Should Government Have E-Record of Every Woman Who's Had an Abortion? 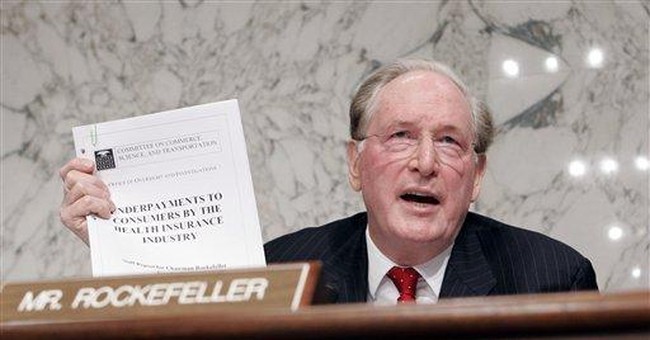 Should doctors and hospitals be required by the federal government to maintain a national network of electronic health records for every individual in America that indicates, for example, whether that individual has had an abortion, a sexually transmitted disease, a mental illness or a drug problem?

Such a system has already been mandated by the stimulus law enacted in February, and politicians in Washington, D.C., would now prefer not to answer straightforward questions about it.

Americans should not let them get away with it.

The stimulus law provided for "the development of a nationwide health information technology infrastructure" that would include an electronic health record for "each person in the United States by 2014."

The law says these records should contain each person's "medical history and problems lists."

This system holding each American's "medical history and problems lists," the law says, will allow for "the electronic linkage of health care providers, health plans, the government and other interested parties to enable electronic exchange and use of health information among all the components in the health care infrastructure in accordance with applicable law."

When President Obama was pushing his health care plan earlier this year, he pointed to this system as a way the government would save money on health care -- and indicated that a person's full medical history would be included in the system.

"You shouldn't have to tell every new doctor you see about your medical history, or what prescriptions you're taking. You should not have to repeat costly tests," Obama told the American Medical Association on June 15. "All that information should be stored securely in a private medical record so that your information can be tracked from one doctor to another -- even if you change jobs, even if you move, even if you have to see a number of different specialists. That's just common sense. And that will not only mean less paper-pushing and lower administrative costs, saving taxpayers billions of dollars; it will also mean all of you physicians will have an easier time doing your jobs."

At a town hall meeting in Annandale, Va., on July 1, Obama argued that the electronic-health-records system would also reduce medical errors.

"We have to build on the investments that we've made in electronic medical records," said Obama. "We already made those investments in the Recovery Act -- because when everything is digitalized, all your records -- your privacy is protected, but all your records (are) on a digital form -- that reduces medical errors."

Speaking at AARP headquarters on July 28, Obama said the electronic-health-records network would substitute for people having to "relay their entire medical history" to each new health care provider.

"We're also working to computerize medical records, because right now too many folks wind up taking the same test over and over and over again because their providers can't access previous results or they have to relay their entire medical history, every medication they've taken, every surgery they've gotten, every time they see a new provider," said Obama. "Electronic medical records will help to put an end to all that."

On the face of it, the system created by Obama and Congress in February is designed to record when any person in America has diabetes, contracts strep throat, breaks an ankle -- has an abortion, contracts HIV or suffers a nervous breakdown.

On Monday, CNSNews.com White House Correspondent Fred Lucas asked White House Spokesman Robert Gibbs whether he agreed with Kennedy that people would be able to prevent abortions and certain diseases from being listed on their electronic health records.

Even though Gibbs' boss has been promoting the system as one that will substitute for a person having to tell a new doctor about "every medication" they have ever taken or "every surgery" they have ever undergone, Gibbs said he had "no idea" whether someone would be able to keep abortions and some diseases out of the record.

"I'm not a health IT expert. I would direct you to somebody -- I have no idea," said Gibbs.

If Obama's health care plan is enacted, not only will the government subsidize the health care of Americans making up to 400 percent of the poverty level, it will also know what health care Americans have gotten and are getting.

Liberals who used a bogus "right to privacy" to violate the right to life of unborn children now seek to annihilate the real right to privacy of everyone in their quest to socialize medicine.