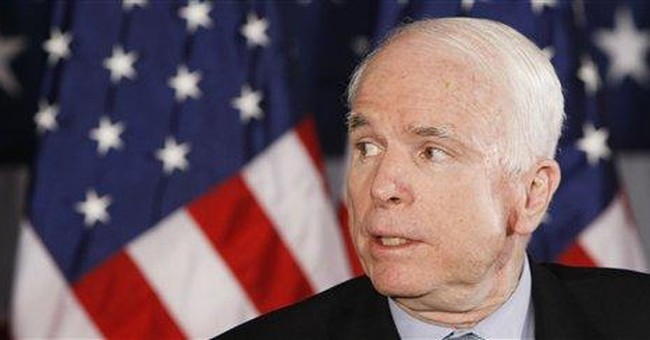 One thing Barack Obama, Hillary Clinton and John McCain all have in common is that they voted to give retroactive Social Security benefits to illegal aliens who committed document fraud.

Indeed, McCain voted for it before he was against it.

On May 18, 2006, when the immigration reform proposal advocated by McCain was on the Senate floor, Sen. John Ensign of Nevada offered an amendment.

As written, the bill immunized illegal aliens from being prosecuted for document fraud, including using a stolen, or a fake, Social Security number. Additionally, the bill did not stop the current practice of allowing aliens who are eventually granted permanent legal residency to go back and claim credit with the Social Security Administration for work they did as an illegal.

Thus, the immigration reform proposal advocated by McCain in 2006 would not only have added millions of illegal aliens to Social Security rolls, it would have protected these aliens from being prosecuted for fraudulently using other people's Social Security numbers.

Ensign sought to buffer the blow of this double-barreled attack on fiscal responsibility and the rule of law. His amendment let stand the provision granting illegal aliens immunity from prosecution for document fraud, but it denied them the ability to claim Social Security benefits based on work they did while fraudulently using someone else's -- or a fabricated -- Social Security number.

When Ensign's amendment came up, McCain tried to seize the moral high ground by suggesting supporters of Ensign's amendment were trying to confiscate someone's "nest egg." "If this amendment is enacted," he said in a floor speech, "the nest egg that these immigrants have worked hard for would be taken from them and their families."

"I believe the amendment is wrong," McCain said.

Ensign did not "calm down" and go away.

"Is he aware that it is a felony to use someone else's Social Security number?" Ensign asked of McCain.

"I am aware of that," McCain said.

"Under this legislation, we forgive that felony," said Ensign. "We grant amnesty for that felony."

Now, the Straight Talker double-talked. "Under this legislation," McCain responded, "we allow the illegal immigrants a path to citizenship which, if they are convicted of felonies or misdemeanors, according to an amendment, then they would be ineligible to embark on that path to earn citizenship"

Ensign neatly parsed this evasion. "Right," said Ensign. "But ... in Sections 601 and 614 of the legislation, it actually ensures that aliens who receive legal status cannot be prosecuted for document fraud, including the false use of Social Security numbers. Is the senator aware of that?"

At this point, McCain had no recourse but to admit he was proposing amnesty from document-fraud prosecution for illegal aliens whom he would put on the path to citizenship. "The senator is aware that when people come here illegally, obviously, they do not have citizenship, so, therefore, any Social Security number they use, whether it belongs to someone else or is entirely invented, is not valid," McCain said.

Shortly, McCain also implicitly conceded that Ensign's amendment would not deprive anybody of a "nest egg" they had saved -- and explicitly stated that it was his intention to give illegal aliens Social Security benefits, which they had no reason to expect, for work they did here illegally.

"Of course they didn't expect to receive benefits they had to pay here illegally," said McCain. "The whole thrust of this legislation is to give them not only Social Security benefits but, as importantly, the protections under the law, as they now live in the shadows and are exploited and mistreated in many cases."

Ensign, by contrast, was trying to protect U.S. citizens from paying taxes to provide retroactive Social Security benefits to illegal aliens who had exploited the government's non-enforcement of both the immigration and document fraud laws.

Ensign's amendment lost by one vote. Obama, Clinton and McCain voted against it.

On Jan. 5, one of the taxpayers Ensign was trying to protect asked McCain a question at a town hall meeting in Peterborough, N.H. He was a legal immigrant from India. "I'm a proud American, and I don't understand, for the love of me, Republicans and Democrats calling illegal immigrants guest workers and providing for them and allowing them all kinds of services," the man said, according to The Associated Press. "And I'm given to understand you endorse some of them."

Unfortunately, no one in Peterborough had the parliamentary privilege to ask the senator to yield.