A Textbook That Should Live in Infamy: The Common Core Assaults World War II 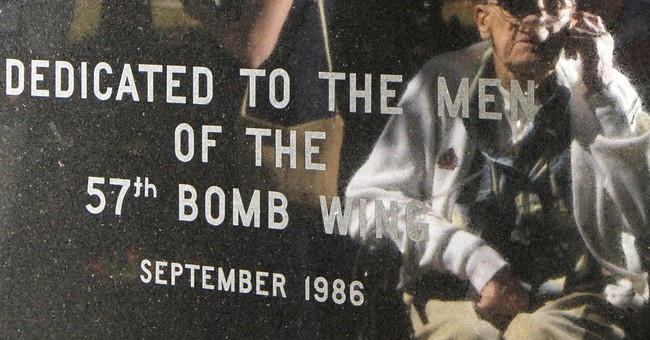 Saturday the 7th of December will mark the seventy-second anniversary of the attack on Pearl Harbor. The commemoration of that “date which will live in infamy” brings up memories of more than Pearl Harbor but of the entire American effort in World War II: of the phenomenal production of planes and tanks and munitions by American industry; of millions of young men enlisting (with thousands lying about their age to get into the service); of the men who led the war, then and now seeming larger than life—Churchill and F.D.R., Eisenhower and MacArthur, Monty and Patton; and of the battles themselves in which uncommon valor was a common virtue: Midway, D-Day, Guadalcanal, and Iwo Jima, to name only a few. Most of us today do not know those events directly but have encountered them in history books. And when we think of World War II, the people who come to mind first are our grandparents: the men and women of the Greatest Generation who are our surest link to the past.

One of the most vital questions for us—grandchildren of the Greatest Generation—is how we will preserve their memory. Ours is the much easier but still important task of making sure that subsequent generations understand the heroism and sacrifice needed to keep America—and indeed the world—safe, prosperous, and free during the grave crisis that was the Second World War. Presumably these lessons not only honor our forebears, who passed on a free and great nation to us, but they also set the example of how we must meet the challenges and crises of our own time. A glance at one of the nation’s leading high-school literature textbooks—Prentice Hall’s The American Experience, which has been aligned to the Common Core—will tell us how we are doing on that front.

The opening page of the slim chapter devoted to World War II called “War Shock” features a photograph of a woman inspecting a large stockpile of thousand-pound bomb castings. The notes in the margins of the Teacher’s Edition set the tone:

In this section, nonfiction prose and a single stark poem etch into a reader’s mind the dehumanizing horror of world war. . . .

The editors of the textbook script the question teachers are supposed to ask students in light of the photograph as well as provide the answer:

Ask: What dominant impression do you take away from this photograph?

Possible response: Students may say that the piled rows of giant munitions give a strong impression of America’s power of mass production and the bombs’ potential for mass destruction.

Translation: Americans made lots of big bombs that killed lots of people.

The principal selection of the chapter is taken from John Hersey’s Hiroshima. It is a description of ordinary men and women in Hiroshima living out their lives the day the bomb was dropped. A couple of lines reveal the spirit of the document:

The Reverend Mr. Tanimoto got up at five o’clock that morning. He was alone in the parsonage, because for some time his wife had been commuting with their year-old baby to spend nights with a friend in Ushida, a suburb to the north.

Further prompts from the margins of the Teacher’s Edition indicate how the selection is to be read and taught:

World War II has been called a popular war in which the issues that spurred the conflict were clearly defined. . . . Nevertheless, technological advances . . . [and the media] brought home the horrors of war in a new way. Although a serious antiwar movement in the United States did not become a reality until the 1960s, these works by Hersey and by Jarrell take their place in the ranks of early antiwar literature.

Have students think about and record in writing their personal feelings about war. Encourage students to list images of war that they recall vividly. [Conveniently, there is a photograph of the devastation in Hiroshima next to this prompt].

Tell students they will revisit their feelings about war after they have read these selections.

The entire section is littered with questions and prompts in this vein and plenty of photos that show the destruction of Hiroshima. In case the students would be inclined to take the American side in this conflict, the editors see to it that teachers will remind the students repeatedly that there are two sides in every war:

Think Aloud: Model the Skill
Say to students:
When I was reading the history textbook, I noticed that the writer included profiles of three war heroes, all of whom fought for the Allies. The writer did not include similar profiles for fighters on the other side. I realize that this choice reflects a political assumption: that readers want to read about only their side’s heroes.

. . . Mr. Tanimoto is on the side of “the enemy.” Explain that to vilify is to make malicious statements about someone. During wartime, it is common to vilify people on the other side, or “the enemy.”

After a dozen pages of Hersey’s Hiroshima (the same number given to Benjamin Franklin in volume one of The American Experience), students encounter the anti-war, anti-heroic poem by Randall Jarell, “The Death of the Ball Turrett Gunner.” The last line in this short poem sums up the sentiment: “When I died they washed me out of the turret with a hose.” The textbook editors zero in for the kill:

Take a position: Jarrell based his poem on observations of World War II, a war that has been called “the good war.” Is there such a thing as a “good war”? Explain.

Possible response: [In the Teacher’s Edition] Students may concede that some wars, such as World War II, are more justified than others, but may still feel that “good” is not an appropriate adjective for any war.

So, class, what are your “feelings” about war—and World War II in particular—now that you have read these two depressing selections in “early anti-war literature”?

There is more than a little sophistry taking place here: an alarming superficiality and political bias that pervades all the Common Core textbooks (as I have illustrated in my book The Story-Killers: A Common Sense Case Against the Common Core). There is no reading in this chapter ostensibly devoted to World War II that tells why America entered the war. There is no document on Pearl Harbor or the Rape of Nanking or the atrocities committed against the Jews or the bombing of Britain. The book contains no speech of Winston Churchill or F.D.R. even though the reading of high-caliber “informational texts” is the new priority set by the Common Core, and great rhetoric has always been the province of an English class. There is not a single account of a battle or of American losses or of the liberation of Europe. The editors do not balance Jarrell’s poem with the much more famous war song “Praise the Lord and Pass the Ammunition” that ends with the line, “And we’ll all stay free!” The rest of this chapter consists in a poster of a junk rally to gather metals for the making of munitions, a New York Times editorial, and a political cartoon penned by Dr. Seuss (who supported the war). There is not a single document or sentence in the chapter that would make a young reader consider the Axis Powers anything other than “enemies” in quotes. Essentially, all of World War II has been reduced to dropping the bomb and consequently, we are led to believe, America’s inhumanity. In short, the entire presentation of the Second World War is not an exercise in critical thinking; nor will it make students “college and career ready.” This is not teaching. It is programming, pure and simple.

“But we did drop the bomb, didn’t we?” Yes, we did. But if we are to make World War II, and Hiroshima in particular, a subject of discussion in an English literature class, then we should at least provide a few facts. The Japanese never showed any sign of surrender until after Nagasaki, the dropping of the second bomb. That meant that an invasion of Japan was the only alternative to the bomb. The Japanese were prepared to defend the mainland with 2.5 million troops and a civilian militia of millions more. American deaths would likely have been in the hundreds of thousands, and Japanese casualties, both military and civilian, could have been more than a million. Furthermore, a small detail that is left out of virtually every high-school textbook is worth considering. American planes dropped three-quarters of a million leaflets urging the people of Hiroshima to evacuate the city. That pamphlet is a document you will never see in a Common Core textbook.

Since the Prentice Hall editors are not above appealing to teenage feelings to make their point, let us give them a taste of their own medicine.

Imagine you are a ten-year-old child living in 1945. You have only distant and passing memories of your father, who enlisted in the Marine Corps as soon as the war broke out. You write him every week, and your mother writes him every day, but his letters come in spurts due to interruptions in communication. Your mother shields you from most of what goes on, but you know he barely escaped with his life at a place called Guadalcanal. Because of his experience and his unit, he will be either in the first or second assault wave on the Japanese mainland. He has an eighty percent chance of being killed. Would you want President Truman to order the dropping of the bomb to keep your father from being killed, as well as saving thousands more American servicemen and even Japanese civilians and soldiers?

This is not fiction. This was a reality faced by hundreds of thousands of American families whose husbands and fathers were deployed in the Pacific theatre. Somehow we have forgotten that reality.

It is really a very simple question. Do we want the memory of our grandparents to be left in the hands of progressive ideologues and armchair utopians who have the advantage of living in a free and prosperous country (for now) due to no expenditure of blood, toil, tears, or sweat of their own? Do we want the children just now entering school and in the years to come—who may have never met their great-grandparents—to be made ashamed of that Greatest Generation, of America, and of our resolution to remain free?