Emotional Learning Will Be the Downfall of Society

Teresa Mull
|
Posted: Mar 10, 2018 12:01 AM
Share   Tweet
The opinions expressed by columnists are their own and do not necessarily represent the views of Townhall.com. 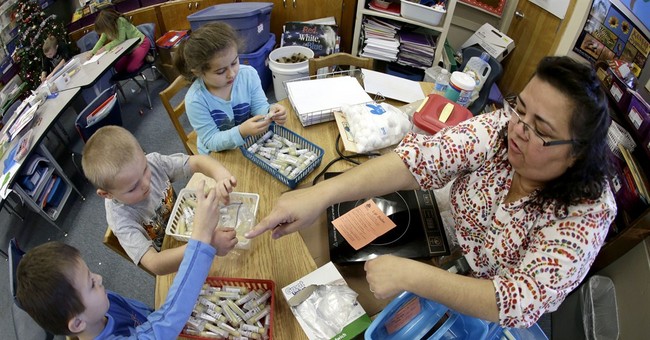 Critics of the public school system, myself included, often disparage government schools for failing to teach kids. Yes, it’s alarming U.S. students continue to lag academically behind their international peers (only about one-third of high school graduates are prepared for college), and it’s pathetic most students test very poorly in geography, civics, reading, and math. As bad as it is that schools aren’t teaching our kids important areas of learning, it’s what they are teaching that should really frighten us.

Increasingly, more schools are adopting an aggressively progressive curriculum. In Minnesota, “School leaders adopted the ‘All for All’ strategic plan—a sweeping initiative that reordered the district’s mission from academic excellence for all students to ‘racial equity,’” The Weekly Standard reported in February. Children in kindergarten are expected to become “racially conscious” and examine their “white privilege.” And leftists’ radical agenda is taking hold in a less blatant but no less toxic way in the rise of social and emotional learning (SEL), which presents just as much danger to parents, kids, and the education system as Common Core.

SEL is “a coordinating framework for how educators, families, and communities partner to promote students’ social, emotional, and academic learning,” the Collaborative for Academic, Social, and Emotional Learning (CASEL) states on its website. CASEL is one of the masterminds behind the SEL movement. “A growing number of schools and districts” are “imbedding” SEL into “English Language Arts, Math, Social Studies, and general teaching approaches,” CASEL reports.

The way children “feel” about their skin color is likely a product of SEL making its way into Minnesota schools’ social studies curricula. But how do emotions come into play in a straight-forward subject such as math? For me, I suppose I could talk about how just thinking about math makes me sad, because I’m terrible at it and it’s difficult, but how is such a thing profitable, let alone appropriate, in the public school setting?

SEL teaches kids to feel and not to think. Of course, feelings themselves are not bad or dangerous, but they can be when they aren’t tempered with a sense of right and wrong. Traditional public schools, apparently determined not to teach kids history, how to read, spell, add, subtract, multiply, or anything useful, instead take on a role of psychotherapist (and not a good one).

The problem is not that children have emotions, but that government schools can’t acknowledge that absolute truth and right and wrong exist, let alone what truth, right, and wrong are. So, we have a bunch of kids trained to embrace their feelings—and since feelings can’t be right or wrong, society devolves into chaos. As Brian Eno, an English musician and composer, once stated so eloquently, “Feelings are more dangerous than ideas, because they aren’t susceptible to rational evaluation. They grow quietly, spreading underground, and erupt suddenly, all over the place.”

As we’ve seen over and over, the eruption of feelings at colleges, such as recently at the University of California at Berkeley and University of Virginia, has become all too common. Many Americans, especially younger Americans, are products of a nihilistic society. They now feel emboldened to express their disagreement, even to the point of violence, because they have no sense of morality, and they’ve been told since kindergarten that their feelings are always valid.

It’s not the kids’ fault, but if society continues to erode into a soulless, violent nation full of mob-like citizens who only feel and react like barbarians and don’t think like civilized folk, we are all to blame. Traditional public schools, it’s been decreed, don’t have a place in teaching religion, morals, or anything that makes a strong, decent society, so we must ask ourselves: Do they have a place in analyzing the feelings and emotions of students—or even in society at all?

Teresa Mull (tmull@heartlaand.org) is a research fellow in education policy at The Heartland Institute.