Suzanne Fields
|
Posted: Feb 16, 2018 12:01 AM
Share   Tweet
The opinions expressed by columnists are their own and do not necessarily represent the views of Townhall.com. 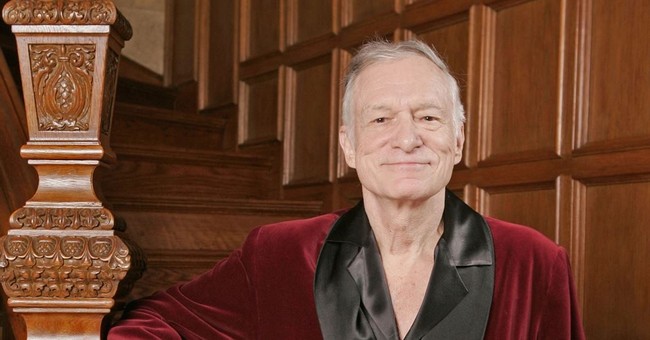 Playboy magazine, now a relic in the legacy of its founder, Hugh Hefner, was not so long ago the sex educator of the young men of America. So pervasive was its influence that a running joke at the time was "a generation of men, having learned about the female body from Playboy's famous centerfolds, were astonished on their wedding nights to discover that their wives don't come with staples in their navels."

Pop nudity was a rationed commodity when Hefner's magazine made marketing sex almost legitimate, and made him a rich hedonist in silk pajamas and a dark-green velvet jacket surrounded by ladies dressed like bunnies with long ears and fluffy tails. The magazine was thought a little bit naughty.

The latest entry of arrogantly virtuous feminist pretense is a clutch of women posed naked down to their nether regions in a spread in the Sports Illustrated Swimsuit Issue (it gets its own capital letters). This may look like the familiar soft-core objectification of female beauty, with women undressed for the smirks and grins of lascivious men, but that's only because we don't understand the latest definition of empowerment.

In the words between the pictures, a feature titled "In Her Own Words" offers up photos of women with words on their naked bodies, as if written by a felt-tip pen. This is truth spoken to power, or at least the power of the editors. The issue was posed for by women, directed by women and photographed by women. One model is dressed only in "truth" written in all capitals down her seductive side from bosom to buttock. The word is her power (or at least her allure). In this latest skirmish of the war between the sexes, women bare more than arms.

Looking at these nude models feels a lot like skinny-dipping, evoking more nostalgia than power, but the editor in charge, one MJ Day (malelike initials only) calls it "a real opportunity" for the models "to be who they are." It was conceived before Harvey Weinstein exploded on the scene, but she told Vanity Fair that there's a naked connection to the #MeToo movement.

"It's about allowing women to exist in the world without being harassed or judged regardless of how they like to present themselves," she said. "That's an underlying thread that exists throughout the Swimsuit Issue. You have Harvard graduates, you have billion-dollar moguls, you have philanthropists, you have teachers, you have mothers, you have a full range of women represented ... and not one of them failed because they wore a bikini." We can be sure she's right about that.

Palaver like this passes for power rhetoric these days because many women want to relate whatever they say to the #MeToo movement, eager to join a protected species. But it sure sounds like satire. Consider the fetching Robyn Lawley, a model without line, wrinkle or hair on her body, a signboard of perfect flesh, arrayed horizontally like Gulliver before the Lilliputians and bearing the message "nurturer," "mother," "human." She says she wants to appeal to women with stretch marks, rolls and even cellulite. "We become so obsessed with our exterior message; we give no thoughts to what's in our heads," she says.

Such confused attempts at conversation about women in culture proliferate in public discussions. Brave women have successfully called out piggish men who abused them, both verbally and physically, but distinctions are blurred for men as well as women. Paulina Porizkova, a model who wears TRUTH (all capitals again) on her naked body, observes that in the flesh business, "you almost get offended if you did not get harassed." Such an unharassed woman might ask, "What is wrong with me?"

The confusion almost makes a body long for Grandma Grundy, the pious dowager of Victorian England who covered piano legs lest they inflame the libidos of passing men. It's silly, of course, but no sillier than the editor of the Sports Illustrated Swimsuit Issue shilling for nudity as emancipating and empowering women in the #MeToo culture.

Liberation means many things to many women, but showing nude women in a sports magazine is hardly one of them. Better to watch the Olympics and look at those incredible women who aim for the gold.