Hillary Reveals How She Never Learned to Play the Game

Suzanne Fields
|
Posted: Sep 15, 2017 12:01 AM
Share   Tweet
The opinions expressed by columnists are their own and do not necessarily represent the views of Townhall.com. 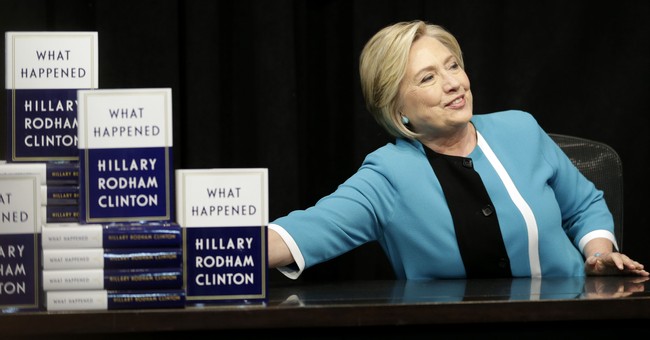 Feminist politics turned a corner with the final defeat of Hillary Clinton. You can feel it in and between the lines of her blame-game book "What Happened." The exuberance of her supporters, which buoyed her in her campaign to be elected the first woman president, has dissipated. All she has left is a memoir of an angry woman raging that her time has passed, that the abundant fruit of opportunity that fell from the family tree was crushed beyond hopes of redemption and there's nothing left to put in a new bottle but old whine.

Clinton was always about sexual politics. She wasn't the right kind of woman to be the first woman president. She was dependent on the old pre-feminist attitudes she scorns, and she didn't know how to manipulate attitudes to her advantage. Getting a man who could get there first was crucial to her strategy, and after she got the man, Bill Clinton, she didn't know how to make the strategy work.

Unlike former British Prime Ministers Margaret Thatcher or Angela Merkel, she had to suffer through the powerful-man syndrome with a husband whose hand in marriage pulled her onto a national stage, first in the unfamiliar territory of Arkansas as a governor's wife and then at the White House as the first lady. In Arkansas, after an education at Wellesley College and Yale Law School, she was slow to learn to read the local political culture. She kept her maiden name, which enraged the good ol' boys, infuriated their wives and cost her husband re-election for a traditional second term.

She then took his direction and his name, put on more womanly clothes and made friends with the natives. She returned with Bubba to the governor's mansion again. This time, reluctant or not, she was a dutiful "wife of."

Many of Clinton's college classmates thought she was destined to be the first woman president, but she wouldn't gamble on entering high-stake politics under her own power. She gained power through marriage, cultivating a choice made when she was young and collecting connections formed through her husband. But these connections failed her when she went for the prize at the top.

Clinton never transcended her pacts with the devil or learned how to apply the crucial touch of authenticity necessary for success in the public arena. Substance became secondary. Her lack of message, or even her lack of identity as "liberal" or "moderate," as revealed in the infamous leaked emails of her campaign staff, was the fatal flaw. Nobody trusted her.

She was popular enough with her colleagues in the Senate, but they understood that she was only biding her time. After her failed run for the presidency in 2008, the Senate became a lackluster nest, and she leaped at the opportunity to show her mettle as secretary of state. Her most visible accomplishments were the frequent miles she traveled, and the number of countries visited, rather than any substantive achievement.

Feminists raised their voices as Clinton rose to run for president a second time. Gone were the assurances of her first campaign: that she was not running as a woman but as someone who could get things done. Her age was showing, and she failed to galvanize the younger feminists who had imposed more rigorous standards for the sisterhood. Standing by her man had once served both her and Bubba well, but women from Bubba's earlier life reprised nasty accusations of crude sexual aggression in 2016. This diluted the impact of then-candidate Donald Trump's "locker room" tape.

Slick Willy was an alley cat, but he was a natural at the game of politics. The Clintons were always a package marketed as "buy one, get one free," and fervent feminists revealed themselves as hypocrites by supporting her supporting him. Many women, particularly in flyover country, wouldn't buy that.

With the powerful insight of hindsight, Clinton's looking to triumph as a feminist using her husband as a stepping stone was never going to work. Bubba played by the old rules of masculinity, and she was vulnerable to the new rules of feminism. Theirs was a clash between personal politics and cultural perception. She now says she never wanted to be the "woman candidate" but rather "the best candidate" whose experience as a woman in a male-dominated culture had made her sharper, tougher and more competent. That's not how it happened.

It's not at all clear why she wrote this book because it opens sores to settle scores and is a reminder of past failure, not something to soothe the pain of those whom she let down. It's a tale of a woman scorned, not by one man but "millions of white people," as she glibly formulated it in an interview with Jane Pauley of CBS. She blames the "sexism and misogyny" of those millions. They blamed her, and they got the last word.

Share this on Facebook
Tweet
Chris Cuomo's Termination Came Just Days After He Was Accused of Sexual Misconduct
Landon Mion
Bob Dole Dead at 98
Rebecca Downs
Omar Slams McCarthy as a 'Liar and a Coward' for Refusing to Condemn Boebert Comments
Landon Mion
Oregon May Actually Make Its Mask Mandate Permanent
Rebecca Downs
Chris Cuomo Has Been Fired, And Supposedly Even More Information Has Come Out
Rebecca Downs
Even More Key Democrats Are Getting Caught Up Engaging in Mask Hypocrisy
Rebecca Downs