No 'Safe Place' for an Education

Suzanne Fields
|
Posted: Sep 08, 2017 12:01 AM
Share   Tweet
The opinions expressed by columnists are their own and do not necessarily represent the views of Townhall.com. 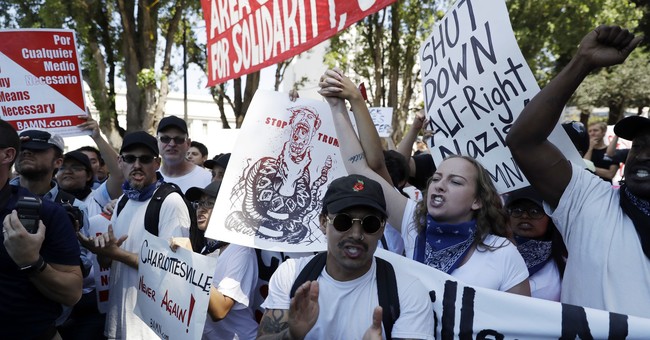 America got lost on the way to the 21st century. Many Americans lost pride in being American and no longer cherish the rigors of the First Amendment, which gives pride of place to freedom of speech. This didn't happen in one generation, though the baby boomers, born after the soldiers came marching home in triumph in 1945, grew up nursing grievance. This led to crucial changes in attitude, and succeeding generations felt empowered by rebellion.

The personal became political. Prosperity and privilege offered bigger and better stages for opposition all across the culture. Perceptions about the best way to bring about change became the subject for debate. The rebels, who rarely see issues in shades of gray, discovered the campus as a perfect environment to control the debate on the issues that affect everyone.

The University of California, Berkeley established a new tone for rebellion in 1964 and 1965 with its "free speech movement." It quickly spread to other campuses as the young, immature and imbued with a self-righteous view of themselves and the world, drank in the intoxicating power of protest. Their anger couldn't always be controlled or aimed in a right direction, but there was general respect for the idea that it should be channeled into debate, that the rules for free speech should adhere.

A half-century on, Berkeley struggles to maintain that intellectual respect for free speech. The thugs of antifa, the far-left-leaning militant groups, were brought out last week in attack of conservative protesters. These thugs don't think anyone who disagrees with them should have access to lectern or microphone. They were joined by Berkeley Mayor Jesse Arreguin, who said, "I obviously believe in free speech." To prove it, he urged the university to cancel controversial conservatives' plans for Free Speech Week next month.

One ray of hope is that the new chancellor of the university, Carol T. Christ, is no snowflake. She has an understanding of the First Amendment and its importance to university life. In the wake of the Charlottesville riot, she made a firm and unequivocal defense of free speech rooted in the law to students, faculty and staff.

"Public institutions like UC Berkeley must permit speakers invited in accordance with campus policies to speak, without discrimination in regard to point of view," she told them. "The United States has the strongest free speech protections of any liberal democracy; the First Amendment protects even speech that most of us would find hateful, abhorrent and odious, and the courts have consistently upheld these protections."

She understands the value of speech goes beyond legal protection and is fundamental "both to our democracy and to our mission as a university." The proper response to hate speech is more speech, not shutting down speech. She doesn't name the snowflakes but tells them they could benefit by cultivating corrective arguments and developing an inner resilience, "which is the surest form of safe space."

Historically, the campus provides the perfect environment for debate. In the 1960s, the Vietnam War was the galvanizing issue. Then the civil rights movement and women's liberation movement forced significant changes, and the campus became a microcosm for how to make the changes work. But, as in many successful rebellions, those who inherited the good didn't always appreciate how the good was brought about. On the campus "Know thyself," by which the Greeks meant self-examination in the broadest philosophical sense, was recrafted to "know thy identity" through a narrow social lens.

Liberation of the sexes gave increased autonomy to young men and women. But many colleges abandoned protective rules and regulations, and this inevitably made insecure students afraid of their independence and unwilling to face up to the challenges, whether in literature or social relationships, that are crucial to gaining an education and growing up. They demanded so-called trigger warnings for exposure to ideas that challenge and invite intellectual confrontation.

Life in the academy changed utterly. Students who were taught to cherish open minds and the opportunities to challenge ideas through debate began to seek security behind moral preening and political correctness. Truth was sacrificed on the altar of mere feeling, both personal and political. Self-righteousness replaced self-examination.

Carol Christ credits John Stuart Mill's essay "On Liberty" as the powerful argument for freedom of speech and reassurance that truth has such power that it will ultimately prevail. Mill's argument carries another truth to the rebels: "He who knows only his own side of the case knows little of that."