The Presidential Candidates We Deserve

Suzanne Fields
|
Posted: Oct 14, 2016 12:01 AM
Share   Tweet
The opinions expressed by columnists are their own and do not necessarily represent the views of Townhall.com. 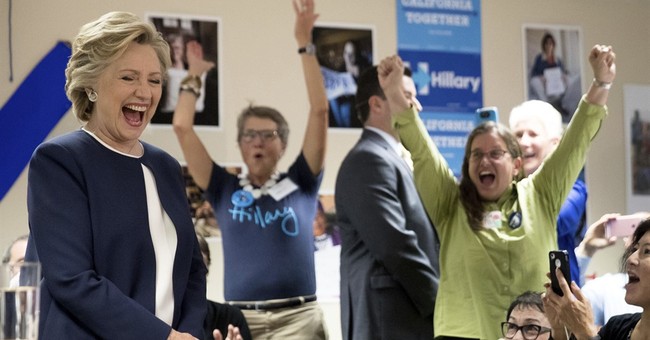 Trending
Donald Trump and Hillary Clinton are only an accurate reflection of our culture of vulgarity and hypocrisy. Both of them. They're the candidates we asked for. The country may not deserve them, but we the people do.

Trump is basically a reality star, whose wealth and celebrity as a business tycoon pushed him into the spotlight of the 24/7 world of television news and entertainment -- that's abetted and augmented by the internet. He rose to celebrity with a natural spontaneity, a comedic cruelty and a gift for getting others to reveal telling bits and pieces of their personalities under brutal cross-examination. He made the decisions for other people with consequences, often not happy ones, and his verdicts traveled with the speed of light across a titillated tweetdom.

"You're fired!" are the two harshest words to hear in any workplace, but on reality TV it's merely sport. Instead of lions at the Colosseum, we get pained expressions on a cool screen and are entertained by the pain of others. The medium numbs the sensibilities by reducing responsibility and analysis to melodrama. This is not "there but for the grace of God" but "There goes that loser, not me. Ha-ha." Ratings soar.

Television consistently blurs the line separating politics and entertainment, and Trump emerges as the first fusion candidate for president. He dispatched his opponents in the primaries with the glibness and ease that he dispatched would-be apprentices on his TV show. The result was not so much a coarsening of politics as a coarsening of audiences who found it entertaining to watch.

Networks gave Trump exposure because he gave them the ratings they maliciously covet and treated him more as an entertainer than a politician who happened to be running for the office of leader of the free world. This is the new political realism: sensationalism over substance, emotion over analysis, titillation over thoughtfulness, greed over the public good.

Clinton's rise to power has been more circuitous, as is required of a woman in a radically empowered feminist world. She envisioned rising to the top through marriage to a man she calculated would get there first. As his sidekick, she would follow in his footsteps, even at the price of personal public humiliation (and even if in heels).

"Tough times make a monkey eat red pepper," my father used to say. Clinton developed a tolerance for cayenne, habanero, serrano and even red-hot Bubba early on. When Bill Clinton cheated on her, first in Little Rock, Arkansas, and then in Washington, D.C., she dished out pepper of her own to the ladies, by scorning them as bimbos, trailer trash and looney tunes. If that meant reprise after Bill's sexual offenses on national television, that was a small price to pay for a ticket to power.

The sisterhood, which usually stands by women taken down by sexual predators and power brokers, saw Hillary Clinton as its best bet for the first woman in the White House. It was no great task to change its tune from a roaring defense of the vulnerable to something echoing the rap lyrics of the Broadway sensation "Hamilton," like "I am not throwing away my shot." Throwing Bill Clinton's bimbos under the bus in the White House driveway was just a necessary power play.

Feminism now steps up to a new stage. Women must break through the crass ceiling to get to the one of glass. They must fake shock at Trump's lewdness in the way that Capt. Renault in "Casablanca" was "Shocked! Shocked!" to learn that gambling was going on in the casino at Rick's cafe.

But shock can be a hard sell when schlock dominates the market. The New Yorker magazine, the bible of culture and taste for the beautiful people, quoted Amy Schumer, one of Hillary Clinton's celebrity supporters, telling audiences how my "p---- ... smells like a small barnyard animal ... a goat at a small petting zoo." That's just the language onstage. Offstage, in a roundtable discussion with other female comedians -- indulging in bawdy banter that might embarrass the Donald -- Schumer describes the sex romps in her movie, "Trainwreck," in the crudest possible way. The ladies were joking, no doubt; it was a "private conversation," after all.

Not to be outdone by Schumer, Lena Dunham, who's all-in for Clinton, boasts that on the set of "Girls" -- her HBO sitcom that's all the rage -- "There's not one guy on that show who hasn't seen the inside of my vagina." Then the raunch gets really raunchy.

The sin of hypocrisy, the theologians tell us, is the evil that walks invisible. Now that the medium has become the message, nothing remains invisible. The proof lies all about us.