Suzanne Fields
|
Posted: Feb 12, 2016 12:01 AM
Share   Tweet
The opinions expressed by columnists are their own and do not necessarily represent the views of Townhall.com. 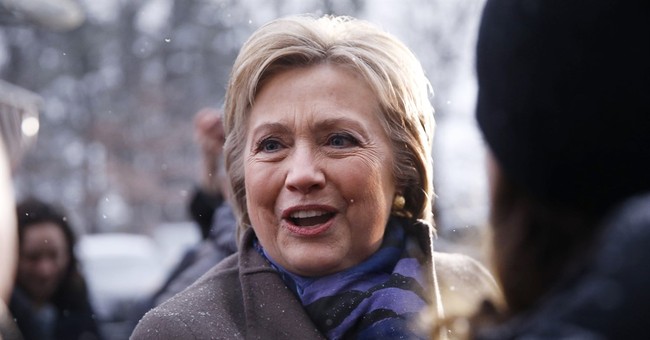 Trending
Feminism is the hydra-headed monster stalking Hillary Clinton's campaign for president. She once thought her appeal to women, as the first of her "gender" to get a real crack at the presidency, was straightforward, unambiguous and unstoppable, but now she can't hear the cheers for the cacophony of squabbling female voices.

The first wave of feminism, in the 19th and early 20th centuries, appealed to a new version of womanhood. But after winning the vote with the 19th Amendment, most of the "new women" retired to the hearth and nursery to look and act a lot like their grandmothers. Women in those bad old days were not expected to have an opinion until they married and were told by their husbands what their opinions were.

Second-wave feminism sought a level playing field with men, equals in work and sex, and led to an expansion of women's rights in education, property and professions, as well radical changes in the rules of engagement between men and women. The initial cry in Betty Friedan's "The Feminine Mystique" in 1963 emphasized the demand for a woman's right to explore her options and opportunities, just like men. Exactly what those options and opportunities should be, however, quickly diverged, depending on a woman's social, ethnic and economic background.

The latest wave of feminists are digging up the playing field, leaving it scarred with the pot holes of varying points of view, which makes it particularly difficult for older feminists to avoid tripping on a landscape that keeps changing under their feet. That's how and why Gloria Steinem, the 81-year-old dowager bunny, once the Playboy Club sexpot in rabbit ears and a cotton tail, on a mission to expose sexism and male chauvinism, misspoke this week when she misread the motives of the latest generation of women on fire for Bernie Sanders.

When Bill Maher, the comic-cum-commentator, asked her how the former secretary of state could be losing to a man, the dowager bunny replied that women generally don't start getting serious about politics until they're older. "When you're young, you're thinking, 'Where are the boys?' The boys are with Bernie."

After a wave of outrage from young women proudly "feeling the Bern," Steinem retreated with an apology. But then Madeleine Albright, the 78-year-old first female secretary of state, amused only herself by hauling out a hoary slogan from an earlier century at a Clinton rally in New Hampshire. "There's a special place in hell for women who don't help each other," she said, suggesting that the bad place is where young women with defective memories, who need a good dose of the old-time religion, belong. Clinton and the old guard cheered raucously. But it wasn't funny to anyone else, and exposed a fault line in the sisterhood.

Older feminists such as Gloria Steinem and Madeleine Albright have a sense of earned entitlement and such thinking simply doesn't resonate with young women, nor does it dictate their politics. Defending Madeleine Albright on "Meet the Press," Clinton stressed the importance of going back two decades, reminding the new generation of young women of "what a struggle it has been, and (Albright) understands the struggle is not over."

Fair enough, but that's a reinterpretation of partisan positioning, and a lot of young women aren't buying it. They're not interested in "gender politics." Many of these young women judge candidates by a longer yardstick than mere sexual determination, and describe Bernie Sanders' "straight talk" as more in tune with their sensitivities than Clinton's strident belligerence. Trustworthiness was a bigger and more important factor in New Hampshire. Clinton won the women's vote in Iowa by 11 points, as measured in the exit polls, and Bernie Sanders won them by the same 11 points in New Hampshire. Sixty-nine percent of women under 45 voted for him.

Feminism is a loaded word nowadays, and many women use it uneasily. Values, like politics, are changing. "Bonding within the sisterhood" has only been for liberal women. Conservative women need not apply. "Pro-life" and "pro-choice" attitudes are almost evenly divided as moral and political positions in the culture, but in the ranks of feminists, being "pro-choice" is the litmus test for joining the club.

Megyn Kelly, the Fox News commentator, was asked by Stephen Colbert to make an assessment of modern feminism. She says she thinks it has been co-opted by those "who don't want you in their club unless you see certain women's issues the way they see them." That's how Gloria Steinem and Madeleine Albright sound to the young women hot for Bernie. They hear the aging feminists as "clueless" and "shaming." They're two of the hydra-heads ruining the cakewalk Clinton thought she had coming.