Finding More Than Faults on the All-American Holiday 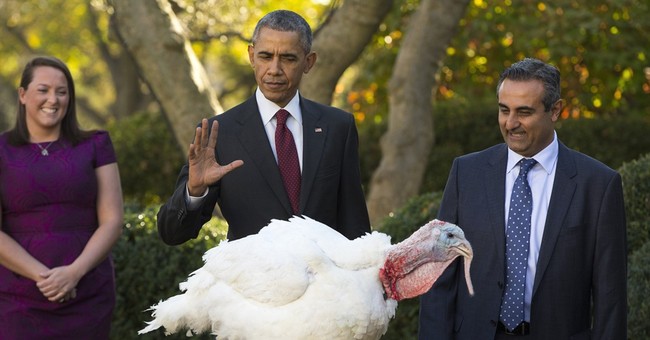 Has anybody seen Norman Rockwell? We gather together for the Thanksgiving holiday and a few days of family togetherness. The tables are groaning under time-honored dishes of our pilgrim forefathers, or so we like to think. We tell innocent stories about them and their Native American guests (or "Indians," as the first settlers called them). We draw inspiration from rough times, when families came to find freedom to worship in a new land, forging the first chapter of our history.

On Thanksgiving we share our generational perspectives about what happened after that, in stories both uplifting and challenging. The challenging part accelerates these days through harsh words of the politically correct who see only the faults and flaws of those who brought civilization to these shores.

Harmless myths have smoothed over a multitude of differences to call us to unifying pride of country, but many of the privileged young men and women now in college focus only on what they can raise their voices about. Every schoolboy knows that the term "Indian" was based on a navigational mistake by Christopher Columbus, who thought he had landed in India. The term was not used maliciously, but the word took on a life of its own, and changing it was to clarify, not to divide, though it remains controversial.

The clarification of nomenclature expanded to a call for hyphenating all Americans, accentuating identity that sets us apart rather than looking at what links us. The politically correct enjoy a collective "gotcha," emphasizing grievances instead of gratitude.

Elders at the 21st century Thanksgiving table yearn for conversations inclusive of the ideals once depicted on the magazine covers of the Saturday Evening Post, reflecting traditions that bring us together. Norman Rockwell's illustrations of the Four Freedoms, as articulated by Franklin Roosevelt, were not necessarily multicultural, but they symbolized the values that brought waves of immigrants to us.

Today we can enjoy Thanksgiving with a traditional turkey with cornbread dressing, as the pilgrims did, or tofu turkey stuffed with quinoa, with sides of spicy kimchee, Brussels sprouts with chorizo, cranberries in hoisin sauce or even Grandma's mashed sweet potatoes with marshmallows on top.

The personal is political, and the personal is also about the ties that bind family, friends and communities together. Where and when we were born color our reflections on Thanksgiving and our daily conversations. Immigration and problems of assimilation have always been flashpoints of controversy, since a Native American watched the Pilgrims arriving on the Mayflower, turned to a fellow tribesman and grumbled, "Well, there goes the neighborhood."

My father, when speaking of his father, a Russian immigrant, liked to say, "My father was probably not the smartest man in the world, but he was smart enough not to miss the boat to America." He wanted to remind the youngest at the table, who thought they were the smartest, how lucky they were to be Americans.

For Jews, memories of the suffering of forefathers in the shtetls of Eastern Europe, and then the Holocaust, remind us to count the blessings of America even as we mourn the murders of our brothers and sisters. No immigrant is untouched by the history that brought him here, whether of human intolerance and cruelty or the wrath of nature delivering scarcity and famine.

The history of how we receive new immigrants has been decidedly mixed. We have met some newcomers with open hearts, and others with suspicion and distrust. Still others have been denied entry altogether. Many Jews, to draw from my own heritage, were denied entry to the United States when they were trying to escape the Nazis, even though some quotas went unfilled. There were different excuses of why, but at the root of the denial was that some Americans didn't like Jews.

Other immigrants confronted anger and frustration from Americans who feared the new arrivals would take their jobs, or change the American way of life. "The melting pot," coined as a simple metaphor to unify us, often had indigestible lumps in the stew. Syrian immigrants are said to be the lumps today.

We're not, as the president glibly suggested, "scared of widows and orphans coming into the United States." As numerous officials in Congress, the military, the FBI and the CIA have testified, the vetting process needs work. Marco Rubio, a child of Cuban immigrants, observed correctly that if only one in a thousand is coming to take his place in an ISIS sleeper cell, "you have a problem."

We won't settle the current immigration problem during the holidays, but we ought to "pause," as House Speaker Paul Ryan argues, for a debate and to work on the vetting of the arriving migrants. And let's offer thanks to those earlier Pilgrims, who, like my grandfather, didn't miss the boat. Happy Thanksgiving to all.