The Islamist Challenge to the Culture of Light 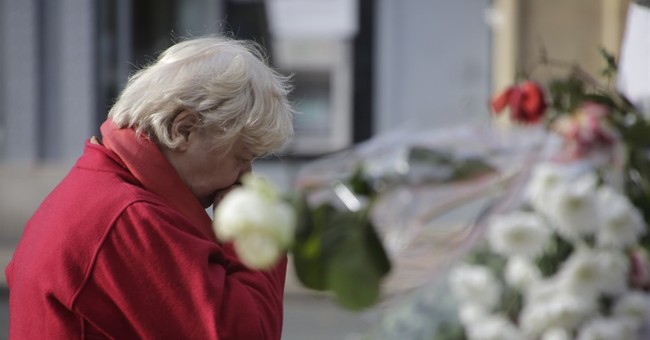 Trending
Two weeks before the Paris massacre, we took our twin granddaughters, age 11, for their first visit to Paris. They live in Berlin and were eager to see Mona Lisa smile, watch artists paint in Montmartre and take a boat trip on the Seine. One night we watched the tip of the Eiffel Tower light up like a sparkler on the Fourth of July (or Bastille Day, if you like). Twenty thousand flashing lights illuminated the sky above Paris for five minutes, as the lights had done every hour from 8 p.m. to 1 a.m. every night since 1999, when they were introduced on New Year's Eve to celebrate the new millennium.

The glorious spectacle of flashing lights showed everyone that the City of Light knows how to brighten the skies. The girls stood in awe, their faces radiant with discovery and illumination, watching the famous landmark up close. At an outdoor cafe later they sipped hot chocolate and nibbled lemon-and-sugar crepes, chattering about how the Eiffel Tower looked like a lacework of iron against the stars of the night sky.

They were stunned when they returned to their home in Berlin to watch the grim events in Paris unfold on television, to see how the Eiffel Tower went dark in mourning, briefly shuttering its lights on the weekend of the massacre, and then quickly returning to life with defiant dignity in the blue, white and red colors of the flag of France.

In their innocence, they could enjoy the monumental scale of the Eiffel Tower and marvel at the engineering genius reflecting power and industry, but struggled to understand how, like the twin towers in America, it could be hated for its technological accomplishment.

Schoolchildren growing up in the West, where the sacred and the secular complement each other, are learning cruel lessons in the ways radical Islamist terrorists hate everything that reflects the joys and rewards of a life lived in peace and tolerance. The terrorists inhabit a culture of death where the goal is to kill everyone else.

The slogans in the aftermath of tragedy attempt to show universal solidarity: "We are all Americans," after 9/11; "Je suis Charlie," after the assassinations at Charlie Hebdo magazine; and "We are all Parisians" now. But the phrases slide glibly over the powerful conflicts and arguments about how to win the war against radical Islam. Either they win, as Marco Rubio says, or we do.

Language can be a powerful tool, employed by both truth and obfuscation, and many of our current leaders and would-be leaders suffer from a belief that oratorical flourishes, euphemisms and verbal gymnastics can be the bullets of persuasion. President Obama continues to blame the rise of terrorism on the war George W. Bush started in Iraq, even as he accelerates the rise of ISIS by withdrawing from the fight.

Hillary Clinton talks out of two (or maybe three or all four) sides of her mouth about the Middle East. She publicly blamed a YouTube video for the deaths of four Americans in Libya, at the same time telling her daughter Chelsea that it was terrorism by Islamic radicals. She objects to describing the war against terrorism as one against "radical Islam," so as not offend the radicals who are trying to kill us.

The war against the terrorists has many fronts. It's a war that requires us to drop bombs from the air, put boots on the ground, and infiltrate the enemy to win the battle for survival. While soldiers engage with guns and bombs, the rest of us must be vigilant against the vast infrastructure of propaganda and indoctrination in Muslim communities, schools and mosques and on the Internet and social media -- in Europe, the Middle East and now here at home in the United States.

Ayaan Hirsi Ali, author of "Heretic: Why Islam Needs a Reformation Now," writes in the Wall Street Journal that verbal jihadism through poisonous pamphlets, books and sermons against the West are "conveyor belts to violence," radicalizing Muslims. Those exposed to the poison are not always aware of how such toxins insinuate violence against people who think differently. The propaganda convinces them that their ends are legitimate before they even turn to the question of means. If the institutions fostering freedom of thought and action are to survive, we cannot ignore how this is happening.

The leaders of today and the leaders who follow must speak truthfully about what is going on and persuade moderate Muslims (and there are millions of them) to speak out, too. But first the leaders must describe the major perpetrators accurately. My grandchildren were pleased to find drawings online that place the Eiffel Tower inside the familiar peace symbol, and that's a soothing symbol for children. But grown-ups need a grown-up language to rally the troops and stiffen spines. Like it or not, the world is at war.