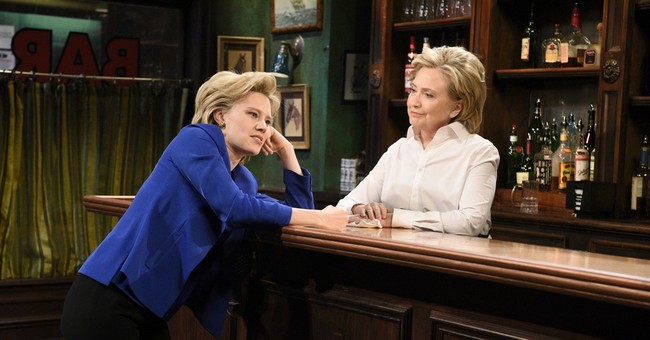 Trending
While the Donald tries to overcome his reputation as an over-the-top television entertainer so he might support his ambition to become president, Hillary Clinton is running for comedienne-in-chief. She went on "Saturday Night Live" to trade her high seriousness for laughs. Neither candidate will seal the deal the way they're trying to do it.

The Donald, who's used to dishing it out, exposes a thin skin when mocked by other candidates, and his shifting numbers suggest that the jump from reality TV to the White House, even in the age of the outsider, is not an easy one. "The Trump Show" continues with jokes. He sent Marco Rubio a case of bottled water and a few hand towels "for (his) sweating" -- heavy-handed snark more than high hilarity.

In a sit-down interview with Lena Dunham, the writer-actress for the popular HBO sitcom "Girls," the former first lady, former senator and former secretary of state revealed a certain desperation as she talked in a framework more suited to adolescent girls in gossipy chatter than to a candidate for presidency. Lena Dunham talked about Lenny Kravitz's wardrobe malfunction, when the singer's leather trousers split in front, exposing the "junk" of the male anatomy. She asked Hillary if she had seen it. Hillary said no, but she'd look for it on YouTube. Giggle, giggle. Girls will be girls. Surely there's a better way to win the vote of the millennials, but, after all, Bubba once took a question about whether he wears boxers or briefs (when he wears anything at all).

Hillary then moved away from raunchiness to scripted satire on the season's premier of "Saturday Night Live." Hillary was a kibitzing bartender named Val, talking to SNL star Kate McKinnon, who reprised her impersonation of Hillary.

But the scenario was less satirical than self-serving, with both Hillary characters oozing banter about how great Hillary was/is. As Val, she's described as "smart," and "really nice in person." When asked to describe herself, the humble, modest bartender says, "I'm just an ordinary citizen who believes the Keystone Pipeline will destroy our environment." The Hillary character concedes that she was a little late opposing the pipeline, but Hillary the bartender runs to her defense. "There's nothing wrong with taking your time. What's important is getting it right." A Bubba character runs away in horror at the sight of two Hillarys. (The rest of us can easily understand.)

Comedy, particularly satire, requires a light touch, and no one accuses Hillary of a light touch. "Saturday Night Live," alas, no longer crackles with the biting irreverence of its golden days, with Jane ("you ignorant slut!") Curtin; or Gilda Radner's skit about Princess Lee Radziwill, Jackie Kennedy's younger sister, returning from the ladies room in an elegant restaurant with a stream of toilet paper trailing from the bottom of her shoe.

Hillary is working hard to make good on her campaign's current aim to make her cool, but pretending to be cool is something like pretending to be sincere. It won't be easy to make her trustworthy just to spike her poll numbers, which have sharply declined in the wake of her continuing email scandal. She should stick to her day job as running for president instead of trying to make it as the star of comic opera. No one expects a comedienne at the first Democratic debate next week.

Hillary is learning what conservatives before her have learned -- that it's hard to be funny when you're supposed to be serious. Liberals are fat targets for humor, particularly satire, but there are few conservative comedians to take aim at them. Dennis Miller, an alumnus of "Saturday Night Live," is an exception. But from his weekly slot in "The O'Reilly Factor" on Fox News, he has become more pundit than funny man, his humor more predictable than off-the-wall.

Alison Dagnes, a professor of political science at Shippensburg University and author of "A Conservative Walks Into a Bar," suggests that "conservatism supports institutions and satire aims to knock these institutions down a peg." Hillary and Bill have become self-aggrandizing political institutions, making themselves inviting targets for satirical barbs, right and left.

Conservatives have many witty social critics. P.J. O'Rourke takes no prisoners in the Weekly Standard; neither does Wes Pruden, who early on dubbed the Clintons "Bonnie and Clod" in The Washington Times. But the printed page requires a lighter touch than a television screen, where political humor usually lands with a thud and no bounce.

More than a hundred years ago Mark Twain understood the peculiar potential for comedy in politics. "The political and commercial morals of the United States," he wrote, "are not merely food for laughter, they are an entire banquet." It's enough to give all of us acute indigestion.