The Amazing Grace in Faith and Grief in Charleston 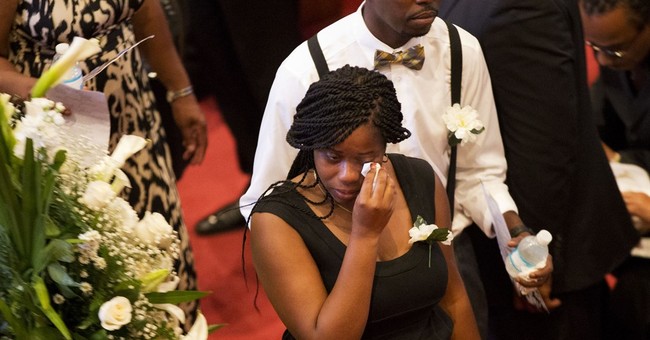 Nothing so moved so many in the aftermath of the Charleston, South Carolina, massacre than the heartfelt expressions of grace and forgiveness for Dylann Roof by the families of the slain. Nothing so astonished the rest of us than the expressions of pity and pleas for mercy for the young man standing before the judge at his bond hearing.

"Every fiber in my body hurts," said Felicia Sanders, whose son Tywanza was killed, "and I will never be the same. But as we say in Bible study, we enjoyed you. But may God have mercy on you."

"I forgive you," said Nadine Collier, whose mother was killed.

Enjoyed? Mercy? How amazing to see such grace in grief. How mystifying and bewildering to find such a generosity of spirit in these crushed and broken human hearts.

How could such a merciless act elicit goodness rather than demands for revenge and vengeance? That is an unanswerable question for someone who does not share the belief that evil must be met with goodness. These churchgoing men and women speak of Christ's commandment as set out by the disciple Matthew in the New Testament: "Ye have heard that it hath been said, 'An eye for an eye, and a tooth for a tooth.' But I say unto you, That ye resist not evil: but whosoever shall smite thee on thy right cheek, turn to him the other also."

These Christians of Charleston's Emanuel Christian Methodist Episcopal Church take their faith to heart. "Hate won't win," said Alana Simmons, granddaughter of Daniel Simmons who was killed in the massacre. "Everyone's plea for your soul is proof that they lived in love and their legacies live in love."

This puts to shame the noisy preeners and righteous pretenders who rush to put themselves on view with their fake piety, exploiting tragedy in the resonance of the public square. The authentic grace of these old-line Methodists reminds us that the civil rights movement grew in strength and effectiveness through faith.

These sentiments echoed the words of Dr. Martin Luther King Jr., so rich in the poetry of the Bible, with metaphor giving voice to congregations joined in peaceful resistance. King refused to accept the "starless midnight of racism and war," believing that "unarmed truth and unconditional love will have the final word."

There was tension between blacks who thought the way to fight prejudice was through peaceful resistance, and others who preached a crusade of force and anger. Barack Obama's pastor, the Rev. Jeremiah Wright, called out "God damn America." There is a world of angry difference in the speeches of Martin Luther King and Malcolm X. King's way won the day and the dismantling of institutional racism began.

Dylann Roof couldn't find a movement in America to channel his kind of hate. He decried the absence of companions in his psychological hell, with "no skinheads, no real KKK," to join him. In his fury he was almost persuaded by the Christians of Emanuel Church. He told an investigator that he "almost didn't go through with it" because the church folks were so nice to him. He sounded like Satan in John Milton's "Paradise Lost," who at the sight of Eve stood "stupidly good," drained of his evil intelligence if only for a single moment, disarmed by her beauty.

Dylann Roof's crime is what we designate as "a hate crime." He was erratic in his hatred, searching for a target. He often hung out with two black drinking buddies, who said he never used the N-word, never made racial slurs. They took his gun away once after he got drunk on vodka and ranted that "blacks are taking over the world," that "someone needed to do something about it for the white race." But they mostly talked about fishing, NASCAR racing and guns. Not about race. His drunken rant hardly reflected the man they knew.

He chose two flag symbols beyond the Confederate banner to express his contempt for blacks, but the flags of Rhodesia and the Union of South Africa were long gone. Isolated in his psychopathology, he was desperate to latch on to something to reflect his lunacy.

The politicians look for meaning where there is no coherent meaning, looking for the quick fix. There is no quick fix, either. Neither exists.

What does exist are the words of Bethane Middleton-Brown, who appeared at the courthouse on behalf of the sister who died at prayer and in contemplation of her faith. "We have no room for hate," she told the killer at his bond hearing. "We have to forgive. I pray for your soul. And I also thank God I won't be around when your judgment day comes with Him."

But the secular law, with the quality of mercy well-strained, waits.