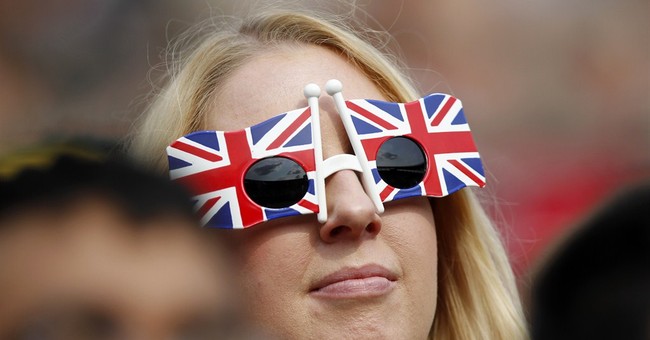 Trending
LONDON -- England is having an identity crisis -- Scotland is just getting over one -- and just in time to hover over national elections.

Gone is the spirit of the poet who described "this earth of majesty, this seat of Mars," so beloved in Shakespeare's Richard II. There's not even a smidgen of Churchillian rhetoric to inspire the British to fight the good fight in the Middle East, where they were so firmly established for so long. Too bad there's no English word for the French ennui.

Under the headline Decline and Fall, the Times of London bemoans that "Britain is punching appreciably below its weight as a medium-sized power in world affairs." There's considerable to worry about. Vladimir Putin's aggression in Ukraine is a needed if dreary reminder of the damage done in the mid-20th century by an ambitious tyrant with a funny mustache.

The London Telegraph speaks a similar sentiment, noting the irony of a meeting of Western officials, to talk about arming Ukraine, in Munich, the very symbol of European appeasement. In 1938 the German-speaking Sudetenland was taken from Czechoslovakia and handed over to Hitler to avoid further conflict. We know how that turned out. Now the Russian-speaking separatists of Eastern Ukraine may be dispatched to the embrace of the bear to appease Vladimir Putin. What message does this send to a Machiavellian leader like Mr. Putin? With Britain on the sideline, the United States, still Britain's most important ally, continues to lead from behind, with Barack Obama wandering somewhere on the back nine.

The concern over Britain demoted to also-ran status abroad, with Chancellor Angela Merkel of Germany and President Francois Hollande of France dominating the affairs of a state once dominated by the English, is heightened just as the British are talking about a referendum to determine whether the kingdom should abandon the European Union. Boris Johnson, the mayor of London, seeks a referendum early next year. The men of British business, big and little, are particularly nervous and want to know when, and soon.

It particularly pains the British that the perception grows that their kingdom is something less than even a bit player in the war against "theocratic barbarism" in the Middle East. A withering document by a defense committee of the House of Commons concludes that with the long commitment in Iraq, the military contribution beyond the Kurdish regions added up to only three persons (compared to 400 Australians, 280 Italians and 300 Spanish). Only 6 percent of the air strikes against ISIS are flown by the Royal Air Force.

The Royal Air Force that won the Battle of Britain -- "never have so many owed so much to so few," in Winston Churchill's ringing salute -- contributes but a pittance of its skill and power against ISIS. Eight RAF Tornado jets and a few remote-controlled drones strike an average of less than one target a day. When Iraqi and Kurdish troops are ready to push ISIS out of Iraq, the defense panel recommends that "the UK should be prepared to provide an increased level of support to those operations from the air." Nobody's taking bets on whether and when.

Adding to the national dismay, the growing anti-Semitism in Europe washes over Britain, too. Incidents of such venomous hate more than doubled last year to 1,168. Ancient hatreds are exploited on social media, with hashtags such as "Hitler Was Right," and "genocide." David Cameron says anti-Semitism goes "right to the heart of what we stand for as a country."

The culture seems out of whack, too. At a strange exhibit at the Victoria and Albert Museum, that genteel museum of sculpture, paintings, tiles and carpets from all over the world, I wandered into a show called "Disobedient Objects," artifacts created to protest apparently everything. An enormous poster of a naked woman wearing a gorilla mask satirizes the famous nude by Ingres, the 19th-century French neo-classical artist. A group of feminists called "Guerilla Girls" are angry because there aren't enough women artists in America museums, and pose the question: "Do Women Have to Be Naked to Get in the Met. Museum?" Victoria and Albert are spinning. But a display of wedding dresses through the ages, just down the corridor, is much better attended. There's hope yet.

In further search of Britain's fragmented sense of itself, the Hayward Gallery invited seven artists to consider "History is Now," looking to encapsulate artistic perceptions of England's current national identity. Several exhibits focus on poverty in the post-Industrial north or extensive coverage of the breakout in the '80s and '90s of "mad cow disease," leaving one reviewer "bewildered, bamboozled and exhausted." No wonder the cows went mad.

The good news is that Old Blighty is alive if bewildered, the Bard's "blessed plot, this earth, this realm, this England." Troubled, but still here.