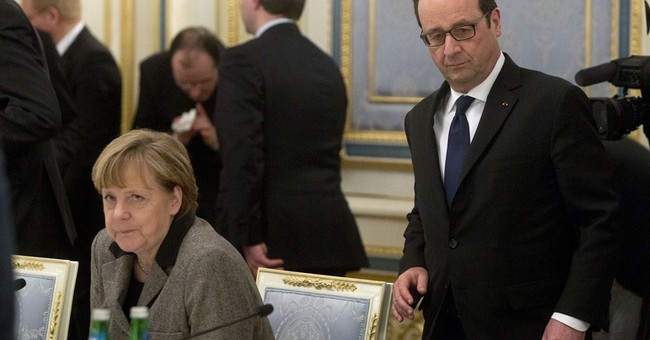 From the sound of media rhetoric you might think Nazi soldiers in polished jackboots are still in pursuit of the Greek resistance. New nightmares over Greek debt revive memories of a nasty time. Observes London's New Statesman magazine: "European Union officials in Greece are likened to the Gestapo."

Germany's economic recovery and its acknowledgment of the sins of the Holocaust had given the world a new view of Germany. But many Greeks are looking backward. Even the new prime minister, though only 40, has a memory older than his years. His first act as prime minister was to visit a World War II memorial to 200 Greek resistance fighters who were slain by the Nazis in 1944. The Germans noticed.

Both sides see each other as stereotypes. The Germans see the Greeks as pleasure-seeking spendthrifts looking for handouts, evading taxes and sipping ouzo in the sun, trying to figure out an early retirement on a fat pension. The Greeks see the Germans as hard-working high-tech workaholics doomed to a grind under a cold gray northern sky. Bild, Germany's largest newspaper, asked after the Greek election how many more billions the election of Alexis Tsipras would cost the German taxpayer: Who is going to pay for the raised minimum wage, food stamps, renewed union demands, and the rehiring of all those laid-off government employees? Good questions all for all of Europe.

Contrasting lifestyles of Germans and Greeks inevitably feed caricature. Germans have suggested only half in jest, that Greece sell its ancient treasures of marble and bronze and peddle their "worry beads" to tourists, since the Greeks don't seem to worry, anyway.

Despite the reputation as a strict disciplinarian and scold that she sometimes uses to good effect, Angela Merkel dismisses the stereotypes. "Often, so-called austerity is pitted against the model of growth and investment," she told the World Economic Forum in Davos. She calls cost-saving measures "structural reforms," and that means no more cash to a debtor nation without imposing harsh constraints. Athens has been forgiven billions of euros by private creditors already, and she says no more.

Mr. Tsipras knows that three-quarters of the Greeks say they want to keep the euro; it's a matter of pride and national identity. If his emotional appeals have often gone over the top, he has nevertheless softened his hostile rhetoric from two years ago when he wanted to disregard any responsibility at all for Greek debt.

Many Europeans seem to be worried less about the collapse of the euro, which they don't expect to happen, than about the rise of political parties on the extreme fringes of both right and left. Unemployment among Greeks between 15 and 25 is measured at an astonishing 51 percent, and anger about unemployment is contagious.

Mr. Tspiras chose the right-wing populist Independent Greeks as a partner in his ruling coalition, whose leader rants against the European Union as "the Fourth Reich" and describes Germany as an "occupying country."

The new prime minister's most appealing constituency may be the regiment of cleaning ladies who have lived in tents at the economics ministry for the past 16 months, giving journalists moving accounts of losing their jobs cleaning government buildings to illegal immigrants willing to work for a euro an hour. Armed with rubber gloves and buckets, brooms and mops on their shoulders, they're heading back to work now to cheers of bystanders. They'll have an easier time with the accumulated grime than Frau Merkel and Mr. Tsipras are likely to have resolving their differences. The fringe parties are watching.