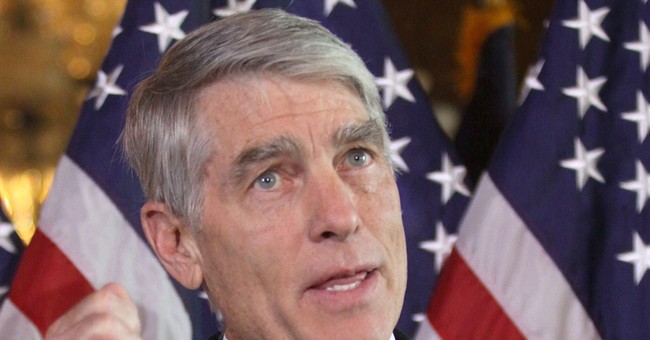 Trending
The Democratic "war on women" has fallen into a time warp, and it's losing traction. Women don't want to be reduced to voting for someone eager to pay for their birth control. Talk about stereotypes. Nor are many women attracted to a senator who couldn't stay on a horse pretending to be Sir Galahad.

Sen. Mark Udall, the Democratic incumbent in Colorado, is mocked as "Mark Uterus," talking only about "women's issues." To the frustration and impatience of fellow Democrats, he's spending much of his television budget on abortion ads. Social issues are important to women, but this year they, like men, have more important things to worry about. In a scary world the gender gaps are volatile. As Casey Stengel said, you could look it up.

In 2000, Democratic candidates held a 9-point edge over Republicans, but two years later the edge was gone. Nobody has to look up what happened that year, because everybody remembers exactly where he or she was on a peaceful September morning when terrorists set the television screen ablaze with fire and fear. Democratic candidates lost big among both women and men in the wake of Sept. 11, but women, according to Gallup, were more afraid than men, and the fire and fear were measured at the ballot box. Today 52 percent of women tell NBC/Wall Street Journal pollsters they're more afraid now than they were then.

The graphic brutality of the ISIS beheadings deepen the perception of the evil nature of an enemy spreading anger and fear across the homeland. Republicans are trusted more to keep the nation safe. The security moms are listening.

With 7 of 10 Americans persuaded that ISIS agents are here and capable of inflicting terrorism in the homeland, women see the threat as a family issue. By 18 points more than men in a CNN poll, women say they're worried that someone in their families will be a victim of a terrorist. In a PEW Research Center survey, women say terrorism is "very important" to their vote -- by 6 percent more than men.

Anecdotes illustrate the point. In monthly focus groups of "Walmart Moms" -- women with children at home who shop at Wal-Mart -- they tell of heightened fear that President Obama can't keep them safe. The panels are split between Romney and Obama voters. This year global pessimism and fears that nobody is in charge of the world trumps economic anxiety. It's the world, stupid.

The "security moms" may be the key to winning crucial Senate elections on foreign policy. The commander in chief is not on the ballot in just less than three weeks time, but he said with emphasis that his policies, "every single one of them," are. His shadow across his party's candidates lengthened, to the delight of Republicans and the astonishment of the wise men of his own party. He might be the difference in several tight races.

In New Hampshire, Jeanne Shaheen, the Democratic incumbent, holds a large lead among women. But Scott Brown, the Republican challenger, is chipping away at that advantage among women, appealing to their doubts about the president. "Radical terrorists are threatening to cause the collapse of our country," he says over and over in ads and on the stump. "President Obama and Sen. Shaheen seem confused about the nature of this threat. Not me."

In Colorado, where Sen. Udall's grasp of the majority of the women's vote is slipping despite his emphasis on women's issues, the National Republican Senatorial Committee is running an ad drawing attention to his statement that the Islamic State "does not present an imminent threat." As ISS fighters stalk across the television screen, a woman narrator asks: "Can we take that chance?"

Rep. Tom Cotton, the Republican challenger against Sen. Mark Pryor in Arkansas, earlier angered some women when he voted not to renew the reauthorization of the Violence Against Women Act because it was "too broad." They responded earlier to Mr. Pryor's accusation that Mr. Cotton had voted against protecting women and children. But suddenly that's a hard sell against a man who fought in both Afghanistan and Iraq and brought home a Bronze Star for heroism and calls national security his "No. 1 priority." Polls show Mr. Cotton increasing his small lead.

Suddenly the Democratic "war against women" begins to sound like stale and unconvincing rhetoric. With a real war in the Middle East, there's the prospect of a different kind of showdown at Gender Gap.