'Death Be Not Proud' 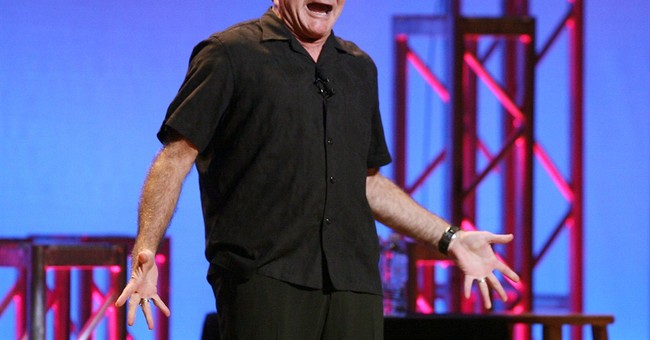 Robin Williams and Lauren Bacall join this year's roster of celebrity deaths. Their names and fame preoccupy us in public mourning, though most of us were no closer to them in life than to a movie or television screen. Mourning differs in different times, but how we experience the tears and the reminiscences tells us a lot about ourselves.

Discussions about these stars continue in the public prints because both touched us with their talent. We were their audience in the darkness of the movie theater or before a smaller screen, sitting next to friends and family, mixing up our reactions together. We shared a human commonality, if not shared beliefs.

The death of famous performers offers the secular a sense of immortality. We watch them in their changing identities through an invisible wall, knowing that images transcend the real identities that play on forever in ways that reality cannot. Art and entertainment structure sadness for the unbeliever in a way that religion does for the faithful, bonding us one to the other while avoiding the details of politics and culture.

Aristotle observed that emotions of pity and fear emerge from tragedy, but he didn't tell us how the mysteries of love spring from a fine romance or the way tears through laughter, the gift of comic genius, can purge pain from the soul. There's more than enough vulgar and stupid grandstanding to go around in the public mourning of movie stars, but the dead stars did make us feel more alive in the moment.

When a passion explodes on the big screen, as it did between Bogart and Bacall in "To Have and Have Not," we are reminded of the possible in an electric connection that only romance between a man and a woman can. We watch Humphrey Bogart, with his understated virility from a more confident age, become bewitched, bothered and bewildered by a slim and fetching woman who plays out her sexual power with wit and style. Such smoldering romance is a refreshing antidote to the overripe explicitness in current movies, which dull the senses and crush romance.

The Robin Williams was a different kind of talent, a gift from a uniquely funny man who gave us belly laughs with his manic extravagance. We cringed when his out-of-control brain occasionally veered into darker matter. Like his comedy, some of the talk about his death went too far, like the silly debate over whether his politics contributed to his suicide. But respect for his talent was genuine, appreciated for his razzle-dazzle.

Ours is not an era of the classical elegy, of lyrical lamentation for a public figure. We can't weep for Adonais as Shelley did for Keats, or affirm death as a connection to the natural world as Tennyson did for his friend in "In Memoriam." (We're more likely to turn such sentiments into an environmental impact statement.) It's hard to find consolation in poetry that traditionally harnesses grief because fewer people are linked by religious beliefs held in common. Poetry is not a popular art form.

One of the most powerful sonnets about death was written in the 17th century by John Donne, who demanded that "death be not proud." He was armed with faith, as a minister of the Church of England.

Death is the narrator of "The Book Thief," a popular current novel and movie enjoyed by children and adults alike, but the man with the scythe inevitably claims each victim for himself, often as a consequence of war.

The most celebrated elegy aligned with contemporary sensibility was written by Matthew Arnold, the 19th-century poet, who saw the sea of faith ebbing away in a "melancholy, long withdrawing roar." The poet listened to the sounds of death as "ignorant armies clash by night," and urges us with a personal note to be true to one another when we love.

Celebrity death in the age of the Internet can trump the tabloids as the purveyor of bad taste, but like it or not, they're one of the ways we try to tame the universal fear of death. With Lauren Bacall, the natural aging process seemed to be in place for a woman who dies at 89. Robin Williams cut himself off abruptly at 63.

We might join the poet to simply give thanks for the special moments when the sea is calm and the moon lies fair in the embrace of the night, and remember that Everyman, no matter how hard he tries, cannot escape the appointment in Samarra.