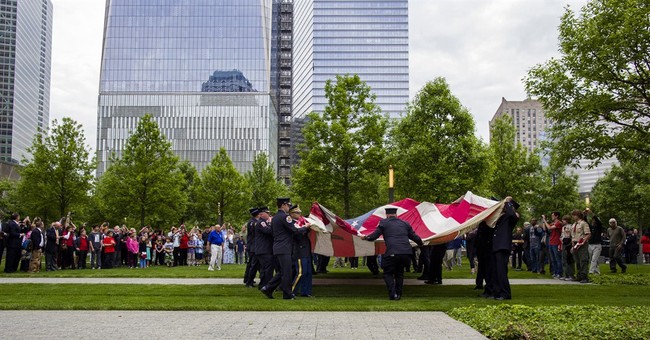 Trending
New York -- New York, New York, a wonderful town. (The Bronx is up, and the Battery's down.)

Sometimes derided in what New Yorkers call "flyover country," Gotham is nevertheless a microcosm of America with its many immigrant and ethnic cultures, the work of immigrants who first clung together in self-made ghettos with shops, stores and restaurants to recall the places left behind. When these immigrants make enough money, they usually move out to more inclusive neighborhoods.

New York was built by legal immigrants. At Ellis Island, where more than 12 million immigrants made their first stop in America between 1892 and 1954, a tour guide tells the story -- perhaps apocryphal, but it could be true -- about an arriving immigrant who wore a signboard because he spoke no English, saying he wanted to go to Houston, meaning the street on the Lower East Side, then a Jewish neighborhood. He was by mistake put on a train to Houston, Texas -- where he settled and struck oil.

These were the days and years of happier immigration. There was no chaos on the border, few questions about who was legal and who was not. It was difficult for those immigrants to get here and difficult to go back. Everyone came to stay, climb into the melting pot and become an American. New York is a city in constant change, swinging between the pride of e pluribus unum -- "out of many, one" -- and the discomfort that accompanies multicultural and economic differences. The roiling debate over illegal immigration sometimes leads us to forget that we are all immigrants. Ronald Reagan once remarked that America is the only country in the world where a new citizen is as American as a citizen descended from a forebear who arrived two or three centuries ago.

But New York is also different from the rest of America, with its sophisticated culture in avant-garde art galleries, museums, expensive couturiers, gourmet restaurants and an abundance of upscale organic, vegan and gluten-free markets to suit the precious and the trendy. On the upper reaches of income, the 1-percenters are status-conscious, acquisitive consumers who can afford almost any luxury the city offers.

New York is the melting pot that never quite melts, with some of the poorest driven by hope of "moving on up," to achieve and become rich in the way of the millions who did it before, and with a shrinking middle class of young people moving away when they want to start families because they can't afford Manhattan rents.

What draws New Yorkers together today is the memory of Sept. 11, 2001, and the rebuilt ground zero. The new National September 11 Memorial Museum has opened next to the Freedom Tower, rising from the ashes like the mythical Phoenix, testifying to the defiance of an obscene Islamist attempt to humble and humiliate.

The sacred and the secular are mixed at the museum at ground zero, documenting both what was lost and the spirit of what survives. The lost get personalities in portraits with touching detail that rises above grim statistics. Cherished artifacts, a pair of shoes, a pair of eyeglasses, a fireman's helmet, a medal, bring life to democracy's Valley of the Kings. Grief remains palpable in the descent into dark reflection, a pilgrimage warmed by hope of never again. A dramatic abstract sculpture created by the force of impact when one of the airplanes crashed into the North Tower between floors 93 and 99, agitates the imagination with pity and fear, steel twisted in agony and loss.

The slurry wall, 64 feet of poured concrete that kept out the Hudson River, survives, a monolith preserved as though an archaeological remnant of an ancient civilization. It's a triumph of engineering, an emblem of the human spirit, cracked but unbowed. A surveillance video showing the hijackers going through airport security on the fateful morning unsettles but demands attention. Some critics have railed against the use of the word "jihad" in the museum's narrative about 9/11, but the word is both reminder and touchstone for diligence in the continuing pursuit of evil men who are determined to kill us.

This week, U.S. Attorney General Eric Holder warned that Islamist fighters from Europe and the United States who went to fight in Syria have learned new technology from bomb-makers in Yemen, and some have been sent home with an assignment to do harm.

The Memorial Museum reminds New Yorkers and the rest of us to love thy neighbor, but beware of thy enemies. Two granite basins of rippling water fill the footprints of the destroyed twin towers, tears of grief and mourning -- and of renewal and the will to fight back.