Roman Reflections on Tragedy and Triumph 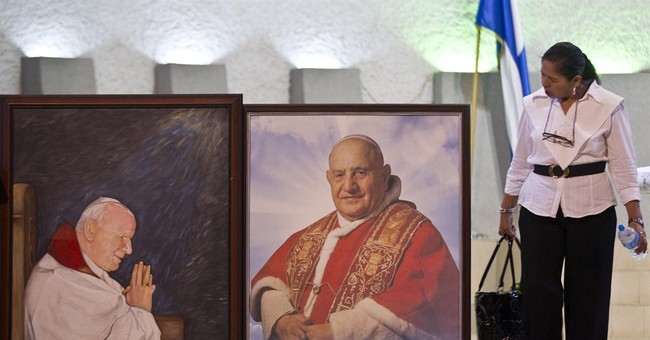 ROME -- Rome is "the eternal city," and it's eternally an inspiration, particularly this year during Holy Week and the run-up to the canonization of not one but two new Roman Catholic saints, both of them popes.

The Romans are the blithe spirits, noted for mixing up the secular and spiritual in their appreciation of faith and life. There's always an awareness of pagan exuberance flowing through its contemporary Christian culture.

A taxi driver, eager to impress an American visitor with his proficiency in English and a knowledge of her pop culture, launches into a description of a famous scene in the 1953 movie "Roman Holiday," a tale of a princess stealing away from the palace and falling in love with an American newspaper reporter. The reporter takes her to visit the "Mouth of Truth,'' an ancient monster's face carved into marble and said to bite off the hands of liars. The reporter (Gregory Peck) terrifies the princess (Audrey Hepburn) by putting his hand in the monster's mouth, telling a lie and appearing to withdraw only a stump. The princess screams until the reporter pulls his hand out of his sleeve. Blithe spirits, indeed.

But the glory of Rome is real, with no gags. Among the treasures are the glorious Renaissance paintings by Caravaggio, painted to attract Catholics back to the Roman church after the Reformation. These are religious dramas, drawn from models who were earthy street people with dirty feet and more dirt under their fingernails. These paintings were scandalous in their time, denounced by high clerics, and now exhibited with honor in museums and chapels. The modern Roman church prides itself on a talent for self-correction.

A Jew in Rome during this particular Holy Week, visiting the site of the ghetto where her ancestors were locked in at night and who grew up on the works of art and literature accusing the ancient Jews of baking the blood of Christian babies in mazoh, finds changed attitudes, wrought by the courage of the two new saints. Both pontiffs challenged the waves of history that encouraged anti-Semitism in the church from the Middle Ages through the years of the Holocaust.

John XXIII took on the array of thinkers and writers whose stereotypes began in folklore and thrived in the faith of many Christians. John became the "rule-breaker pope," and the breakage was considerable, from opposing the ridiculous to elevating the sublime.

He not only ended the use of "perfidious" as the accepted adjective for Jews in Catholic prayers but saved Jews from Nazi murderers when he was papal nuncio in Turkey and Greece. He helped tens of thousands flee Eastern Europe with forged birth certificates and arranged exit visas. After World War II, he refused to obey orders in France not to return Jewish children, who had been baptized, to their surviving parents.

Many are familiar with the document he begot called the "Nostra Aetate," but fewer know it as the "Magna Carta" of Catholic-Jewish relations, or are aware of the behind-the-scenes negotiations at the Second Vatican Council that were known as the "perils of Pauline." It was difficult for some at the council to give up the idea that "the Jews killed Christ," and unthinkable for many to accept the idea that Jews were acceptable in the sight of God. Hadn't the New Covenant mediated by Jesus superseded the Old Covenant between God and the Jews? The argument was so charged that a threat to blow up St. Peter's had to be taken seriously. (The threat turned out to be a hoax.)

Pope John Paul, born in a town near Krakow with a large Jewish population, knew his Jewish neighbors as friends. He was the first pope to visit both Auschwitz and the Great Synagogue in Rome. This fit with his expressed belief that Jews were his "elder brothers" in the faith. He further underlined penance at the Western Wall in Jerusalem where he expressed deep sorrow for the persecution of the Jews by sons and daughters of his church. Together the saintly duo was a one-two punch against anti-Semitism. In a recent survey of rising worldwide expressions of anti-Semitism, the old anti-Semitism of Christians was the least cited.

At the Vatican Museum, a painting by Alice Cahana, a Jewish survivor of Auschwitz who lives now in Houston, hangs on the wall at the end of the 20th century exhibition. Titled "No Names," it's a dark nightmarish vision of a railroad track with tattooed numbers floating above it. "No Names" is the last painting a visitor sees before entering the Sistine Chapel, with Michelangelo's gorgeous fresco of "God Giving Life to Man." Hope trumps tragedy.