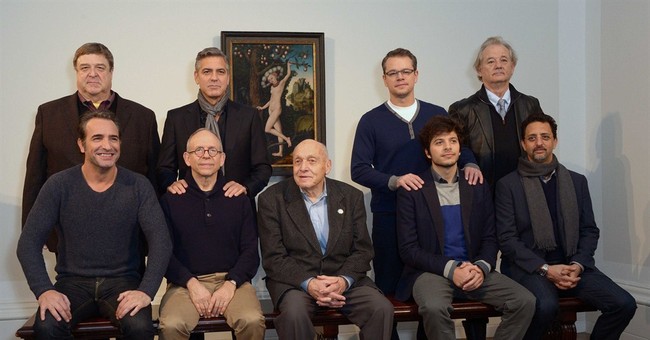 The National Gallery of Art stands between the White House and the Capitol, bracketed by other museums exhibiting treasures ranging from the red shoes Judy Garland wore in the movie "The Wizard of Oz," to the Apollo 11 space module that went to the moon and back, to a Leonardo da Vinci portrait reckoned as his best work short of the Mona Lisa.

Thanks to George Clooney, those who care about art and creative human adventures beyond the gritty give-and-take of politics are getting a little attention in Washington. The National Gallery recently showed a preview of "Monuments Men," which Clooney directed and stars in (now playing at a theater near you), telling the story of men and women who worked at considerable risk to life and limb to save art and architecture that might have been destroyed by the bombs and guns of World War II, or the collateral looting of thieves and vandals.

Against the noise of the bickering and infighting between the White House and Congress, it's a welcome relief to reflect on such things as art that testifies to a different kind of human spirit. Very few schools today acquaint children with the treasures of art or cultural artifacts. Learning is dumbed down to emphasize identity and diversity with little appreciation of what we hold in common. Many of our school children study the Harlem Renaissance and learn little of the "other" Renaissance. Education is no longer anchored in the art of the West, which after all is the work of dead white men.

"Monuments Men" is about the value of fine art that stands for Western values over the test of time, and it's particularly heartening for coming out of Hollywood. It's about how American and European art scholars and curators saved cultural artifacts threatened by Nazi thieves and the collateral damage of war. It tells the story that followed the order given by Gen. Dwight D. Eisenhower, the supreme commander of the Allied Expeditionary Forces, on the eve of the invasion of France to preserve the Western heritage. Knowing that his soldiers would come into contact with monuments, museums and galleries, "which symbolize to all the world all that we are fighting to preserve," he told every commander to protect them whenever possible. It was an unusual order in the time of battle.

The movie takes liberties and poetic license with nonessential facts and creates a fictional flirtation between a woman (Cate Blanchett), who works at the Jeu de Paume in Paris, and a medieval art scholar (Matt Damon) who would become director of the Metropolitan Museum of Art in New York. But the heroism of the academicians, historians and curators is real. They were knowledgeable men and women willing to risk their lives to save the common heritage.

The Nazis, in their vicious greed, looted some of the world's greatest works of art, confiscating them from Jews and declaring them "ownerless." Despite his anti-Semitism, Hermann Goring understood the value of Jewish taste in painting and sculpture and he stole enough art to fill eight rail cars. Hitler, the failed art student, revealed his ignorance of modern art, which he called "degenerate," and sold or burned many paintings by Picasso, Salvador Dali and German expressionists.

The monuments men recovered millions of pieces, including works by Michelangelo, Rembrandt and da Vinci, taken from churches, museums and private owners. The Nazis had hidden them in caves, mines and castles for the future Fuhrermuseum. After the war, the art was returned to rightful owners whenever possible. Germany continues to return art to families who were dispossessed of it, but they're lagging with the recent treasures found in the vast collection of Cornelius Gurlitt, the son of a Nazi art dealer.

Less well-known is that the preservation of art by the United States continues in war zones today. After looters broke into the National Museum of Iraq in Baghdad in the shock and awe of the allied invasion in 2003, the U.S. military set out to recover stolen pieces, and a team of experts rescued thousands of books and documents of Iraq's ancient Jewish community found in Saddam Hussein's basement. Laura Rush, an archeologist hired by the Army, arranged for more than 40,000 packs of playing cards illustrated with historic ruins in Iraq and Afghanistan to be distributed to American soldiers. Since the GIs spent so much downtime handling the playing cards, she told The Wall Street Journal, "they served as the ideal teaching tool."

It's important to foster an appreciation of art and the history of art in the schools, instead of waiting for experts in time of war to enlighten soldiers in their barracks. Isn't that worth doing?