No Requiem for a Twitching Corpse 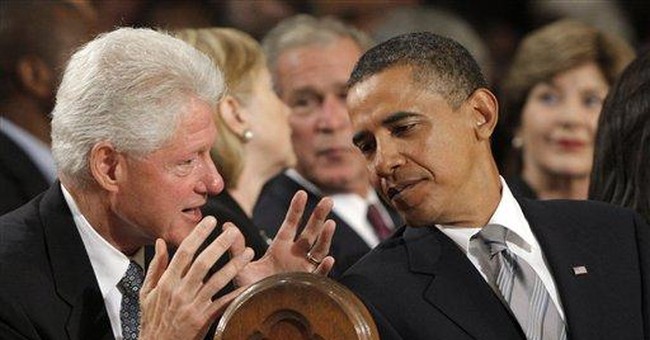 All but hidden in the fulsome eulogies for Ted Kennedy lurk a few serious ideas worthy of more than romancing history or waxing sentimental over a death in a famous family. These ideas are about the very nature of liberalism and conservatism, the connections between personal virtue and public morality, and how emotion shapes ideology.

The passing of "the last liberal lion" comes amidst a national debate over health care "reform" that grows fiercer by the day. President Obama, who has tried to stand above the messy details of whatever emerges from Congress -- tacking first left, then right, then left again -- is about to tack this time into the fray. But there's scant room left above the fray. Two books, one a reissue of a minor classic, illustrate how and why. The president, like the rest of us, could usefully make room on his bedside table for both of them.

Sam Tanenhaus, editor of The New York Times Book Review, set out six months ago to pronounce a requiem for conservatives, and given the events of the summer he probably wishes he had waited awhile to publish "The Death of Conservatism." This grew from an essay in The New Republic, and his rush to a soliloquy recalls Mark Twain's famous remark that reports of his death were "an exaggeration." He serves up a few raw vegetables (mostly turnips), if not red meat.

"The Liberal Imagination" by Lionel Trilling is reissued a half century after original publication and asks again for a re-examination of private motives behind public power, an exercise that Washington takes only reluctantly. Trilling's book raises ethical considerations to mull when political idealism camouflages private sins. Trilling as literary critic asks the ever-relevant question: "What might lie behind our good impulses?" Like Tanenhaus, he looks to Edmund Burke, who understood how "light and reason" and the noblest ideas behind the French Revolution ran into a dead end of barbarism. Public morality couldn't accommodate the complexity of human differences.

Events of the summer demonstrate that Tanenhaus is no clairvoyant. He describes conservatives as "the exhumed figures of Pompeii, trapped in postures of frozen flight, clenched in the rigor mortis of a defunct ideology." The absurdity of the image is undercut by his point of view. He regards Bill Clinton and Barack Obama as "model contemporary presidents," comparing them to Edmund Burke in their talent for adjusting their ambitions to the realities of the moment.

Tanenhaus sees only two kinds of conservatives, good ones in the tradition of Burke, who today would be classic liberals, and bad ones like Bill O'Reilly and Rush Limbaugh. The modern bad conservatives resemble Madame LaFarges with knitting needles to destroy the nation stitch-by-stitch, snuffing out the last remnant of benign humanity.

He calls them "insurrectionists" and "radicals," blind to the reality that he is describing many on the left. His description of Joe McCarthy as the father of contemporary conservative insurgency is the simplistic analysis beloved by ideologues of the left. This analysis ignores the shrill gasps of outrage and name-calling in Obama's base, recalling the lava-encrusted dog at Pompeii, frozen in ash struggling against the leash that denied escape from doom.

Like his liberal cohort, Tanenhaus imagines the examination of the conservative movement as an "autopsy," but the corpse begins to twitch as plummeting public-opinion polls signal a new reality as we move beyond Labor Day. Nevertheless, the "autopsy" is useful for examining flaws and weaknesses on the right, suggesting a need for a fresh vocabulary. And that's the prescription in Trilling's book, whose literary analysis of politics is a corrective for the arguments of knee-jerk liberals.

Trilling worried as early as the 1950s about the complacency of liberalism, urging liberals to read imaginative conservative writers if only to sharpen wits and clarify reasoning. Nothing refreshes the mind of an ideologue like the cogent argument of a skillful opponent. He understood that liberal goals, no matter how "righteous," could be corrupted in the journey to attain them.

This is the useful lesson for conservatives who cling stubbornly to rigidly traditional values when there are badly broken families to mend. Just as undisciplined capitalism can give way to undisciplined greed, uncompassionate conservatism can be stingy in taking care of the most needy.

"Now and then," writes Trilling, "it is possible to observe the moral life in process of revising itself." This could be one of those times.