A Forked Tongue Over Gaza 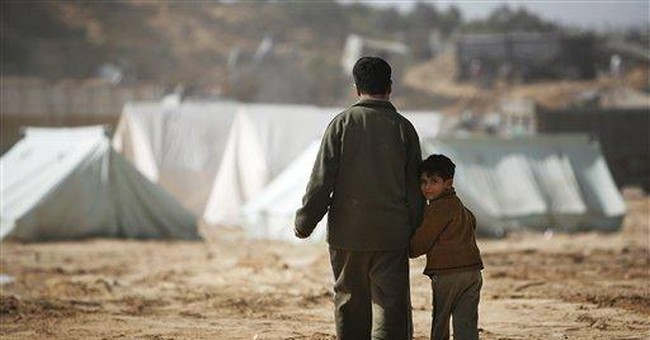 Der Spiegel, the German newsweekly, came up with the most telling headline on the war in Gaza, its interpretation of the voice of Hamas: "Hurray! We Lost!" This interpretation took a cue from the soccer coach who was fond of telling his team about to play a weak opponent, "They cannot win against us, but we can lose against them."

That's what Israel discovered for itself when its soldiers went into Gaza to answer the Hamas rockets. The Israelis killed 1,300 Palestinians, including a number of high-ranking Palestinian officials, wounded several thousand more and destroyed much of the Hamas military infrastructure, all in just three weeks. They were nevertheless told they had lost.

After Israel announced a cease-fire, Ismail Haniya, the "prime minister of Gaza," came out of hiding and declared victory. Such chutzpah, observes der Speigel, could only be compared to the Black Knight in a Monty Python movie: "After King Arthur cuts off both of the knight's arms and legs, he tells him, 'All right, we'll call it a draw.'"

What happened in Gaza is tragic, but the satirical comparison is not far-fetched. Hamas is winning world public opinion for a seat at the negotiating table as the hue and cry against Israel's "disproportionality" continues to dominate the international media. The moral balance weighs on behalf of Hamas despite its cowardly decision to place rocket launchers and armaments in mosques, schools and hospitals.

Talk about "eyeless in Gaza" (with apologies to Aldous Huxley). In the Middle East, it's the blind who think they see most clearly. The Europeans, terrified into paralysis by the Muslims in their midst, echo Arab claims. Protesting crowds in Paris, Berlin and London blame the Jews and elevate Hamas to heroic status merely for surviving Israel's onslaught in Gaza.

"Hamas has survived the war," observes Frankfurter Allgemeine Zeitung, the German newspaper. "It exists, and it is here to stay. Therefore, it is essential that an easing of the Western boycott against the Islamists is considered."

By this logic, the Palestinians might deserve a seat on the United Nations Security Council as soon as they lose a few more wars. Humanitarian help for wounded civilians is the honorable thing to do, but anything more is perverse. The cease-fire was quickly broken by Hamas.

Not everyone in Gaza sees "survival" as euphemism for victory. Gaza builder Mohammed Sadalah, whose house was appropriated by Hamas to use as an emplacement for guns to shoot at Israelis, spoke to reporters as he stood in the ruins of what used to be his bedroom. Hamas came to power by handing out groceries with a message of change, an antidote to the corruption of Fatah, but Mohammed Sadalah is not persuaded. He points to the destruction of his village: "That is the change that they brought about. We were blasted back 2,000 years."

Some former Hamas supporters like Sadalah think Hamas is likely now to follow the example of Hezbollah, which like Hamas claimed dubious victory against Israel in 2006. But Hezbollah gave no help to Hamas for fear of Israeli retaliation. It understands how bad that bad can be. When rockets were fired at Israel from Lebanon, the Lebanese prime minister lost no time in condemning them.

On Jan. 27, many people interrupted their daily routine to recognize Holocaust Memorial Day, an observance marked this year against the marches of those who wish Israel and the Jews only ill. Jewish-owned shops across Europe were sprayed with insulting graffiti, and marchers shouted insults reprised from the Nazi days: "Gas the Jews," and, "Get back to the ovens!"

Anti-Semitism always speaks with a forked tongue. Few Europeans decried the excessive force of Hamas as it fired more than 6,000 rockets since 2005 at Israel, killing and wounding civilians, and turning every night into a fearful nightmare. Where was the appreciation of the skill of Israeli pilots who carefully calibrated targets in neighborhoods where Hamas hid weapons and supplies, dropping leaflets warning Palestinians to get out of the neighborhood?

Remembering Jews killed in the Holocaust is important, but memory must recognize the perpetrators of violence as well as change attitudes. As long as a double standard exists toward Jews, memorializing the Holocaust becomes empty sentiment and "never again" a vacant promise.

"There are a great many people in the world," writes Rabbi Marvin Hier, founder of the Simon Wiesenthal Center and the Museum of Tolerance in Los Angeles, in The Wall Street Journal, "who even after Auschwitz just can't bear the Jewish state having the same rights they so readily grant to other nations."

That's the real disproportionality. This is the message for George Mitchell, the new presidential envoy to the Middle East, to keep firmly in mind as he attempts to "process" peace.