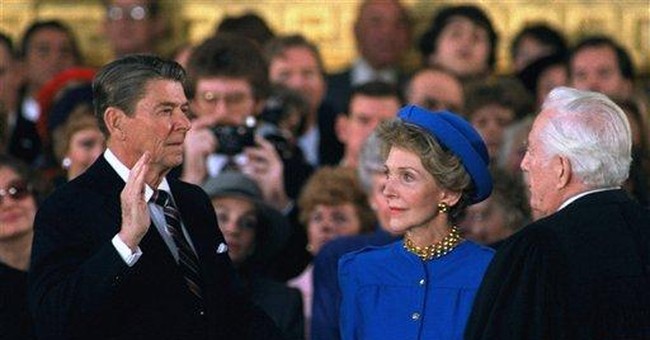 An inauguration is democracy's version of a coronation. It's democracy that makes the difference. The president wears no crown, carries no scepter, walks unanointed by God. He wears a simple suit, sometimes with an expensive label, but nothing in satin or silk. He takes the oath of office for a mere four years armed only with an understandable hope of doing it again four years hence. In the words of Dwight D. Eisenhower at his inauguration, "The people elect leaders not to rule, but to serve."

Once the president is sworn in, he makes a speech articulating his hopes and dreams for the people who elected him, sometimes telling the rest of the world what they can expect from him, too.

"Ask not what your country can do for you," John F. Kennedy famously said in his inaugural address in 1961, "ask what you can do for your country." What followed is often lost in memory, but no less important, addressed to his fellow citizens of the world: "Ask not what America will do for you, but what together we can do for the freedom of man." The Europeans could usefully hear that again.

I spent the season between November and January reading inaugural addresses. They not only reflect the man himself, but the history of the moment. Some soar with poetic cadences, others are blunt and workmanlike, still others puffed up as with wind. No doubt Barack Obama has read much of that rhetoric as he crafts (with the assistance of a helpful ghost) the words he will speak next Tuesday. But behind each speech is yet another creator, who George Washington called "the Great Author of every public and private good," who conducts the affairs of men with "an Invisible Hand."

We firmly separate the established church and the state, but presidents who swear to uphold the Constitution nearly always call on heavenly intercession. Thomas Jefferson, who was attacked as an infidel and a disciple of Voltaire, a man who would cast Bibles into bonfires, reflected at his second inaugural on his reliance on God, suggesting that America was the new Promised Land: "I shall need, too, the favor of that Being in whose hands we are, who led our fathers, as Israel of old, from their native land and planted them in a country flowing with all the necessaries and comforts of life."

Even presidents characterized by reserve can recover their voices at their inauguration. Calvin Coolidge was known as "Silent Cal," stoic and grave. Once, when a dinner companion said she had made a bet that she could make him say more than two words, he replied: "You lose." But he rose to the inaugural occasion in a speech of 4,078 words.

Such numbers nevertheless pale in length to the longest speech (so far), given by William Henry Harrison, the hapless and hatless president who succumbed to pneumonia after delivering, bareheaded in a snowstorm, an inaugural address lasting nearly two hours. He gave the longest speech but served the shortest term as president. He died 31 days later.

The best inaugural addresses are inspirational, appealing to what Abraham Lincoln called "the better angels of our nature." They speak to our commonality, to what we cherish in our government, the triumphant reminders of who we are and how far we have come. "The American sound," Ronald Reagan called it. "It is hopeful, big-hearted, idealistic, daring, decent and fair." Like Walt Whitman, the Gipper heard America singing.

But these are not upbeat times. Today, the music is muted if not discordant, as we confront our economic woes. We're in a recession, not a Depression, but the recollection of the soothing voice of Franklin Roosevelt reminds us that "the only thing we have to fear is fear itself." The radio on that chilly March day in 1933 -- the inauguration was moved forward to January in 1937 -- resonated with the power of reassuring warmth only later recognized as illusionary. He prescribed discipline and direction to tackle the problems facing the nation. Alas, it finally took a war to do that.

Barack Obama has hard work ahead. He has earned his reputation as a wordsmith, and he's immodest in his aspirations to make Lincoln his model. He would have to do better than anyone else to approach Lincoln's poetic call for unity even before the Civil War, evoking "the mystic chords of memory, stretching from every battlefield and patriot grave to every living heart and hearthstone, all over this broad land."

On Tuesday, we'll all be paying close attention to the new president. It's a day you might say we're all Obamaniacs. We'll be all ears.