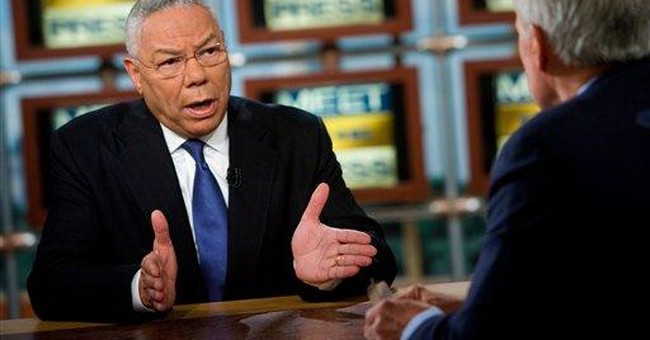 Not so long ago when you wanted to make a personal endorsement of a candidate for office, even for president of the United States, the ritual was simple. You stuck a sticker on the back bumper of the family car or put up a cardboard sign in the front yard.

But that's not enough if you're a big-enough shot to get a little ink in the morning paper for your solemn announcement, or a mention on a cable-TV shout show. If you're Colin Powell, a distinguished former secretary of state, you might even get to Page One and make a splash on the Drudge Report. A former secretary of state's endorsement might actually be of interest to someone besides the endorser's wife and kids. If not the kids, at least the spouse.

Eric Schmidt, the chief executive officer of Google, even got a mention in The Wall Street Journal for his "plans to endorse." Sometimes an endorser just sends out a press release -- an e-mail is cheap enough -- and hopes somebody in a newsroom somewhere bites. "Vanity, thy name only used to be woman," to further mangle the oft-misquoted soliloquy of Hamlet (the feminine weakness was frailty, not vanity). Now it's gender nonspecific.

But all we want from Mr. Schmidt and Google is to settle arguments late at night, such as who was Cary Grant's third wife. (Betsy Drake, the third of five, was the incumbent from 1949 to 1962.) Mr. Schmidt may have good reason for his endorsement, since Google is dealing with the Justice Department over several regulatory issues. Getting on the bus now while seats are still available is only smart business.

Ben Bernanke, the chairman of the Federal Reserve, endorsed the Democratic stimulus program for the economy, and The Wall Street Journal observed that he "apparently wants four more years as Federal Reserve chairman." Women's Wear Daily, which knows everything about fashion, reports that fashion is trending toward Obama.

Even mere scribblers are getting into the personal endorsement business. Ken Adelman, a magazine writer who was an arms control maven in the Reagan administration, sounded more miffed with Sarah Palin than annoyed with John McCain. Or maybe he just wants a seat on the bus (and to keep his name in print).

The bus is already crowded in Europe; the Europeans haven't discovered that the No. 55 bus from Berlin with connections in Paris and London doesn't even stop here. A poll finds that 64 percent of the French are eager for Obama to get to the White House. Only 2 percent want McCain.

Boris Johnson, the new mayor of London, offers an endorsement that merely embarrasses the endorser. He finds many reasons for hoping "Barack Hussein Obama" wins and, curiously, uses the middle name that has become the H-word in polite society here. "He seems highly intelligent," the mayor wrote in an op-ed in the London Daily Telegraph. "He has an air of courtesy and sincerity. Unlike the current occupant of the White House, he has no difficulty in orally extemporizing a series of grammatical sentences, each containing a verb." This was so over the top that Toby Harnden, the Washington correspondent for the Telegraph, felt compelled to apologize for the newspaper.

"What's his argument?" he asked. "Boiled down, Boris thinks that Obama is courteous, intelligent, sincere and speaks well. Oh, yes, and he is black. Shades of Joe Biden's patronizing remark that Obama was 'the first mainstream African-American who is articulate and bright and clean and a nice-looking guy.'"

Speaking of Biden, which almost nobody does, the vintage Joe emerged in Seattle, predicting that Obama will soon tank like Wall Street, but not until after the election: "I promise you, you all are gonna be sitting here a year from now going, 'Oh, my God, why are they there in the polls? Why is the polling so down? Why is this thing so tough? We're gonna have to make some incredibly tough decisions in the first two years. So I'm asking you now, be prepared to stick with us. Remember the faith you had at this point because you're going to have to reinforce us."

When Joe saw a reporter in the back of the ballroom, he paled, stopped talking and beat it. Why couldn't he have settled for a bumper sticker or a sign in the front yard?