America Can Survive an Illegitimate Commander-in-Thief

Susan Stamper Brown
|
Posted: Nov 14, 2020 12:01 AM
Share   Tweet
The opinions expressed by columnists are their own and do not necessarily represent the views of Townhall.com. 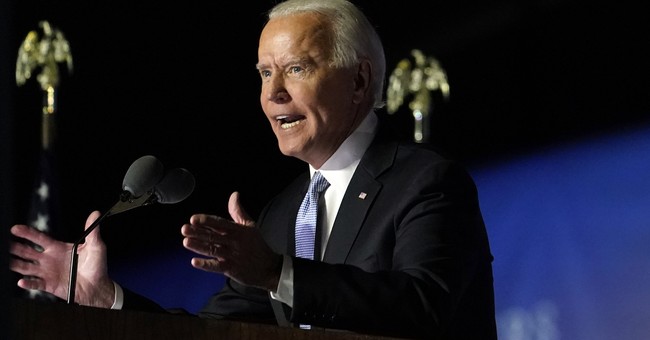 Unless the Supreme Court intervenes to halt what may be the most significant political heist in American history, Democrats are on their way to placing America under the thumb of a communistic regime run by an empty-headed Commander-in-Thief installed as its figurehead.

I understand those are strong words coming from a columnist who is not a conspiracy theorist. Quite the opposite, I’m a realist who doesn’t buy into the claim there is no widespread voter fraud, coming from the folks who wasted the last four years ranting that Russians rigged the 2016 election for Donald Trump without a shred of evidence.

Democrats now tell us to ignore our lying eyes because election fraud does not exist, although mounting eyewitness evidence proves otherwise.

Even without evidence, that half of America believes voter fraud likely influenced the outcome of the 2020 elections is a problem that should horrify anyone with an ounce of common sense (which immediately cancels out most Democrats).

Consequently, from day one, a Joe Biden presidency will be considered illegitimate and illegal by at least half the country. Even still, Demmies (Democrat-commies) don’t care because it’s all about power and advancing a permanent agenda.

Now, more than ever, patriotic, freedom-loving Americans must push back hard against this leftist onslaught.

They must stand up, speak out, shout if necessary—so loud that AOC, the lying, pony-faced commie soldier (as Biden might put it) in the House of Representatives, puts you on her "whose been naughty list."

As dark as it seems today, the America we love will survive — if we seize this moment and resist with all our might.

A few suggestions to resist:

Beat them at their own game — Remember the first commandment of politics: Do unto Democrats as they have done unto us.

Push back — Watch their every move and make them own their mistakes.

Overtake — Work to help Republicans overtake the House of Representatives and grow their numbers in the Senate.

Expose them — Infiltrate every organization they control. Watch, record, dig, investigate, document, and expose their deeds. Make them paranoid.

While you are at it, don’t forget to take the time to take care of you. After all, tired warriors need time for healing too.

If you haven’t already, divorce Fox News (except Tucker) and shut down social media. Take time to close your eyes, inhale, exhale, and take a minute to feel, really feel the warmth of the sunshine on your face. Whisper a prayer. Lord knows America needs it. President Trump needs it. You need it. Fellow warriors in this fight to save America need it.

It’s incredible how a few minutes of downtime can help you focus on things that matter.

Sure, politics matters. Fighting Democrats to the bitter end and the Supreme Court matters. Not giving up until every legal vote is counted and every illegal one gets thrown out matters. Exposing the lying liars in the media who are about as bright as coronavirus toilet lickers matters, and prosecuting every dishonest US Postal Service worker and ballot stealer and cheating poll worker matters.

But at some point, for sanity’s sake and your family’s sake and the country’s sake, you need to step away. Take a break. Shut it all down; it will be here when you return. The war still rages and will continue until that promised day when real justice is served and wrongs are made right.

Meanwhile, (I know I sound like my dad here) rest assured knowing cheaters never really win. Sure, they might get away with stealing an election, but their treachery will come back on them in ways they never imagined. It is inescapable — the Law of the Harvest — we reap what we sow. Always. Maybe not when we think they deserve it, but it will happen, eventually.

As awful as this season is, it is not the end; better days will come. Not perfect days, just better ones. In this incredible gift called life, both good and evil are bundled in the same package. So, be encouraged, even if Biden becomes an illegitimate Commander-in-Thief, down-ballot election results prove Trumpism lives on and runs very, very deep in the veins of patriotic Americans.

If we do these things, America will survive. We have had outstanding presidents like Donald Trump and survived incorrigibly corrupt ones like Barack Obama. We’ve survived terrorist attacks and Deep State domestic attacks to overturn elections. We’ve survived wars and recessions and depressions and pandemics.

And we’ll survive this dark season too. Remember: Darkness always, always, always succumbs to the light. So, keep your sunglasses handy.

This moment is only temporary and will make better sense down the road. It’s all about perspective. As I’ve written before, life is best understood when we view it from the rearview mirror, so let’s give this thing a little time. Then fasten your seatbelt, put on your sunglasses and take a road trip. And please don’t forget to check out the rearview mirror. America will still be there, thanks to you patriots and a whole lot of God’s grace.

©2021 Susan Stamper Brown. Susan is an award-winning columnist who lives in Alaska. She feels safer around the grizzlies which roam her property than the leftists roaming worldwide. She has written for scores of newspapers and media publications across the U.S., including USA Today, Townhall, The Christian Post, GOPUSA, BizPac Review, and Jewish World Review. Contact Susan at writestamper@protonmail.com.