Susan Stamper Brown
|
Posted: Dec 04, 2017 12:01 AM
Share   Tweet
The opinions expressed by columnists are their own and do not necessarily represent the views of Townhall.com. 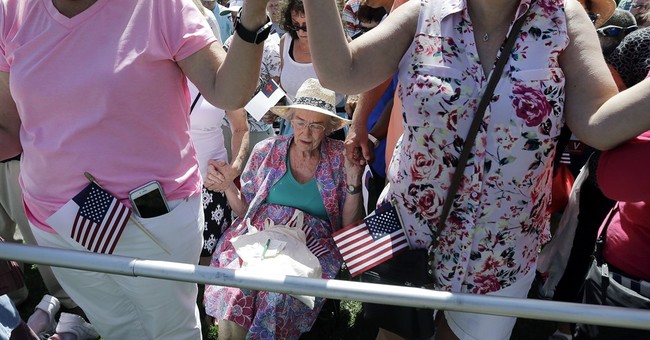 Hypocrite –  hip-uh-krit “a person who pretends to have virtues, moral or religious beliefs, principles, etc.  that he or she does not actually possess, especially a person whose actions belie stated beliefs.”

Donald Trump has been president for a year, yet my social media newsfeed and email inbox still overflow with stupefied leftwing evangelicals who hate Trump (literally) and loathe the conservative Christians that voted for him.

So then, where was the outrage from the same better-than-thou Chardonnay-swirling leftwing evangelical crowd when Christians voted for Obama?

It’s obvious that their condemnation has less to do with evangelicalism or Christianity and more to do with their political leanings.

Otherwise, when Obama was in office, they would have expressed a little of that righteous indignation they currently can’t control when Obama’s policies harmed Christian bakers and nearly sent the Little Sisters of the Poor to the poor house.

If this were about Christian values, they would have joined a “resistance” movement when Obama’s definition of marriage “evolved,” and would have occupied the White House lawn when his administration told boldfaced lies about the slain in Benghazi.

They didn’t hesitate to support a president who was “pro-choice” on third-trimester abortions, but they have zero grace for our current president -- who has already fulfilled promises on key conservative issues like judicial nominations, abortion and religious freedom.

It’s sad to say and quite telling, but Trump’s political positions are more Christian than theirs.

During Obama’s years, there was no condemnation…no resistance…no anger because leftwing evangelicals were more committed to Obama and his leftist policies than they were to Christ.

It doesn’t help that so many evangelical churches today are led by leftist clergy garbed in a cloak of religiosity like one of Obama’s former spiritual advisors, Reverend Jim Wallis, the editor and founder of Sojourners magazine.

In October, Wallis wrote a scathing article titled “The Religious Right Will Rise and Fall with Donald Trump,” condemning evangelical conservatives who support Trump. He wrote, “Trump is the natural conclusion to how the religious right movement began, and what it has become. When it comes to this movement, the operative word is not ‘religious’ (or even ‘Christian’), but ‘right.’ (And for the vast majority of ‘values voters’ who are white Christians, the operative word is not ‘Christian’ but ‘white.’)”

Isn’t that swell? Especially coming from a guy whose organization received funding from none other than George Soros’s Open Society Institute, an organization known for financing groups that support atheism, abortion, and one-world government globalism. A few years ago, Jay Richards at the National Review found that Sojourners received $325,000 from Soros’s organization between 2004 and 2007 and “at least forty-nine separate foundation grants…totaling $2,159,346” from organizations like the Tides Foundation and the Wallace Global Fund, “which also supports ACORN and a cornucopia of population-control groups.” Yes, population-control groups.

Wallis was one of eight ordained ministers and four staff members from Sojourners arrested by Capitol police November 30. According to a video posted on the magazine website, the group was detained while protesting the Republican tax plan in the Senate building. They were shouting scriptures while loudly warning senators their souls were in danger if they supported the GOP’s new tax plan. One woman threatened, “Senators, we put you on notice. Your souls are in danger and this is your final warning.”

It’s good to be concerned about souls in danger, but the train jumps the track when we redefine Christianity by cherry-picking scripture and weaponizing biblical principles to make political points. In his day, Jesus had no patience for people like that. He called them “vipers…hypocrites…sons of the devil.”

If words have meaning, and indeed they do, “leftwing evangelicals” might want to drop the oxymoron and choose one label or the other. Lord knows, they can’t be both.