Fort Lauderdale Shooting: Another One Slips Through?

Susan Stamper Brown
|
Posted: Jan 09, 2017 12:01 AM
Share   Tweet
The opinions expressed by columnists are their own and do not necessarily represent the views of Townhall.com. 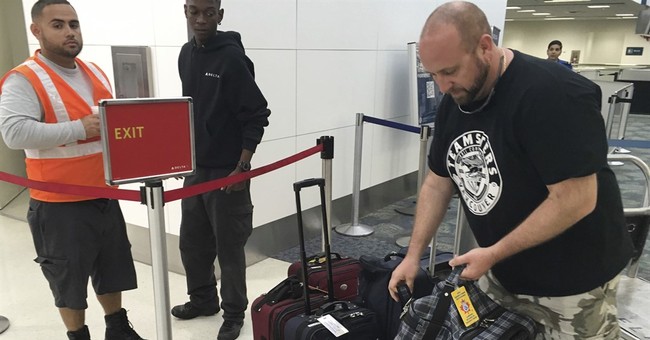 Apparently, we now live in a country where you can walk into an FBI office, admit to being an ISIS terrorist and you aren’t taken seriously, but if you make a small rounding error on your tax return, rest assured, the IRS will come calling.

The shooting in Fort Lauderdale should give sane Americans reason for pause. How many attacks must we suffer before those in charge start fighting ISIS and its sympathizers with the same kind of ferociousness leftists expend attacking American values?

Is the FBI so handcuffed by the Obama administration’s political correctness they cannot identify a terrorist when he walks into their office and identifies himself as one?

CBS News tweeted Santiago walked into an Anchorage FBI office last November “claiming he was being forced to fight for ISIS.” The New York Times reports FBI officials were aware Santiago “had viewed extremist materials on the internet,” reportedly years before he deployed overseas.

Did the FBI miss the easily searchable online picture that the U.K. Dailymail.com and Fox4now.com found with Santiago sporting a keffiyeh-style scarf while shooting what appears to be the “one-finger” jihadist salute? It’s similar to the one Boston bomber Dzhokhar Tsarnaev took posing in front of an Islamic flag in his bedroom.

Santiago’s brother Bryan Santiago told the Associated Press, “The FBI failed there…The federal government already knew about this for months…but they didn’t do anything.”

This has been the pattern for years.

According to the Washington Post, the FBI investigated Omar Mateen, the Orlando nightclub shooter, “for 10 months beginning in 2013, putting him under surveillance, recording his calls and using confidential informants.” Mateen was placed on a terrorism watch list and interviewed twice “before the probe was closed in March 2014 because agents concluded he was not a threat.”

Similarly, Ahmad Khan Rahami, the alleged perpetrator of the September 2016 New York and New Jersey bombings, was also under FBI investigation “more than once over the past years” ABC News reports.  Nonetheless, the FBI found “no clear evidence or indications of radicalization.”

Muslim convert Elton Simpson, one of the assailants in the 2015 Curtis Culwell Center attack in Garland, Texas was under FBI investigation in 2006. Simpson was arrested by the FBI in 2010, but a judge “dropped the terrorism allegations, citing insufficient evidence,” reports the Washington Post. So, at around 7:00 p.m. on May 3, 2015, Simpson and co-assailant Nadir Hamid Soofi fired dozens of rounds at a police car near the entrance to an exhibit featuring cartoon images of Muhammad.

Officials report co-shooter in the 2015 San Bernardino massacre, Tashfeen Malik, passed three background checks before immigrating to the U.S. from Pakistan on a fiancée visa. After the massacre, FBI director James Comey said, “We can see from our investigation that in late 2013,” Syed Rizwan Farook and his fiancé, Malik, were communicating via “direct private messages” about “their joint commitment to jihad and to martyrdom.” A 2012 FBI probe also found that Farook “was in the social circle” with “a group of jihadists in California who were arrested,” including a recruiter, Sohiel Kabir, “who helped radicalize others,” CNN reports.

The deceased Boston Marathon bombing suspect, Tamerlan Tsarnaev, was also under the FBI’s radar “on at least two occasions prior to a Russian government warning in March 2011 that said he appeared to be radicalizing,” reports Politico.com. During a Congressional testimony Rep. Peter King (R-N.Y.) said, “What are the chances of the Russians reporting on someone who’s pretty obscure and the FBI checks him out and finds out his name has come up twice before? Wouldn’t it have warranted keeping the investigation open longer or at least going to the Boston police and warning them?”

If nothing else, this disturbing trend teaches us that the only thing that’ll keep us safe is an administration unburdened by political correctness.