Gender Chaos in an XX-XY World

Susan Stamper Brown
|
Posted: Apr 26, 2016 12:01 AM
Share   Tweet
The opinions expressed by columnists are their own and do not necessarily represent the views of Townhall.com. 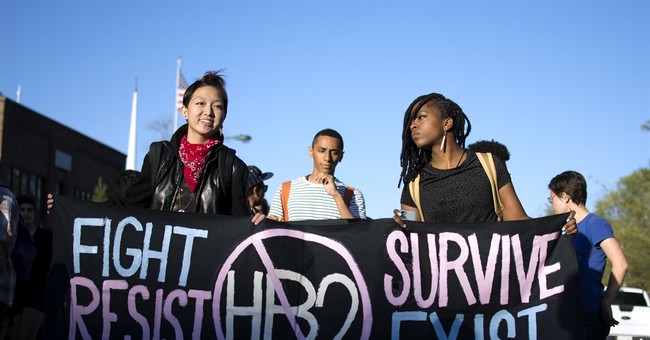 We live in a country where people think it’s okay for has-been rock stars to cancel concerts because of their beliefs, but it’s not okay for bakers, florists and photographers to do the same.

If you ever needed a definition of insanity, well, there you go.

So how did we get here? It’s pretty simple. We no longer live in a society that filters the world through the Biblical prism of “right and wrong” or “good and evil.” In the absence of moral absolutes, people tend to make issues over non-issues and create wars defending non-victims. The latest is the “where to potty” issue, which is really nothing more than a tool used by the left to flush us further down the sewer drain so we can wallow around in the slime and sludge of intemperance and hedonism.

Laws and policies may tell us it is okay for a male stranger to drop his pants or relieve himself in the same room as our women and kids – but the greater laws of decency and morality, and yes, even common sense speak the opposite. The laws of nature also remind us that we can change our appearance but we cannot change our DNA. Simply put, the difference between men and women is in their genes, not the jeans they choose to wear.

But none of that matters anymore. So on one hand, we have people going bonkers over North Carolina’s common-sense Public Facilities Privacy and Security Act – and on the other hand, we have the retail giant, Target, introducing their new potty policy emphasizing “inclusivity.”

In essence, Target’s policy puts the comfort of a minuscule few above the safety of the rest, but those dwelling in their imaginary bluebird-and-butterfly world won’t see it that way. However, down here in the real world where we need to lock our doors at night, it’s fair to say that sexual predators might find Target’s new policy a bit enticing.

One did in Canada. Back in 2012, Ontario, Canada amended its Human Rights Code making gender identity and expression prohibited grounds for discrimination. Not long after, as reported by Lifesitenews.com, a male sexual predator said he was transgender so he could gain access to two Toronto women’s shelters. Once inside, he sexually assaulted several women. Emotion-based, poorly-reasoned policies like this are ripe for abuse.

Obviously, the battle lines are being drawn and it is time for good people to take a stand. But, as we stand our ground for moral decency and defend the safety of women and girls against sexual predators who might take advantage of imprudent laws and policies – it’s important to remember that the gender confused among us are people needing God’s love and compassion displayed to them in real ways – like getting them help. In the meantime, non-gender specific toilets should be made available if they are uncomfortable using the one which aligns with their biological plumbing.

To label this a civil rights issue is to completely miss what’s happening in the real world. In these trying days filled with terrible things like people being burned alive in cages and women and children being raped for sport, let’s take a deep breath, step back and remember to, as a wise pastor once said, “Keep the main thing the main thing.”