Obama’s Response to Oregon Shooting: Take Away Our Guns 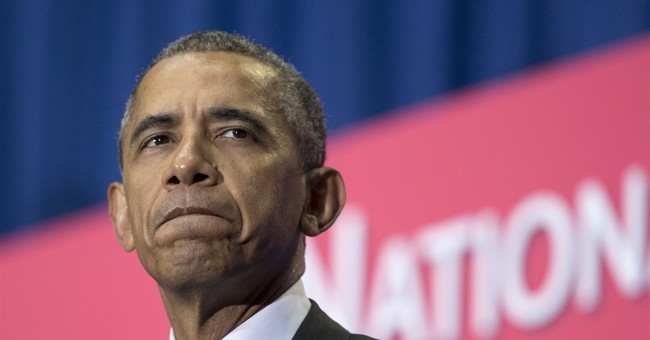 We hear you loud and clear about guns, President Obama. It's a little odd though, that you'd make insinuations about taking our guns away after the recent college shooting in Oregon, especially now that the EU Times reports the Federal Security Service of the Russian Federation (FSB) listed the shooter as an "American black-Islamist terror suspect" not quite the "white Republican" some initially suggested. ISIS also allegedly claimed culpability.

According to EUTimes.net, Chris Harper Mercer "had previously been identified by electronic intelligence specialists within the Foreign Intelligence Service as being an Islamic State adherent after he had attempted to gain passage to Syria via Turkey during the first week of September 2015." The report went on suggesting the Obama regime refused to accept this terror list from the Federation and "Mercer was able to accomplish his terror act" at Umpqua Community College.

We get you, Mr. Obama. If you were really angry about the right things, you'd be angry that witnesses say Mercer religiously profiled people, executing Christians. You conveniently didn't mention that detail in your anti-gun rant October 1 in Washington. Instead you said it was time to politicize the event. Politicize.

We understand you. If you cared an inkling about the genocidal killing of Christians around the globe, you'd have done something long ago. The venomous anti-Christian rhetoric foaming from your mouth is now coming home to roost. Your words matter.

We clearly comprehend your alliances. Without a doubt, you would have held a White House 9/11-style vigil if the Oregon shooter profiled and killed Muslims. You've denied your oath to protect everyday Americans by rolling out the red carpet for untold numbers of non-vetted Muslim "refugees," ISIS says they are sending.

We get you. If you really cared about innocent bloodshed, you'd give speeches from your podium every Monday morning about the black-on-black killings in your beloved hometown. You conveniently overlook all the minority kids being killed by droves in big cities run by your fellow Democrats and instead hone in on law-abiding gun owners. Chicago is Gotham reborn, but in your eyes, there's nothing to see there, time to move on. Move on to more important things like what you see as the real problem. Us.

We see your true colors. And it's not red, white and blue. Hope all you want, but your ideology will never change the greatest country on the face of the earth. America is bigger than you. America is greater than your presidency. America will rise again in the aftermath of this attack on our Constitution known as your presidency. America will be better, greater, because we've learned our lesson. America will never again elect an anti-American-anti-Christian-narcissistic-dictator-wanna'-be as president. Greatness awaits. It's just 402 days, 20 hours, 56 minutes and 20 seconds until Tuesday, November 8, 2016.