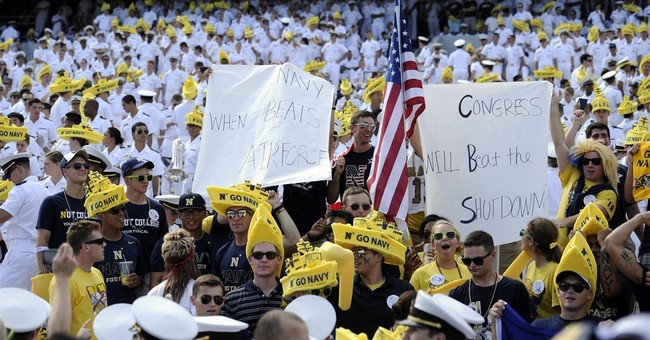 Reasonable people compromise. Unreasonable people do not. Instead, they trample over those around them to selfishly get their way. And the government is shut down this chilly October day in 2013 because unreasonable Democrats behaving like spoiled children would rather refuse treatment to terminally ill children, ravage the economy, disparage veterans and make the rest of our lives miserable -- than compromise.

The GOP has its share of problems, but one thing is absolute: Republicans made reasonable effort to pass legislation intended to keep non-partisan government agency programs running. All they asked for in return was to delay implementation of Obamacare, the Democrat Party's illegitimate lovechild that nobody wants.

Sometimes it's best to walk away. Sir Winston Churchill once so poetically quipped: "In war as in life, it is often necessary when some cherished scheme has failed, to take up the best alternative open, and if so, it is folly not to work for it with all your might." The GOP offered Democrats an easy out...a way to save face...even raise Obama's approval numbers. But sadly, and to the country's detriment, Democrats don't understand the art and value of compromise, let alone engage in it.

Merriam-Webster definition of compromise: "A way of reaching agreement in which each person or group gives up something that was wanted in order to end an argument or dispute."

Obama-Reid-Pelosi definition of compromise: "Name-calling, threatening, and making life miserable until Republicans give up everything and Democrats give up nothing in order to get your way."

What possesses the heart of those who would allow harm to others in order to further an ideology? And how do they reconcile their consciences?

Per the Weekly Standard, the National Park Service was instructed by the Office of Management and Budget (OMB) to barricade D.C.'s World War II Memorial, preventing the dwindling few of America's Greatest Generation from viewing that which was erected in their honor prior to their passing on.

If you wonder who's responsible for such callousness, look no further than Obama. According to Whitehouse.gov: "The core mission of OMB is to serve the President of the United States in implementing his vision across the Executive Branch...It reports directly to the President...to implement commitments and priorities of the President."

During his weekly address October 5, Obama covered his own aversion to compromise with lies. He compared Republicans to "kidnappers" and suggested America may default on its debt because of the GOP. His words seemed to panic the markets when the Dow sunk below 15,000 the next day. Proverbs 22:18 says, "There is one whose rash words are like sword thrusts, but the tongue of the wise brings healing." Obama and Reid are quite the swordsmen these days.

Just when you think they could sink no deeper into this sewage they call politics, a liberal opens his mouth as recently happened when CNN asked Harry Reid why the Democrat-controlled Senate refused to approve a spending bill offered by Republicans that would keep the National Institute of Health open and help "one child who has cancer."

Reid quipped: "Why would we want to do that? I have 1100 people at Nellis AFB that are sitting home. They have a few problems of their own."

So, Harry, why would we want to do that? Maybe a little wisdom from Batman might help? In the movie, "A Dark Knight Rises" lead character Jim Gordon tells Batman "I never cared who you were...but shouldn't the people know the hero who saved them?" Batman: "A hero can be anyone - even a man doing something as simple and reassuring as putting a coat around a young boy's shoulders to let him know that the world hadn't ended."

Or, maybe something as unpretentious as a compromise, so that a terminally ill child will know his world won't end today because someone cared about him more than politics?

Surely, a dark night has risen over this great country as Democrats preside over the dismantling of America, one uncompromising position at a time.