SpaceX Attempt to Shift Blame for Exploding Rockets is a Joke

Steve Sherman
|
Posted: Oct 15, 2016 12:01 AM
Share   Tweet
The opinions expressed by columnists are their own and do not necessarily represent the views of Townhall.com. 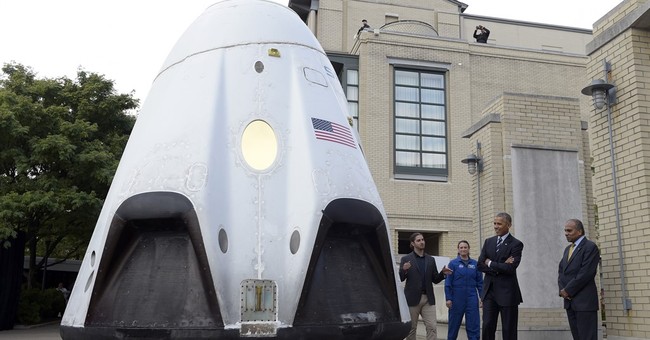 A government contractor repetedly fails to launch rockets into space with expensive cargo, then tries to shift blame from the contractor to competitors.  The recent case of the failing aerospace manufacturer SpaceX trying to hang on to billions in government contracts is embarrassing and will cost taxpayers billions in waste, substandard service and damage if it continues.

On September 1st another SpaceX rocket burst into flames. This time destroying a $200 million satellite as well as the Falcon rocket carrying it. Last year’s Falcon 9 explosion incinerated more than $112 million in government cargo. You might think that Elon Musk, the founder of SpaceX, just likes to blow stuff up in spectacular fashion. Musk definitely likes to give speeches with lofty claims of his company placing a colony of human beings on Mars in the not too distant future. He can spin a tale of warp drives and space exploration with the best of them.

With visions of space travel in our heads, Elon Musk seemingly gets a pass as to the reality of what is going on at SpaceX. We may someday travel to other planets, but for now, Musk and company is firmly rooted on Earth and they are not doing America any favors.

According to the Los Angeles Times Elon Musk’s growing empire is fueled by $4.9 billion in government subsidies.

“The Subsidies Have Generally Been Disclosed In Public Records And Company Filings. But The Full Scope Of The Public Assistance Hasn't Been Tallied Because It Has Been Granted Over Time From Different Levels Of Government.”

Space travel is dangerous and expensive business. Sometimes things blow up. Right? Maybe so, but generally speaking, the engineers and designers of the exploding rocket either get the ax or they go back to the drawing board and ground all launches until said explosion problem is ironed out.

That would be a normal reaction to putting on a hit parade of multi-million dollar Hollywood-style fireballs. Instead, Musk has taken a more intriguing approach to government funded failure.

He’s trying to blame a competitor of sabotage and even a shadowy figure on a rooftop. It’s laughable. I’m waiting for a grainy picture of an alien being sitting atop the missile to be produced next.

I know this sounds like a joke, but it isn’t. According to Business Insider, “An ongoing investigation into the fireball, which occurred at Space Launch Complex 40 (SLC-40) in Cape Canaveral, Fla., has narrowed the blast's origin to a breach in a helium tank.

However, SpaceX has said the exact cause remains elusive.

According to journalist Christian Davenport, writing in the Washington Post, SpaceX investigators have considered "something suspicious" they saw on the roof of its biggest rival: United Launch Alliance (ULA), a company that's jointly owned by aerospace giant’s Boeing and Lockheed Martin.

The unsaid implication and speculation here, an industry source recently suggested to Business Insider, is this: It may be possible that someone could have gotten access to the roof of ULA's building, fired a bullet or other projectile from more than 5,300 feet in the distance, and somehow struck the Falcon 9 rocket's upper stage.

Davenport wrote that, based on conversations with three industry officials, SpaceX (reportedly) "had still images from video that appeared to show an odd shadow, then a white spot on the roof of a nearby building leased by ULA ... The building ... known as the SMARF [Solid Motor Assembly and Readiness Facility], is just more than a mile away from the launchpad and has a clear line of sight to it."

Call it incompetence or a rocket engineering learning curve. A design flaw is the likely cause of the ongoing explosion saga plaguing SpaceX. That is a huge problem when you are trying to get people to put their cargo on your rockets, let alone people hitching a ride to our new colony on Mars.

Trying to blame a shadowy figure on a roof top may be a way to shift blame from the fact that the Falcon 9 rocket blows up more than it launches. However, it only adds to the idea that maybe Musk is a little more tinfoil hat than science.

If that is true, it doesn’t bode well for $4.9 billion in taxpayer money that’s already been thrown his way. After SpaceX blew up a bunch of government cargo they promised to cover the losses in giving the government discounted future launches…actually parlaying the explosion into future business.

For the good of the taxpayer, it might be time for the federal government to take a break from SpaceX.