Not Teaching Computers in a Digital World Is a Problem

Steve Sherman
|
Posted: Apr 15, 2016 12:27 AM
Share   Tweet
The opinions expressed by columnists are their own and do not necessarily represent the views of Townhall.com. 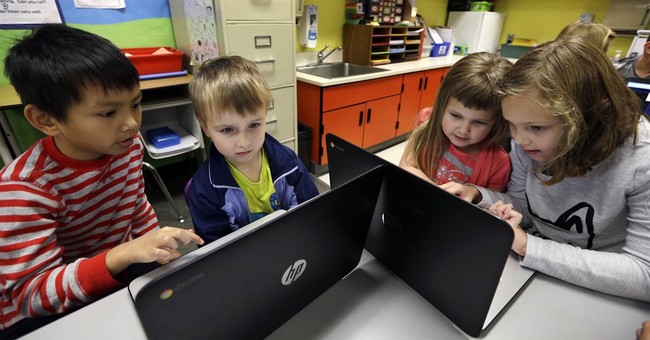 The race to the White House is in full swing. Donald Trump is building walls and candidates from both parties are talking about the hollowed out middle class as good jobs head overseas. Much has been made of the impact of trade and visa policies on the American worker. However, common sense dictates that adjusting these policies won’t solve much if the American workforce isn’t adequately trained to actually do them.

The outsourcing of jobs has been a political football in America for years. The root of this issue lies in the changing American economy and the failure of our educational system to adapt with the times.

Today, virtually all jobs require some computer knowledge. A washing machine repairman recently visited my house. He logged into the wifi and looked up the part he needed and skyped with another tech about the problem, took electronic payment, scheduled a follow up and got the GPS coordinates of his next stop.

The fact that a huge swath of America doesn’t have or aren’t getting these skills negatively impacts the economy, the jobless rate and increases pressure on companies to go elsewhere to find the talent they need to compete.

Does anyone see this as a problem?

Some of these states’ leaders have begun to focus on remedial steps. But their federal delegations have been relatively silent on the issue.

These states boast some powerful leaders in Congress. Senator John Boozman (R-AR) is a subcommittee Chair on the Senate Appropriations Committee. Congressman Tom Cole (R-OK) is the House Deputy Whip and is the Chairman of a House Appropriations subcommittee. Missouri has the powerful duo of Senator Roy Blunt (R-MO) and Claire McCaskill (D-MO). Blunt chairs the Senate's companion committee to Mr. Cole and Mrs. McCaskill serves on the Armed Services and Homeland Security Committees.

It is important that these leaders and their colleagues in Congress come to terms with the national consequences of a workforce unable to keep up with the modern economy. Entire companies have left America to gain access to talent. The exodus of jobs and the trend of outsourcing along with their associated economic consequences will only continue if Americans aren’t capable of doing the jobs here at home.

But it isn’t just the economy they should worry about. National security is one of the biggest reasons we need our own computer expertise. Hackers and nations out to do us harm are many times more likely to attack us through the cyber world than to show up on a battlefield ready to go toe-to-toe with our troops. Computers run our electric grid, our healthcare system and our transportation systems—all of which have seen attempts on them in the recent past. If we aren’t training workers here at home we’ll increasingly be relying on foreign workers to keep us safe.

The reality is that as a nation, we can’t keep training our workforce for yesterday’s economy. Our system must change beginning at the K-12 level. Studies indicate exposure to computer science at an early age increases the numbers of students who pursue a career in the field. For the many others who don’t, they will be better equipped to contribute to our national economic strength and compete in the future economy. The time has come to address this growing crisis.