D-Day, a Lesson in American Exceptionalism

Steve Sheldon
|
Posted: Jun 06, 2019 11:00 AM
Share   Tweet
The opinions expressed by columnists are their own and do not necessarily represent the views of Townhall.com. 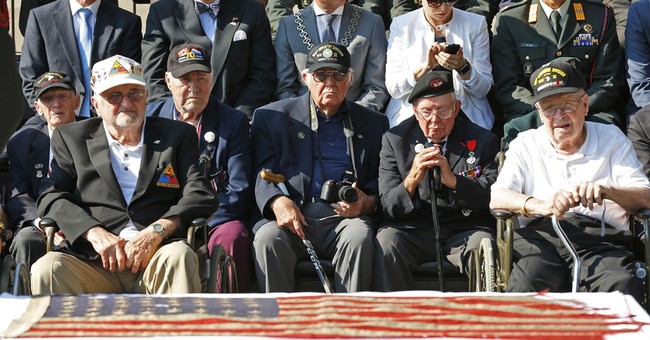 The next time some wild-eyed leftist spouts off about America not being an exceptional country, remind them of what happened 75 years ago on June 6, 1944.

Tell them about Companies D, E, and F from the 2nd Ranger Battalion who, at Point du Hoc, scaled cliffs 100 feet tall under heavy enemy fire from entrenched positions. Their mission was to destroy the large artillery pieces at the top of the cliffs overlooking the landing beaches where thousands of American soldiers would be disembarking. Nothing went right. Several boats were swamped, sank, or hit by German fire before ever reaching the beach. Yet, at the end of the day, five German artillery pieces were destroyed. Within two days, only 90 of the 225 men who started the mission were still in the fight.

I don’t know about you, but I’d call that exceptional.

Or, perhaps, it was exceptional when over 2,000 aircraft and 867 gliders delivered more than 23,000 airborne troops in the dark of night behind German lines in order to cut off reinforcements to German troops along the Normandy coast. Many, if not most, troops missed the landing zones and became scattered over the French countryside. In addition, many aircraft and gliders, along with their crews and the soldiers being transported, were shot down under German fire or crash landed. Large numbers of soldiers were killed or wounded before their mission even began. Despite these setbacks, American troops continued to fight, cutting off German reinforcements and disrupting communication and travel.

The sheer numbers are staggering: 11,590 aircraft flew 14,674 sorties on D-Day. Each aircraft was manned by someone’s brother, father, or son. One-hundred and twenty-seven aircraft were lost that day. Not all were American, but the United States contributed heavily in every category, including the loss of human lives. It is an exceptional country who sacrifices its future sons for another.

Dwight David Eisenhower was an exceptional American. As Supreme Allied Commander, he oversaw forces primarily from Canada, Great Britain and the U.S. The invasion contained elements from 12 different nations in total. He commanded an armada of 6,939 vessels that included 4,126 landing craft, 1,213 naval combat ships, 736 support ships, and 864 merchant ships. In addition to the naval fleet, he oversaw 156,000 landing troops on D-Day alone. That was on day one. Within five days, 326,547 troops, 54,186 vehicles, and over 100 tons of supplies had reached the shores through an ingenious array of portable docks. American exceptionalism? I’d say so.

According to the National D-Day Memorial Foundation, America sacrificed 2,501 lives that day on the Normandy beaches. Each one of these men was exceptional, as were their comrades who were lucky enough to survive and fight another day. Many of them later perished in the fight to free a continent from barbarism and evil.

When faced with obstacles of every kind, American troops improvised and overcame them. What was accomplished that day is the definition of exceptionalism. Sadly, today more space is given in most history books about our country’s past wrongs than what happened on June 6, 1944. It has become merely a footnote in American history, and some would erase it altogether. As these brave men succumb to age, their stories disappear into the pages of history. When those pages aren’t written and their stories aren’t told, so goes American exceptionalism.

It is up to us to tell their story. What they did that day and in the days that followed should never be erased from the pages of history. We should never allow it. We should engage the enemies of American exceptionalism with the same enthusiasm and fervor as these brave men did when charging the beaches of the Normandy coast against the forces of evil. It is our sacred duty as Americans, birthed to us by our founders and passed down to us by every succeeding generation. Thanks to the Greatest Generation, 75 years ago on the beaches of Normandy, freedom lived to fight another day. As this generation fades into eternity, may we take their mantle and carry it boldly into the future. We owe it to the men who sacrificed all their tomorrows for us.