Steve Deace
|
Posted: Jan 16, 2016 12:01 AM
Share   Tweet
The opinions expressed by columnists are their own and do not necessarily represent the views of Townhall.com. 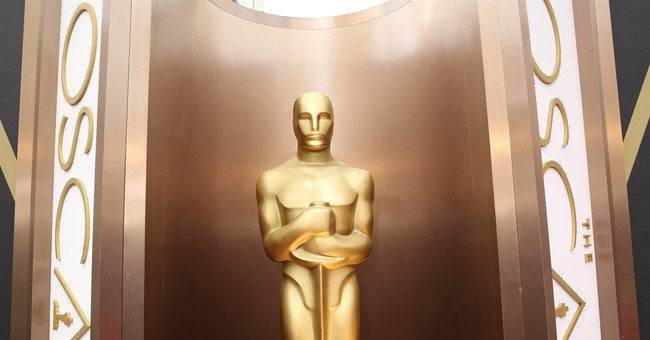 Breaking news: The Oscars are racist.

Riiiiiiiiight, said the prophet Nipsy Russell. Because if the Oscars are racist, then I’m starring in the sequel to Brokeback Mountain.

Yet there it is, and for the second year of race-based fist-shaking in a row. USA Today catalogued the most recent cinematic holocaust thusly: “Once again, the Oscar nominations are marked by a glaring lack of diversity. All 20 slots in the four major acting categories went to white actors when the nominations were announced in Hollywood on Thursday. Last year, for the first time since 1998, the same thing happened. The exclusion sparked outrage online and inspired the hashtag #OscarsSoWhite on Twitter, which was revived Thursday when this year's crop of nominees was announced.”

One of my favorite things about Leftist lunacy is how often it is so obviously self-refuting. For example, since racism is the systematic and ideological diminishment of a select class of people, it is simply impossible to claim such a crime against humanity exists while in the very same paragraph pointing out that we have nearly two decades of direct experience to the contrary.

Although ‘Selma’ was nominated for best picture last year and the phenomenal ’12 Years A Slave’ won best picture two years ago – with two of its actors also earning nominations and one of them, Lupita Nyong’o, winning best supporting actress – somehow the narrative still cries out that we have returned to the Dark Ages.

A more accurate hashtag would be #GoodLuckFindingAJobInTheObamaEconomy, but since this is the era of #BlackLivesMatter, as well as Melissa Harris-Perry actually having her own television show, I guess reality, common sense and rudimentary statistical analysis was voted down.

Not coincidentally, Planned Parenthood claimed the most preposterous moral high ground in the history of faux grievances this week when it sued the group that dared to videotape its death-and-dismemberment-for-profit cult. By the way, somebody thank those baby killers for chasing this ambulance, since it’s going to bring a whole new level exposure to its own butchery. But I digress.

This cognitive dissonance of ours obviously goes deeper than the Oscars or racial affairs. We are dealing with a madness that an entirely non-pasty white nomination slate at the Oscars wouldn’t come close to fixing.

For example, the gangster biopic “Straight Outta Compton” has often been highlighted as one of the films guilty of being snubbed by the Oscars. A movie that plays up (or plays down) to profiting off the worst stereotypes out there. Nowhere to be found, though, in that concern is “War Room,” a powerful movie about a black woman’s redemptive faith in God.

That about sums it up, doesn’t it? Only when gang hagiography is preferred to God’s grace can you come to believe that Leftist Hollywood has suddenly blacklisted you. Because a house divided against itself cannot truly stand to be judged according to the metric of equality – artistic or otherwise -- it claims to have fought for all along.

Once the playing field is actually leveled, then it becomes time to start seeking windmills to fight.

But in an ever increasing competition for status on the grievance call sheet, what are black actors and filmmakers to do? Perhaps those who are angry should take up their angst with the likes of Cate Blanchett, who was nominated for an Oscar this year for playing a lesbian in the film “Carol.” Or how about Eddie Redmayne, whose Oscar nomination celebrates his character’s removal of his genitals in the movie “The Danish Girl.”

Maybe those are your white devils. Instead of black actors like Idris Elba (for “Beasts of No Nation”) or Michael B Jordan (for “Creed”) getting a legitimate Oscar nod, we are having sexual confusion lifted up to the status of sacrament.

“Carol” is set in the 1950s. “The Danish Girls” is set in the 1920s. Those historical motifs are no coincidence. We are being asked to hop on board the “we’ve always been born this way” train and pretend that these movies are in some way the equivalent of “Roots.”

That concept, I wish it would go without saying, is as insulting as a perpetually warm place where souls go for eternal damnation. Perhaps Spike Lee should make a movie about that?