My Rant on the University of Missouri 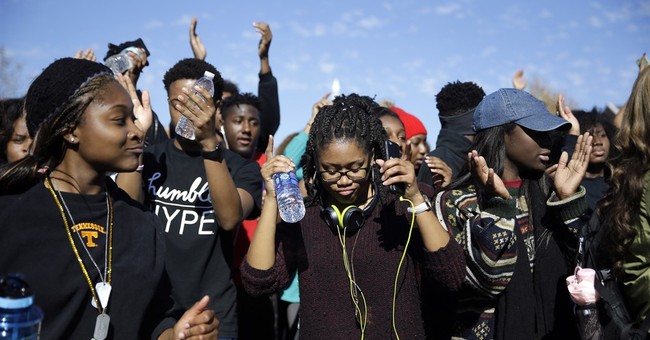 Dear University of Missouri: That’s a nice Tower of Babel you have there.

A black student body president lying about the presence of the KKK on campus. A swastika drawn on a bathroom wall with human excrement. A journalism professor threatening journalism students for the crime of upholding the First Amendment. A police department that stands ready to arrest those guilty of hurting somebody’s feelings. A self-imposed apartheid of black-only “healing spaces.” And the profile in courage that started it all – a college president who resigned and let the inmates run the asylum rather than attempt to hold the line on sanity.

You have sought to make a name for yourselves, indeed, just as the eleventh chapter of the Book of Genesis catalogues. The art of victimization has been taken to entirely new levels because of your idolatrous lust for relevance. Fresh on the heels of a defeat for the secular progressive dreamscape in Houston, when men with an “I feel pretty” complex were told they would not be able to drop a deuce in the girls bathroom, Mizzou swooped in the very next week to make sure the crazy train stayed on schedule.

Give them credit. When it comes to not dropping the ball on total depravity, these guys in academia are clutch.

Whereas their university began its experiment in learning back in 1839 with the motto “Salus populi suprema lex esto” -- Let the Welfare of the People be the Supreme Law – that common language has clearly been replaced with the manifold emotion-based voiced of the tolerance mob.

Supreme law? That sounds like something that might hold me to a fixed standard of behavior regardless of circumstances as a means of controlling my most craven appetites, as well as a lodestar for honoring and preserving the cultural foundations great men and women of the past have fought and died for.

Nah. Mizzou’s new motto: I am as unstable and prone to fits of selfishness as a five-year-old. Hear me roar.

You will be made to care about a pretend race war that would make Rosa Parks wonder if it was worth leaving the back of the bus. You will be made to care about a pretend gender war fought by spastic professors like Melissa Click with 50 Shades of Grey research, studies on the impact of social media in fans’ relationship with Lady Gaga, and a Ph.D. dissertation about the “commodification of femininity, affluence and whiteness in the Martha Stewart phenomenon” as her “muscle.” And you will be made to care about the pretend worship of reason, in which the apprentices of the modern progressive utopia are nonetheless turning on their dutiful liberal masters in hallways, where God has long been declared dead because the end game of such a scam has always been the raw will to power.

One Mizzou professor dared stand in the way of that temper tantrum by insisting his students take their scheduled exams, rather than perpetually wallow in a rich and ironic mix of self-aggrandizement and wounded animal psychosis. Whatever, dead old white man. His logic that "If you give in to bullies, they win. The only way bullies are defeated is by standing up to them. If we cancel the exam, they win; if we go through with it, they lose" was a threatening non-sequitur in a place where the grievance industry is the most coveted advance degree program there is.

You see, the social justice storm troopers have finally reached the clouds and are staring down at the kingdoms of the world from the parapets of their Babel Tower. There is no turning back now, and they plan to rule with an iron fist of ‘tolerance for me but not for thee’ -- a philosophy no less written in excrement than that stupid swastika on the bathroom wall that has shattered so many flaccid Mizzou souls.

I hope you're traumatized by my micro-aggression, and stick your triggers where the sun doesn't shine.