Fight or Flight -- There is No Other Option 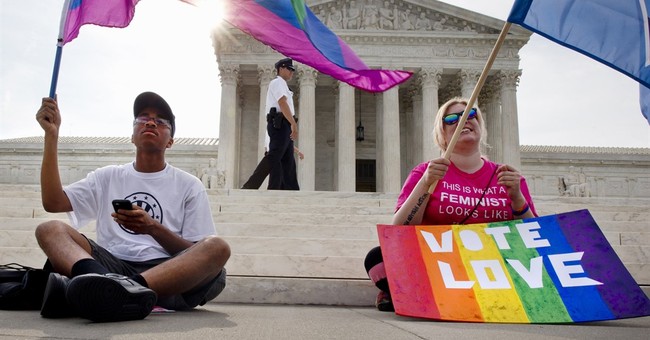 The destruction of the most fundamentally important institution of a civil society has been anointed by five pagan shamans on the Unites States Supreme Court, but let me get back to that in a minute.

There has been considerable sentiment lately, and some of it backed with sound logic and sober forethought, that the progressive experiment could be in its death throes.

Obama has poisoned healthcare, the economy, and race relations. Then there's other fiascos like the Rainbow Jihad against kindly cake baker and florists, Bruce Jenner’s gender-bending, and most recently the bizarre purge of the Dukes of Hazzard and Gone With the Wind. All of this progressivism is too much to bear for the average American, says this line of reasoning, and combines to push regular folks too far.

For that to happen, Christianity is going to have to ante up in a way that its so-called leaders seem ill prepared to do these days. There is no combating chaos with a chaotic spirituality. If that’s the game, then the devil wins either way.

Take for example a video that was released just days ago by the website Catholic.org (which, by the way, produced one of the best faith-based political videos I’ve ever seen leading up to the 2008 election). Several people appear on camera to talk about the challenge of being honest about who they are, with the obvious implication that modern-day Christians feel compelled to stay “closeted” in their beliefs like the homosexuals of yesteryear.

Get to know us, they insist. We aren’t so bad. Love and disagreement can co-exist. We promise.

And while they are right about all of that, there is one big catch: The Rainbow Jihad just doesn’t care.

They will claim friendship with you for years and then will call forth the rabid dogs of legal voodoo against you, if your faith doesn’t allow you to sell flowers at their fake wedding in Washington. They will close down your pizza shop in Indiana if you don’t answer a hypothetical question about catering a perversity the gay way. They will scream ‘let them not eat cake’ in Oregon because a bakery refuses to compromise its principles just to make a buck. And they will, for all intents and purposes, burn down a wedding chapel in Iowa if it dares to say God himself designs one man and one woman for one another.

Want to be "friends" with modern-day Pontius Pilates and Neros? Then sell your soul or else.

The people in the video seem to be genuinely good and holy people, but they need a big helping of ‘wise as serpents’ and a little less of the ‘innocent as doves’ thing. No amount of being nicer than God is going to turn the tide on this culture war. And that’s not me talking.

“If the world hates you, you know that it has hated Me before it hated you. If you were of the world, the world would love its own; but because you are not of the world, but I chose you out of the world, because of this the world hates you. Remember the word that I said to you, ‘A slave is not greater than his master.’ If they persecuted Me, they will also persecute you; if they kept My word, they will keep yours also. But all these things they will do to you for My name’s sake, because they do not know the One who sent Me. If I had not come and spoken to them, they would not have sin, but now they have no excuse for their sin. He who hates Me hates My Father also. If I had not done among them the works which no one else did, they would not have sin; but now they have both seen and hated Me and My Father as well. But they have done this to fulfill the word that is written in their Law, ‘They hated Me without a cause.’ “ (John 15: 18-25)

Those words from the mouth of Jesus Christ himself -- the King of kings and the Lord of lords.

Is that frightening to hear, regardless of the strength of your faith? Absolutely. But is it freeing as well? For my money, it is one of the most liberating passages in all of Scripture. Walk through the valley of the shadow of death? Check. Fear no evil? Check again.

So back to the beginning; yes, sin and stupidity may very well be ready to collapse. But no, that doesn’t mean we just hit the reset button and move on with our lives after the dust clears.

Only a Christian with a titanium spine will be able to see through and outlast this garbage if something good, true and beautiful is ultimately to be preserved for future generations. Pleas of “be nice to me” won’t cut it. The Visigoths are coming for the churches next, and they have no plans to debate the legitimacy of their demands.

You get that they are trying to destroy marriage and morality, not embrace it or redefine it, right?

We can no longer sit in the spiritual equivalent of air-conditioned comfort while the world burns. We must grab a hose and start forcefully putting out the fires of Hell.

And warm and fuzzy is going to get burnt away like the dross.