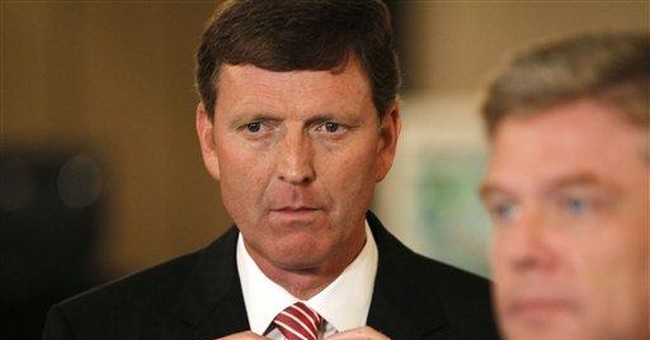 For better or for worse, the road to the presidency begins with the Iowa Caucuses. While the know-it-all class likes to hate on my home state, we have chosen the last four general election winners. And no Republican has ever won the nomination without finishing in the top three in Iowa.

Hate the game, not the player.

Defrocked Scott Walker consultant Liz Mair can complain about that all she wants, but her 15 tumultuous minutes working for the Wisconsin governor’s presidential campaign was a microcosm of the Romney and McCain failures of the past.

What success in Iowa does require is a direct yet winsome message, a devotion to retail politics, and – if the past two cycles are any indication – a pat on the back from a man who has little to nothing in common with the pro-amnesty, pro-killing, and pro-immorality likes of Mair.

That man would be Bob Vander Plaats.

The former gubernatorial candidate and current president of the Family Leader, an advocacy group whose mission is to “strengthen families by inspiring Christ-like leadership in the home, the church, and the government,” has backed the winning horse in the last two GOP presidential caucuses here.

Neither Mike Huckabee nor Rick Santorum looked like sure things at the outset when Vander Plaats saddled up, yet his bellwether status defies his three gubernatorial losses. His unparalleled influence in the Iowa Caucuses derives from his principled nature, and a deep respect for how Iowans conduct their business. We don’t always agree, but I’m proud to call him a friend.

Where others pander, Vander Plaats sees ideas through to their logical conclusion and tells it to you straight. That can be an awkward and uncomfortable experience, especially for long-time GOP stalwarts and devotees who prefer a victorious delusion to a future worth having.

Vander Plaats’ final gubernatorial primary defeat came in 2010 at the hands of current Gov. Terry Branstad, who last November was re-elected to his sixth term in office (1983-1999, 2011-present).

Branstad will become the longest serving governor in the history of this country in 2016. Ironically, though, despite leading his state all that time he will have none of Vander Plaats’ impact at the presidential level.

Whereas Vander Plaats is nationally known for leading the successful charge against retaining three members of the Iowa Supreme Court, who had voted to overturn Iowa's Defense of Marriage Act. Branstad’s return to Iowa’s executive chair after 12 years is known for intra-party strife, the biggest budgets in state history, a 45% gas tax increase, breaking his promise to stop taxpayer-funding of Planned Parenthood, and bureaucratic shenanigans.

The former is a man who was clearly ahead of his time. The latter is a mini-me version of the everyday nonsense that plagues Washington, D.C.

Further confirmation of that came upon the release last week of depositions from a lawsuit involving Branstad and a government employee, who claims he was discriminated against because he was a homosexual.

Despite having a strong case in his favor, Branstad went out of his way to lay out his homosexual-friendly bona fides while also claiming to believe that marriage is between a man and a woman. He insisted that the Iowa Supreme Court case striking down Iowa’s protection of marriage was “the law of the land” – even though the Iowa Code still defines marriage as one man and one woman – and that he was in no way associated with the parties who removed the three judges responsible for the unjust decision.

Then, the kicker: “I am not Bob Vander Plaats.”

Thanks for clearing that up, governor. What, with your sham bullying legislation that will be used to target Christians, your total disregard for an Iowa business that was partially shut down for not bowing to the demands of the Rainbow Jihad, and your acquiescence when the Iowa GOP hired its own Mair clone as a spokesperson, we were having a hard time telling the difference.

We were also clued in that Branstad is no Vander Plaats because of Mair’s tweet-spasm following her dismissal from the Walker campaign: “I don't know everything about Branstad's record, but my general impression is that he's stayed true to himself and his beliefs while running. That takes some balls…And yes, this means I've just been tweeting about Terry Branstad's balls. There, something new to be offended about!”

Wrong again, Liz, Branstad didn’t tell anyone he was going to raise the gas tax 45% while running for re-election last year. He’s also broken campaign promises to stop funding the killing of children, shrink the size of government, and raise personal incomes. Not a bad record of betrayal from a guy with a line-item veto. Oh, and Liz, some of Branstad’s biggest backers are the very ethanol barons you claim to loathe. Liz, you should’ve stopped at “I don’t know everything about Branstad’s record.”

Long-time governor or not, the smell of equivocation and libertinism is not what you want wafting off your presidential campaign, particularly this time around. So when it comes to who the 2016 presidential field should be calling to help catapult them into the Oval Office, Branstad did get one thing right.

He is, in fact, no Bob Vander Plaats.