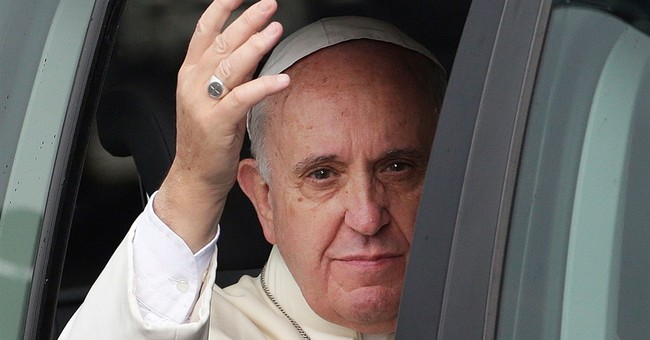 By now we all know that Pope Francis very much fancies the ‘man of the people’ persona he has carved out for himself. Perhaps most of all through his off-the-cuff manner of opining on current events.

So the pope was nothing but his usual self last week when he spoke with the press loaded aboard his papal plane. In the wake of Paris’s Charlie Hebdo massacre, he said it should be clear there must be limits imposed on freedom of expression -- especially when faith is the subject being targeted in our rhetorical crosshairs.

In his own way, Pope Francis probably intended to give a welcome sermon on Christianity 101: "Love your neighbor as yourself." If you don’t, it will be hard to expect love from the world in return. We probably can't be reminded of that enough.

But there’s also a ‘Render unto Caesar what is Caesar’s and render unto God what is God’s’ aspect to all of this, and it is there that the pope may have, at the very least, outrun his headlights.

To interpret Pope Francis’ words as anything other than a mandate to be nicer to people is to invite further civic disaster in a world where Christianity is already losing its footing at the hands of the first-world tolerance mob.

Right here in America, where the First Amendment is emblazoned first and foremost with freedom of religion, a fire chief was fired from his job in Atlanta just weeks ago because he wrote a book about his Christian faith that didn’t play the politically correct notes about marriage and homosexuality.

And over in Virginia, homeschooling parents were recently put on notice by a local school board that they would have to appear and justify why their particular religious exemption from public education was an acceptable one.

That seems an awful lot like a religious test to me, but this whole ‘parents raising their own children as they see fit’ thing has gone far enough, don’t you think? It’s really cramping the style of the left’s Orwellian passion play.

Whether they be formal or informal, speech codes in America are targeting the very people that Pope Francis wakes up in the morning to lead and represent. To say that you shouldn’t voice certain feelings about God or religion is a tool that is already available in the United States, but is regularly being used to bludgeon faithful Christians into silence and submission.

The American public square cannot afford to be further neutered of God’s voice if we have any hope of adequately governing ourselves or handing over a country worth living in to our children. Not to mention the fact every persecutor who is responsible for creating martyrs, dating all the way back to St. Peter himself, also agreed that when it comes to "freedom of expression there are limits."

Furthermore, the American press is in dire need of going in the opposite direction of the pope’s exhortation to curtail speech. The traditional print and television anchors of that industry imposed their own speech codes on themselves long ago, and in the process became such partisan bores that people no longer trust them.

When that happens, you can expect that the vulgar Charlie Hebdo sideshows of the media world will actually proliferate all the more. Or in the case of Hollywood, it’s why you can expect more bastardized film versions of biblical tales like the ones we had about Noah and Moses last year.

We already have enough corners of life filled with people who think they are the very picture of tolerance when in fact they are all too happy to ridicule Christians while marginalizing them as second-class citizens.

Either encourage robust and sometimes uncomfortable debate in the heart of our daily lives and institutions that allow all voices to advocate for themselves with real teeth. Or a road of good intentions, like the one the pope is painting for us, will almost certainly end up in a location where his harassed and beaten flock is the only one being asked to moderate anything.

Then, after all of that, the Islamic jihad will just cut all our heads off anyway.