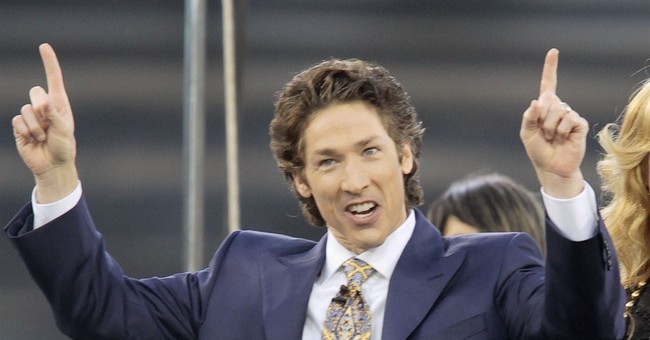 Let’s begin with a pop quiz. If I told you a well-known public figure did the following:

Which side would you say such a person is on?

The “person” in question here is none other than Joel Osteen, otherwise known as “America’s Pastor.”

Pastor of what exactly is open to interpretation, depending on the prevailing winds of pop culture and what helps pad the bank account at the time.

It’s been said the greatest trick the devil ever pulled is convincing the world he doesn’t exist. Satan doesn’t usually show up in a bright red suit and a pitchfork. No, the devil knows we are visually and sensually driven creatures. So Satan is usually glamorous, titillating, and smiling with a bright double-decker of pearly whites. Never forget the most poisonous serpents are often the prettiest.

We fall for it because we judge based on what’s on the outside, and from the outside Joel Osteen has it going on. He lives in a $10 million mansion with his movie-star gorgeous wife. He’s the rare 51-year old man with six-pack abs. His publicity tours generate so much demand scalpers can ask for up to $850 per ticket. He renovated a NBA team’s old arena for $105 million to house the nation’s largest “church” there. His estimated net worth is at least $40 million.

From the outside, Joel Osteen lives a life the world covets. There’s just one problem with that. I can’t think of a single truly great figure in the 2,000-year history of Christianity who didn’t pay some kind of worldly price for defending the faith—beginning with Christ himself at the Cross. On the other hand, it seems as if the world is paying Osteen quite handsomely for the self-esteem gospel according to Joel.

By the way, while the Cross where Christ died for the sins of the world is the most recognized symbol in history, you won’t find one of those at Osteen’s “church.” You won’t find too much talk about suffering, sin, and salvation, either. Instead, you’ll find a lot of shiny, happy people. Just like Joel Osteen. A team always takes on the characteristics of its (life) coach. After being beaten, imprisoned, ship-wrecked, and beheaded for his beliefs, the Apostle Paul who wrote most of the New Testament would be unrecognizable to Osteen’s adherents.

Happiness draws a crowd. We all want to be happy. The problem is what often makes us happy are the instruments of our destruction. For example, we do drugs to be happy, which is why we call it “getting high” and not “getting low.”

But God sees what’s on the inside. And what He sees is that something is very wrong with the inside of us. We’re spiteful, greedy, selfish, dishonest, lustful, prideful, and at times capable of unspeakable evil.

Despite what the progressives claim, we’re not getting any better, either. Nowadays parents sue for “wrongful birth” because they didn’t get the chance to kill their own kids before they were born, and moms publicly boast about “wishing everyday” they could kill their children. The 20th century was the most technologically advanced, prosperous, and educated century in human history—and also the bloodiest.

Thankfully, Joel Osteen is right about one thing. God is good, and He does want what’s best for us. That’s why He sent His Son into the world. Not to condemn the world, but so that through Him the world may be saved from its own (our) wickedness. Unfortunately, this is not the message preached in any of Osteen’s sermons, books, or DVDs.

Meanwhile, in Osteen’s hometown of Houston, the lesbian mayor he prayed a blessing over when she took office has been busy trying to intimidate the church into silencing its public witness. While his peers were being threatened with persecution, Osteen was silent. But cut Osteen some slack, he’s got “A Night of Hope” events booked all over the country. He’s a little preoccupied at the moment, and paying customers get their hope first. It says so right there in the contract.

So why wasn’t “America’s Pastor” singled out for standing up to his pagan mayor’s attempt to redefine morality in his city? When you learn the answer to that question, you’ll know why Osteen is so popular. A culture drowning in its own selfishness, arrogance, and materialism can’t get enough of the forked-tongue philosophy he’s peddling.