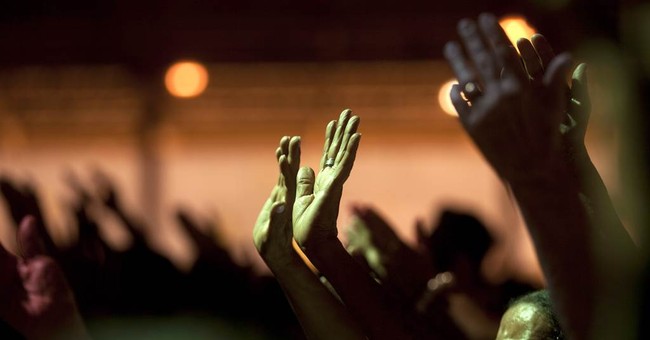 The meltdowns, lawlessness, and crises are coming so “fast and furious” now you can’t keep track of them all, which is why many of you probably missed a recent development that may actually be the biggest threat of them all to our constitutional republic.

This week, the same people who booed God at the 2012 Democrat National Convention openly declared war on their own Maker. For instead of repenting of their attempted tyranny, the statist/Marxist Left’s response to last week’s Supreme Court opinion in favor of Hobby Lobby (i.e. the First Amendment) was to remove any pretense whatsoever they still believe in the U.S. Constitution.

After previously lying…err...claiming that they’d never do anything to stop you from practicing your religion in your church “where it belongs,” the statist/Marxist Left has openly declared war on God and those who still believe what the Word of God has to say about moral matters.

The ACLU and other anti-American groups announced they are withdrawing their support for a heinous piece of legislation known as ENDA. Because with a scant 5-4 majority of the U.S. Supreme Court still believing in the First Amendment, it’s obvious to them that ENDA in its current form wasn’t heinous enough. ENDA, which stands for the “Employment Non-Discrimination Act,” is the unholy grail of the moral depravity lobby. The immorality peddlers have been peddling various versions of this bill for years, but the end result is always the same—you will be made to care.

The intent of this legislation is for the federal government to once and for all make someone’s private sexual behavior a publicly protected class in all of Obama’s 57 states, and thus also silence once and for all any moral or religious dissent to their depravity. Oh, sure, the version passed out of the Democrat-controlled U.S. Senate last year included so-called “religious exemptions.” But absolutely no one smarter than Joe Biden believes the same people who think the Feds can order the “Little Sister of the Poor” to pay for baby-murder, also believes these people are serious about protecting religious liberty.

Now that the High Court they’ve relied on so many times before to impose their statist edicts on the American people by fiat actually sided against them for a change, these anti-American groups on the statist/Marxist Left aren’t even going to pay lip service to liberty anymore. So they will no longer support any legislation that doesn’t tell religious institutions they have to obey man and not God.

Nero would be proud.

That means if you’re a Christian school with a teacher/administrator living an immoral life that undermines your mission, you can’t fire them. Like this example courtesy of Denny Burk at the Southern Baptist Theological Seminary:

Last year, Azusa Pacific University (a Christian school) asked a female theology professor to leave after she began to assume a transgender identity. “Gender identity” is protected under ENDA. If ENDA were the law of the land with no religious exemptions, then it would have been illegal for this Christian school to dismiss this professor. Under ENDA, Azusa would have been in violation of federal law if they were to follow Christianity’s teaching about gender.

These Leftist groups are pursuing a zero-sum strategy against religious groups and individuals. They have declared an all-out culture war and will offer no quarter to sincere religious dissenters. They are ready to use the coercive power of the state to trample the religious consciences of their countrymen. This is radical and chilling.

If you’re a Democrat that takes their faith seriously and you think guys like Burk and I are taking fringe elements of your party too seriously, consider the fact the Democrat majority in the U.S. Senate has “fast-tracked” legislation that would seek to undo the Hobby Lobby opinion. The bill would demand a company pay for abortifacients and baby-murder as Obamacare originally demanded.

Elected Democrats in the U.S. Senate are not the fringe of their party. They are the party. This is who this party has become.

The decades-long right-of-center/left-of-center argument we’ve had since the New Deal about just how much government should be used to even the odds is over now. When Democrat Zell Miller got up and spoke at the 2004 Republican National Convention that was symbolically the end of the old Democrat Party. A party that once claimed to represent the values of working-class and middle-class Americans, as well as ethnic and racial minorities, who believed they needed government as a check-and-balance against corporatism.

The generation of Democrats who gave us the Religious Freedom Restoration Act 20 years ago, which the Supreme Court used as the basis for its ruling in favor of Hobby Lobby, is mostly gone now. Replaced by what David Horowitz calls “the New Left.” This “New Left” is not mere liberals. They are flat-out Leftists. They don’t want to grow government as much as they want to change it. They are Social Reconstructionists, whose goal is to empower government to replace our Judeo-Christian ideals of liberty and morality with what amounts to Cultural Marxism.

And they won’t stop until the American Exceptionalism they either don’t understand or loathe is eradicated once and for all. That’s why their ultimate goal is silencing the church, as all tyrants in history have tried to do, because the church has always been the chief obstacle to statism in a culture.

For the church says that God alone is God, and government is not.

Not to mention with God out of the way, so are your God-given rights, which makes you a de facto ward of the state and not a free person. As Chesterton once said, “Whenever the government removes the god the government then becomes the god.”

You can’t share a culture with people who won’t share it with you. There is no negotiating with these people. You can only convert or defeat them.