Can We Save the Soul of the GOP? 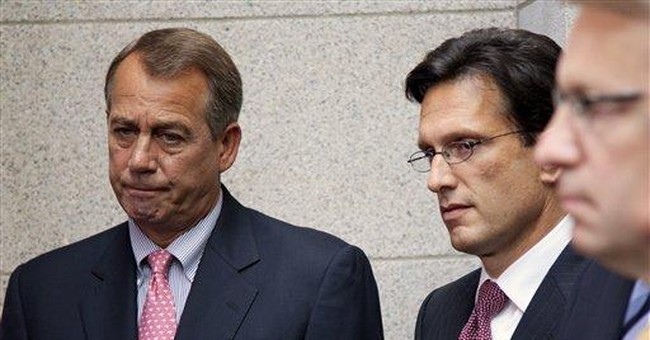 The “Republican” brand is severely tarnished.

These numbers are prompting a national conversation about how to “save the soul of the Republican Party” among conservatives, or if the party is still worth saving at all. Despite the fact I’m a frequent conservative critic of the GOP, I actually think it can still be salvaged by following three simple steps.

1. If you want to save the soul of the Republican Party, don’t try to.

Institutions, organizations, and political parties don’t have souls. Only people do.

So if it seems as if the current make-up of the Republican Party is dysfunctional and unhealthy, that will only change if more people whose souls are in good condition inhabits its ranks and take part in it accordingly.

Want a better Republican party? Then get better people to become Republicans. Speaking of which…

2. We wrongly believe that the base of an organization, institution, or political party determines its strength and health. The exact opposite is true.

The Creator is a God of order, not chaos, and demands accountability to maintain that order. To establish and sustain that accountability, His natural law for the planet operates via a mechanism known as “headship.”

Therefore, the strength and health of an organization, institution, or political party is determined by the integrity of its leadership or the head(s).

If the leaders lack integrity, they will eventually override the noble intentions of the base they represent. We are seeing this play itself out in our nation as we speak. Many of you reading this are patriots ready to fight the statists, but you’re represented by feckless leadership so the fight never takes place. They keep promising us they’ll fight next time, and next time never arrives.

For example, the Creator established the father as the head of the home, which explains why if dad doesn’t go to church the odds his children will once they’re grown are less than 1 in 50. However, if dad does to church regularly between two-thirds to three-quarters of his grown children will as well.

However, here’s what headship is not—a dictatorship. Headship isn’t primarily about authority. It’s primarily about responsibility. Just because you are the head doesn’t mean you have everyone under your thumb to treat as you wish. What it really means is you are ultimately responsible for the people either God Himself or the people who put you in leadership entrusted to you. But the current leaders of the GOP don’t see their headship as a solemn responsibility. Rather, they define their leadership by our followership. Meaning we are to just follow them wherever they take us, even if it’s over a cliff, because they’re better than the Democrats just because.

Therefore, until the leadership of the Republican Party is turned over this party cannot possibly improve. Beware the yeast of the Pharisees, or in this case the current party establishment. Until these people are removed from leadership, and replaced with those who share our courage of conviction, nothing will change for the better. It doesn’t matter if you directly quote the wisest works of human history, and inscribe those words in your party platform. The fecklessness of the current party leadership will just nullify all your noble intentions.

This is why the focus of our efforts should first be on changing the leadership of the Republican Party before worrying about defeating Democrats, because until these current leaders are removed you cannot defeat the Democrats. In fact, as we’re seeing now, these current GOP leaders are often caught conspiring with Democrats against us. Defeating Democrats but leaving this current GOP leadership in place is like closing a bullet wound while neglecting the malignant tumor still in your system.

3. Do not compromise your non-negotiables and core convictions for a political party.

We have a term for institutions, organizations, and movements that demand you set aside your non-negotiables and courage of convictions to serve the group-think.

That term is “cult.”

A baby isn’t any less dead because a Republican killed it. Your children’s future prosperity isn’t any less imperiled because a Republican was recklessly growing government. I’m not talking about purity or perfection in an impure or imperfect world. I’m talking about non-negotiables. Things your moral conscience cannot possibly permit you to defy, otherwise the condition of your soul is imperiled.

A non-negotiable isn’t disagreeing about which is the best means to lessen the tax burden on the American people, loosen the grip of the IRS, and getting the government out of the picking winners and losers business. A non-negotiable is maintaining the current status quo or promising to just manage the decay.

We should have a few non-negotiables, but we should only have a few.