Steve Cortes
|
Posted: Sep 14, 2018 9:42 AM
Share   Tweet
The opinions expressed by columnists are their own and do not necessarily represent the views of Townhall.com. 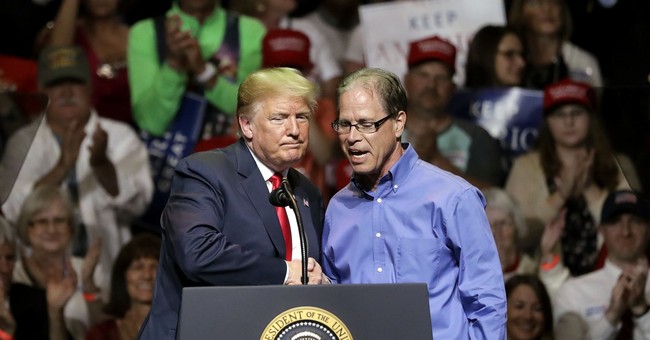 Indiana has made a tremendous amount of economic progress since President Trump took office. If the Democrats win in November it could all be lost.

The President’s America First economic program, which includes tax cuts and reform, deregulation, and strategic tariffs on foreign cheaters, has created an economic renaissance across America.

The economy is once again shining like the sun and Indiana is basking in its glow.

The state’s unemployment rate now hovers near all-time lows, and its economy has added over 28,000 jobs since President Trump moved into the White House. Average wages in the Hoosier State also rose by 3.59 percent during the President’s first year in office.

President Trump’s historic tax reform spurred dozens of Indiana-based companies and businesses that operate in Indiana to give their employees pay raises, bonuses, or extra benefits. One of those thriving companies is Albanese Confectionery in Merrillville. The confectionary is giving up to $2,000 bonuses to all of its employees annually while tax reform is in place, and was able to expand parental leave benefits as well.

Some companies have also been able to pass on savings to customers because of the President’s tax reform, such as Northern Indiana Public Service Company, which was able to lower natural gas rates for its customers.

So long as Republicans retain the majority in the House and Senate, the stunning progress we have seen under the President’s leadership will only be the beginning.

President Trump and Congressional Republicans will be pushing for Tax Reform 2.0, which the President said “will be even more aimed at the middle class” and will make many of the current tax cuts permanent. Republicans in the House introduced the legislation this week.

But if the Democrats manage to win majorities in the midterms in November, there will be no new tax reforms, no tax cuts made permanent, and the reforms already passed may be rescinded. America will once again come last.

This is why Hoosiers must send Democrat Senator Joe Donnelly home in November, and send a Republican to Washington to take his place. Donnelly’s central campaign message is that he is a moderate who will work with President Trump, but there is nothing remotely moderate about Donnelly’s support for wealth-destroying policies, and he has yet to work with the President on any major agenda policies.

Senator Donnelly actually said that he would vote for President Trump’s historic tax reform. Then he didn’t. Do Hoosiers really need another politician in Washington who can’t keep his promises?

Donnelly also voted to eliminate corporate tax breaks, and effectively voted to keep the Death Tax in place. Shockingly, he also voted against a bill that would have given businesses a tax credit of up to 20 percent for expenses incurred in the course of bringing back jobs to the United States. Senator Donnelly literally voted against American job creation.

Donnelly might be able to maintain a pretense of moderation when it comes to issues such as the Second Amendment, but when it comes to your bank account and your job prospects, he’s just another big government liberal working to wreck the American economy.

Thanks to President Trump, America’s economic engine is once again running at full capacity. Indiana has made incredible gains thanks to the President’s economic vision, delivering gains that Hoosiers can ill afford to lose. And make no mistake about it — if the Democrats win a majority in the House or Senate in November, those gains will be lost.

The President’s economic policies have restored hope in Indiana. Don’t let the Democrats steal our future from us in November.