The Bare Truth About Burkinis

Steve Chapman
|
Posted: Aug 20, 2016 12:01 AM
Share   Tweet
The opinions expressed by columnists are their own and do not necessarily represent the views of Townhall.com. 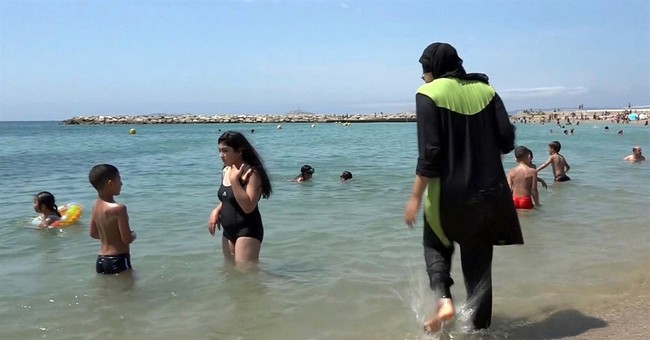 These beachgoers wear a swimsuit called a burkini, favored by some Muslims because it conceals everything but the hands, feet and face. But though Muslims in France are expected to tolerate lavish displays of flesh by others, many non-Muslims feel no reciprocal obligation to let the demure practice modesty.

Some French municipalities have banned these suits from public beaches, claiming to uphold hygiene, secularism and even "public morals." Some French think the burkini signifies sexist oppression. The mayor of Cannes labeled it a "symbol of Islamic extremism."

"France does not lock away a woman's body," exclaimed right-wing leader Marine Le Pen. "This is the soul of France that is in question." That's right; a Frenchwoman wearing nothing but a thong is really baring her soul.

Their argument goes as follows: France must dictate what Muslim women wear to teach them that no one may dictate what they wear. In the name of promoting the freedom of Muslim women, government should deprive them of the right to make their own apparel choices.

It's the logical extension of France's law against full-face coverings, particularly the kind worn by some Muslim women. Supporters of that law, enacted in 2010, said it was needed to keep criminals from concealing their identity. That excuse doesn't work for the burkini, which confirms it was just that: an excuse.

There is nothing inherently oppressive about this swimwear. Presumably, some women don it only because men insist. But there are doubtless other French women who buy skimpy suits in submission to male coercion and social pressures.

Other women are capable of deciding they prefer more coverage. A maker of modest swimwear called Sea Secret was founded by two Orthodox Jewish women -- who report that they sell not only to Jews and Muslims but even to Christians.

When snorkeling, my highly independent wife has found she needs a long-sleeved top and long shorts to keep her fair skin from being torched by the tropical sun. British celebrity chef Nigella Lawson, whose voluptuous upper torso is hardly a state secret, has worn a burkini at the beach to preserve her pale complexion.

These women can think for themselves. Why assume Muslims can't? French-Tunisian historian Leyla Dakhli told The Associated Press there are as many reasons behind such decisions "as there are women in the world." Reading women's minds through their attire is an unreliable science.

If some Muslim men employ violence or threats to control their wives and daughters, the target of government policy should be detecting and ending that sort of abuse. Forbidding burkinis is like trying to combat rape by telling women they can't have sex.

A ban on modest clothing will not emancipate tyrannized females but add to their oppression. A woman whose husband allows her to swim only in a burkini probably won't respond to a ban by letting her venture forth in a two-piece. He will probably respond by not letting her swim at all. Instead of freeing the affected Muslim women, a ban will trap them in their homes.

Marwan Muhammad, executive director of the Center Against Islamophobia in France, told The New York Times that burkinis are a marker of liberation, not repression. "In conservative Muslim countries," the Times paraphrased, "women would never go to a beach with men, much less go swimming, since even in the burkini, the wet cloth sticks to a woman's body, outlining her curves."

Muhammad said that "Muslim women who didn't used to enjoy that day at the beach or at the pool are now taking part. They are socializing." Yes -- maybe even with people who wear more revealing garments, which could be educational for everyone involved.

The key to a free society is the principle of "live and let live" -- accepting your neighbor's right to live by beliefs you may not share, as long as your neighbor extends you the same latitude. Any mayor or other leader who finds the burkini objectionable has a perfectly good option: Don't wear one.

VA to Offer Gender Reassignment Coverage for Service Members
Landon Mion
Want to Guess How Much Media Coverage Was Devoted to the Democratic Party’s Takeover of our Elections?
Matt Vespa