Steve Chapman
|
Posted: Jan 01, 2016 12:01 AM
Share   Tweet
The opinions expressed by columnists are their own and do not necessarily represent the views of Townhall.com. 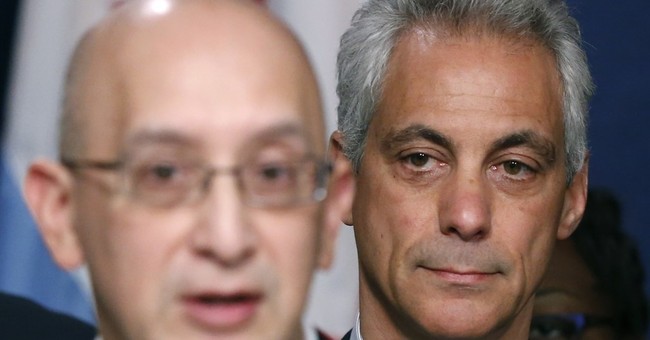 Progress is often hard to measure, but in the coming year in Chicago, there will be one revealing indicator: how many citizens are being Tased. More, note, is likely to be better.

That's the theory of Mayor Rahm Emanuel and black aldermen who want to see fewer people being riddled with police bullets. The mayor announced Wednesday his plan to equip every officer with a Taser, in the hope that more suspects perceived as dangerous will be subdued without the use of lethal force.

The impetus for the change is a series of fatal shootings by cops. One of the most infamous involved 17-year-old Laquan McDonald, who was carrying a pocketknife and walking away from police when Officer Jason Van Dyke shot him 16 times. The other officers at the scene had called for a Taser and were waiting for it to arrive.

It was a classic instance where cops needed a better option than 1) tolerating a dangerous, armed suspect and 2) inflicting death on him. A similar situation arose recently when an officer killed a 19-year-old man who was allegedly wielding a baseball bat -- and a 55-year-old bystander. A Taser might have resolved these encounters without serious injury, much less loss of life.

Emanuel also promised something equally important: better training of police to make encounters with citizens "less confrontational and more conversational." The overall goal is not just to curb police shootings but to make the use of force "the last option, not the first choice."

Tasers are not always a good option. If a suspect is pointing a loaded gun at a cop or attacking with a knife, deadly force is in order. But in some situations, a Taser can be effective in defusing a threat without bloodshed, which is by far the preferred outcome.

There is some evidence to support Emanuel's hopes. A study sponsored by the National Institute of Justice concluded that when deployed in confrontations between cops and suspects, the stun guns have "the effect of reducing injuries to all persons in the conflict." After providing these weapons to all officers, the Phoenix Police Department reported a 54 percent decline in shootings by police.Seattle expanded use of Tasers and then, in 2003, went an entire year without a fatal shooting by police -- the first time that had happened in a decade and a half. "We think a large part of what happened in '03 was a result of Tasers," said Gil Kerlikowske, who was then the police chief and is now head of U.S. Customs and Border Protection?

Steve James, a retired police chief who has instructed police officers in over 30 countries on the use of force, says, "If every Chicago police officer had a Taser and was properly trained in its use, you would likely see a rapid and significant reduction in the levels of force used and related injuries -- to suspects as well as police officers."

Not all experts are convinced. "Over time, the national use of Tasers is not associated with any visible decline in shootings or killings," Franklin Zimring, a law professor at the University of California, Berkeley, tells me.

Like most things, Tasers carry dangers, as well as advantages. Poorly trained or irresponsible cops may use this tool indiscriminately, particularly in situations where they would know better than to discharge a gun. "It works so darn well that officers sometimes use it too early," says Ijames.

When Sandra Bland refused to leave her car during a traffic stop in Prairie View, Texas, the state trooper threatened, "I will light you up!" In 2013, a man died in police custody in South Boston, Virginia, after being shocked some 20 times. A method that is invaluable to officers in controlling dangerous suspects can also be tempting for punishing those who are merely disrespectful or uncooperative.

The success of the Chicago experiment will lie in whether the city provides thorough training and rigorously monitors how the devices are employed. The mayor and police chief need to not only equip all officers with Tasers but make a full commitment to ensuring that officers use them -- and use them appropriately.

Otherwise, the effort will be an expensive and tragic waste, as well as a new danger to citizens. A bad cop with a Taser is still a bad cop.