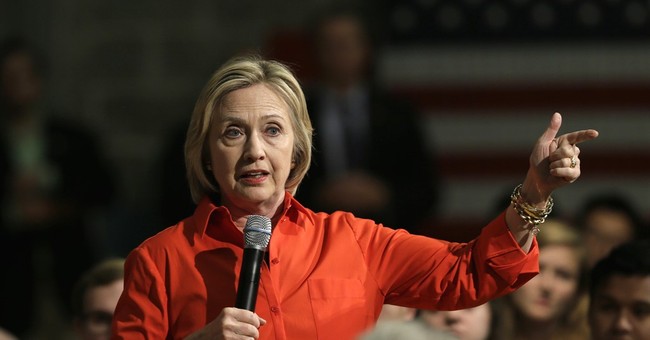 The United States has been at war every day since October 2001, when we invaded Afghanistan after the 9/11 attacks. Never in our history have we engaged in hostilities abroad without interruption for so long. But if Americans are weary of it, you can't tell it from our politics.

If they were, Republicans would not be vying to show their willingness to use force against Russia or Syria or the Islamic State. More pertinent still, Hillary Clinton would not be the front-runner for the Democratic nomination. Democrats were proud to nominate Barack Obama in 2008 on the strength of his opposition to the Iraq War. But anti-war credentials no longer count for anything in Obama's party.

The president himself is partly to blame, having inured his followers to the notion that the United States can't extricate itself from foreign conflicts (see: Afghanistan). But Obama has also refused to be panicked into reckless military action against Syria, Russia or Iran. Compared with what his critics demand, his steps against the Islamic State have been cautious and small-scale.

Obama has been willing to brave criticism for alleged weakness, appeasement and isolationism. As Harvard scholar Stephen Walt wrote for Foreign Policy, he has shown "an appreciation not just of the limits of U.S. power, but also of the (SET ITAL) limited need (END ITAL) to exercise it."

No such restraint can be expected of Clinton. As secretary of state, she pressed for what turned out to be one of Obama's biggest mistakes: the air war against Moammar Gadhafi in Libya, which led to the chaos that has engulfed the country.

She met resistance from then-Defense Secretary Robert Gates, who told Obama "I don't think we ought to take on another war" and considered resigning over the decision to intervene.

Back when that intervention looked good, her emails reveal, she was eager to ensure that she got credit. Lately, though, the left-wing In These Times noted, "Clinton has tended to lay the decision to go into Libya squarely at Obama's feet." Admitting she was wrong? That's not happening.

Her hawkish approach has been consistent. Clinton was far less committed than Obama to reaching a nuclear deal with Iran -- which was ultimately concluded by her successor, John Kerry. She advocated a bigger surge of troops in Afghanistan in 2011 than Obama finally authorized.

After leaving the State Department, she criticized Obama for not doing more to help the rebels in Syria. She also derided the administration's informal foreign policy motto. "Great nations need organizing principles," she insisted, "and 'don't do stupid stuff' is not an organizing principle."

In his 2014 book, "Maximalist: America in the World From Truman to Obama," Columbia University professor Stephen Sestanovich (an adviser to Presidents Ronald Reagan and Bill Clinton) wrote, approvingly, "Of all those who shaped the Obama administration's international strategy, the secretary of state was most comfortable with the precepts of a traditional maximalism."

Obama sees no compelling reason for the U.S. to remain at war indefinitely. Clinton sees no grounds not to. Her basic approach has a lot in common with that of George W. Bush.

It's a measure of how accustomed Americans are to ceaseless war that this worldview is not a liability in the Democratic presidential contest. Both Sen. Bernie Sanders, who voted against the Iraq War, and Martin O'Malley have criticized Clinton for supporting it. How has that line of attack gone down with the party's rank and file? No. One. Cares.

Either most Democrats are comfortable with her approach or they have concluded that more war is inevitable no matter who occupies the White House. That's a radical change from 2008, when Iraq was the defining issue between Clinton and Obama.

The president has drawn some powerful lessons from Iraq and elsewhere about the costs of war, the perils of plunging into places we don't understand and our modest capacity to shape outcomes in foreign crises.

Clinton has not drawn those lessons. She stated a very different credo in 2010, referring to America's role in the world: "We do believe there are no limits on what is possible or what can be achieved." How long will we be at war if she becomes president? "No limits" is what I heard.