Outlawing Prostitution Is a Crime 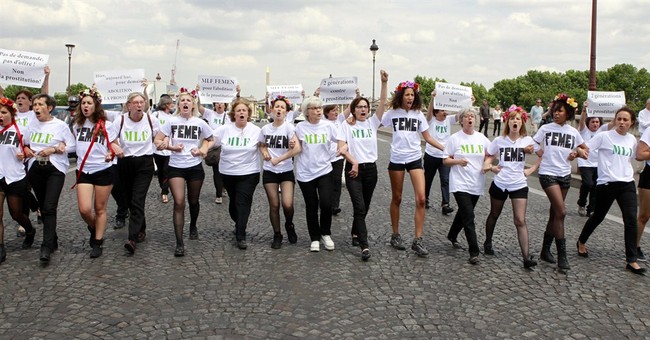 Banning things you don't like has a long history, though not a happy one. Americans have tried banning alcohol, marijuana, pornography and homosexuality. All of them persisted anyway.

Fourteen percent of American men admit to patronizing a hooker at least once -- which adds up to nearly 17 million customers. An estimated 1 million women in the United States have engaged in prostitution.

Faced with this reality, Amnesty International recently endorsed the decriminalization of "sex work." That position has the support of the World Health Organization, Anti-Slavery International and the Global Alliance Against Trafficking in Women.

They grasp that banning prostitution doesn't get rid of it. It merely pushes it underground, where abuses are more likely and harder to detect. As long as it's a crime, says the International Committee on the Rights of Sex Workers in Europe, "sex workers will be at risk of police violence, arrests, rape, blackmail and deportation, and will be unable to report abuse."

Where their trade is decriminalized, prostitutes can more easily work in settings where conditions are controlled, clients are screened and health safeguards are obligatory. They also don't have to worry about being arrested or blackmailed by police.

But Amnesty International's stance brought on a flurry of criticism. A letter signed by feminist activists, clergy and celebrities accused the group of empowering pimps and upholding "gender apartheid." Cindy McCain, chairman of the Human Trafficking Advisory Council at the McCain Institute for International Leadership, called the decision "a heartbreaking abandonment of those being sold for sex each and every day."

Prostitution may be a terrible way to earn a living. But the women (and men) who choose it regard their other options as even less appealing. Barring them from sex work, by definition, makes them worse off.

Amnesty International's opponents insist that the business relies on the enslavement of women. But that's a rare phenomenon. The George W. Bush administration set up 42 Justice Department task forces and spent some $150 million trying to find women and girls forced into prostitution, reported The Washington Post. Over seven years, these efforts produced only 148 prosecutions.

Time magazine says the data "suggests that the majority of people who work in the sex industry do so against their will" -- a claim that George Washington University sociologist Ronald Weitzer, author of the 2012 book "Legalizing Prostitution," says is "nonsense. There are no representative surveys of sex workers, which would be needed to confirm that 'the majority,' or any percentage, of sex workers do so against their will."

Rutgers University criminologists James Finckenauer and Ko-lin Chin interviewed 149 Chinese women who went abroad to engage in sex work. "None of the women we interviewed said they had been subjected to abduction, force or coercion," they reported. Many did it "to make the kind of money they could never make through any other means."

Human trafficking has been discovered in various industries around the world, including Manhattan nail salons. But no one thinks we should outlaw manicures.

But one thing we have learned is that different people have different types of sex for all sorts of reasons that are really no one else's business. Doing it for money is no different.