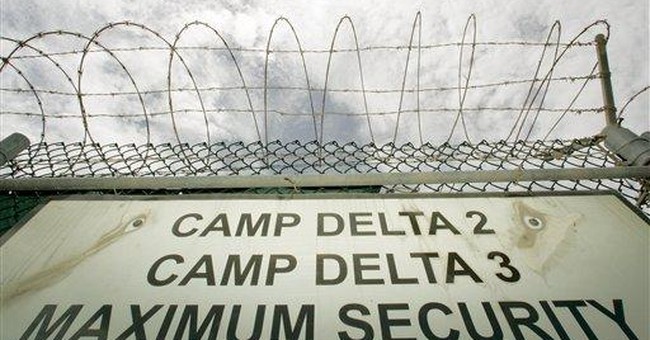 President Barack Obama is a champion of using video cameras to prevent and expose misconduct by uniformed people with guns. He is also a great believer in banning the use of torture on detainees in the war on terror. It may come as a surprise, then, to find that he doesn't want to release videos of Guantanamo inmates being force-fed.

Force-feeding of prisoners is generally recognized as a cruel practice. Obama has expressed reservations about it even as he has approved its continued use. The logic of his two positions comes right out of "Alice in Wonderland": If the images never become public, there is no evidence that he allows torture.

But the images may become public despite his preference. In October, a federal judge who has watched the videos said the government had no adequate reason to keep them secret and ordered their release. This week, the Justice Department appealed that verdict, in hopes of concealing from the American people the tender mercies accorded the hapless Guantanamo captives.

The ruling concerns a 43-year-old Syrian named Abu Wa'el Dhiab, who has been locked up without a trial since 2002. He ought to be a free man by now: Four years ago, an administration review board authorized letting him go.

But the Pentagon fears sending him back to Syria, where he was sentenced to death in absentia for alleged terrorist activities. It delayed so long on an offer by the government of Uruguay to take him that the deal collapsed. So he remains in Guantanamo and, for all he knows, may remain there forever.

His only way of protesting this unhappy fate was to go on a hunger strike. But the Defense Department doesn't take kindly to inmates being uncooperative and putting their health at risk. So he and other hunger strikers have been deprived of the choice whether to take nourishment.

Twice each day, Dhiab is strapped into a restraint chair so a tube can be forced into his nose and down his throat to allow a nutritional drink to be poured into his stomach. His lawyers say the procedure is painful and dangerous, a claim the judge rejected.

Doctors may disagree. "During my training, I placed countless feeding tubes," wrote Kent Sepkowitz, an internist at the Memorial Sloan Kettering Cancer Center in New York, in The Daily Beast. "Without question, it is the most painful procedure doctors routinely inflict on conscious patients." He added: "The procedure is, in a word, barbaric. And that's when we are trying to be nice."

Guantanamo personnel may not try so hard. Lawyers for the inmates accuse them of inflicting unnecessary suffering to punish the recalcitrant.

In any event, the practice is impossible to justify. The UN Human Rights Commission classifies it as torture, and the World Medical Association is on record saying, "Forcible feeding is never ethically acceptable."

It's not just mushy-headed foreigners who take this view. An independent panel led by former Reps. Asa Hutchinson, R-Ark., and James Jones, D-Okla., issued a report last year condemning the practice. "Forced feeding of detainees is a form of abuse and must end," said the group. If the administration believes the practice is humane, it ought to release the videos and prove it.

The president insists he wants to put the prison out of business. "Guantanamo is not necessary to keep America safe," he has said. "It is expensive. It is inefficient. It hurts us in terms of our international standing. It lessens cooperation with our allies on counterterrorism efforts. It is a recruitment tool for extremists. It needs to be closed." In the meantime, though, "I don't want these individuals to die."

But if we can't find a way to discharge inmates who have been approved for transfer, that decision should be up to them. Just as medical personnel may not force lifesaving medical treatments on unwilling patients -- even prisoners -- they may not force sustenance on them just to keep them alive.

Even if it were appropriate to use force-feeding to prevent death, that's not actually the custom of Gitmo, where prisoners are subjected to it long before their lives are in jeopardy. But if an inmate thinks he is better off starving himself to death than facing the prospect of indefinite confinement, he might just be right.

Some Americans think Dhiab should leave the detention facility only in a pine box. If he wants to accommodate them sooner rather than later, let him.