The Latest War Will Not Be Free 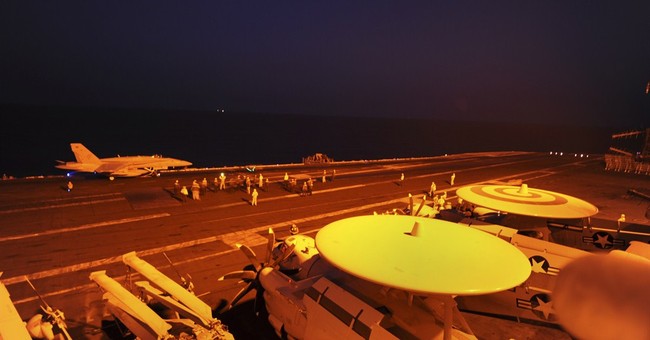 Young people may find it hard to believe, but going to war used to be a big deal. When the United States started bombing Iraq in January 1991, Americans somberly watched President George H.W. Bush address the nation, followed by live video of Baghdad being bombed. The Bush address drew the biggest audience TV had ever had.

This past week, by contrast, life went on normally as U.S. warplanes and Tomahawk missiles destroyed targets in Syria and Iraq in a new war, which has no clear goal or time limit. As our leaders took us into a conflict fraught with peril, most people yawned. We're at war again? Oh, right -- and rain is still wet.

Since the end of the Cold War, the U.S. has been at war two out of every three years. Remember Somalia? Bosnia? Kosovo? It's hard to decide whether this is our third war in Iraq or a continuation of our second, which began when Johnny Manziel was in the fourth grade. Our fight in Afghanistan has been going on for 13 years, five years longer than the Vietnam War.

This one, Secretary of State John Kerry said, could last two or three years. He doesn't appear to worry that the American people's patience will run out before the administration leaves office. Though they occasionally get weary of particular conflicts, they rarely evince strong resistance to new ones.

There are many reasons for that. The 1973 abolition of the draft was a worthwhile achievement with an unfortunate effect: divorcing most people from the tangible consequences of war.

A lot of parents would be warier of Obama's bombing campaign if they had to contemplate that one day, the gods of war would demand the healthy bodies of their sons and daughters. Young people would be likelier to march in protest if they feared being sent to Syria against their will and returned home in coffins.

Most of us are even further removed than the Civil War-era humorist Artemus Ward, who said, "I have already given two cousins to the war and I stand ready to sacrifice my wife's brother."

The majority sacrifices nothing noticeable for the privilege of reminding the world that we can blow up whatever we want and kill whomever we want anytime we choose. For the time being, we don't even have to put up any money.

The latest war will cost some of that, though how much is anyone's guess. Asked the likely price tag, White House press secretary Josh Earnest replied, with charming nonchalance, "I don't have an estimate on that."

Members of Congress show no sign of weighing the benefits of this operation against the outlay. Nor do voters, because they have no reason to. It's a free lunch.

It hasn't always been that way. During World War I, Congress raised taxes twice to pay for sending an army to France. During World War II, President Franklin Roosevelt proposed the biggest tax increase the nation had ever seen. Treasury Secretary Henry Morgenthau didn't sugarcoat it: "The new taxes will be severe, and their impact will be felt in every American home."

During Vietnam, President Lyndon Johnson pushed through a surcharge of 10 percent on all personal and corporate income taxes. He justified it as a way to "finance responsibly the needs of our men in Vietnam."

Our government may provide for the needs of those fighting this war, but not in a fiscally responsible way. George W. Bush launched two invasions while cutting taxes, not raising them. Barack Obama is happy to let Americans assume the funding for this war will come off the money tree in the Rose Garden.

It won't. It will all have to be borrowed and repaid, with interest, by us or our children. The total cost of Bush's Iraq and Afghanistan wars will come to at least $4 trillion, according to a study by Harvard scholar Linda Bilmes. Had we known that -- and had we been forced to make a noticeable sacrifice with every paycheck -- we might have insisted he do things differently.

If Obama and Congress had agreed to impose immediate new federal burdens on American taxpayers before launching this latest war, public attention would be greater and resistance would be stronger. We would at least have had a real debate.

Nothing would do more to break our addiction to perpetual war than a simple requirement that everyone can understand: You want a war? Pay for it.