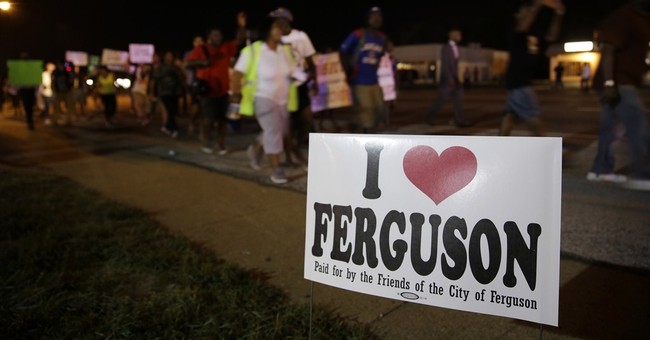 Trending
Not all the residents of Ferguson, Missouri, are black; not all of them are out protesting; and some think the protesters are neglecting a better option for change.

"There are so many people here that don't vote, but they think they have the rights to everything in the world," one man told NPR. "The reason that in the African-American community there's less power is that they're not registering to vote," former Mayor Brian Fletcher told NBC News.

They would not necessarily get an argument from African-American activists. When the Rev. Al Sharpton visited Ferguson, he had stern words for black residents. "You all have got to start voting and showing up," he thundered to a church congregation. "Twelve percent turnout is an insult to your children."

Actually, 12 percent was overstating it. In the 2013 local election, only 6 percent of Ferguson's black residents cast ballots. That's one reason nearly every local elected official is white.

Tony Lee, a commentator on the right-wing Breitbart website, charged that they "have essentially disenfranchised themselves and are responsible for empowering the 'white power structure' that they have been complaining about after (Michael) Brown's death."

So both left and right are agreed: More voting by African-Americans in Ferguson would be a good thing. That's how democracy works. If they want to change how the police and other government bodies work, they should go to the polls.

But not everyone is so keen on the idea. Amid the protests, a couple of local women set up a booth in Ferguson to register voters. "We're trying to make young people understand that this is how to change things," one explained.

The reaction of the Missouri Republican Party was not elation. "Disgusting" and "completely inappropriate" were the terms used by Executive Director Matt Wills. "If that's not fanning the political flames, I don't know what is," he said.

Wills' comments were called "dumb" by one GOP state legislator. But he seems to be in a lonely minority. Encouraging voting by African-Americans is not a conservative cause these days, in Missouri or elsewhere.

Just the opposite. In 2006, the state's Republican governor signed a bill passed by the Republican-dominated Legislature imposing one of the strictest voter ID rules in the country over objections that it would hurt the poor, who are disproportionately black.

Nor was there a genuine evil to be eliminated. "No evidence was presented that voter impersonation fraud exists to any substantial degree in Missouri," a trial court found. The state Supreme Court struck down the law, saying that "the 2002 requirements, which are much less restrictive on the right to vote, have been sufficient to prevent this type of fraud."

But Missouri Republicans didn't give up. They tried to get a constitutional amendment on voter ID in 2012. This year, the Missouri House approved a ballot measure authorizing the kind of requirements the state Supreme Court rejected. Missouri's Democratic secretary of state, Jason Kander, estimated that 220,000 Missourians lack the specified state-issued photo IDs the measure called for.

This approach has become a major GOP cause in state after state. The justification is that strict voter ID rules prevent election fraud.

But Loyola Law School professor Justin Levitt undertook to examine every alleged instance of in-person voter impersonation since 2000 anywhere in America. He found 31 reports, not all of which were confirmed. Those were out of more than a billion ballots cast.

At best, the tighter rules would have prevented a few illegal votes that had no effect on outcomes. But Levitt notes, "In just four states that have held just a few elections under the harshest ID laws, more than 3,000 votes (in general elections alone) have reportedly been affirmatively rejected for lack of ID." It's a safe bet that the number of eligible voters kept out of the voting booth far exceeds the number of fraudulent ones.

Black residents of Ferguson should have no trouble figuring out the message here: Some would rather they vote than protest. Some would be even happier if they did neither.