When Kids Show Up at Our Borders 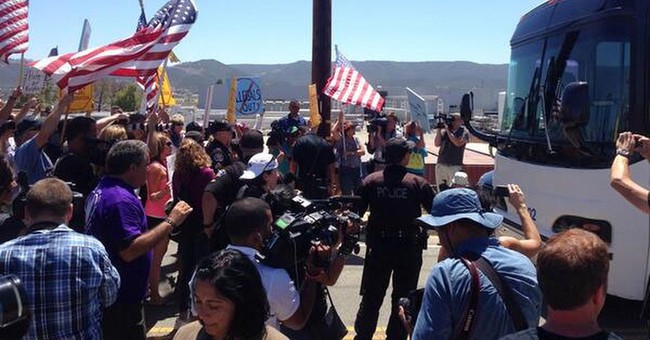 An undocumented foreigner crossed the Rio Grande near Hidalgo, Texas, the other day. He had spent three weeks traveling from Honduras, and he was carrying only one thing with him: a birth certificate. He was hoping to find relatives in San Antonio or Maryland. His name is Alejandro, and he's 8 years old.

His story and photo appeared in The New York Times, providing a stark reminder that illegal immigration often involves harmless individuals who are guilty of nothing. From the angry reaction to the surge of unaccompanied minors and mothers with young children crossing the border in recent weeks, you might just forget that.

Recently Murrieta, Calif., Mayor Alan Long denounced the transfer of undocumented immigrants to a local facility, and a city councilman worried that, as The Desert Sun reported, "the immigrant families would bring disease and crime." Between 200 and 300 protesters formed a human wall to block buses carrying the foreigners. That's not a big turnout for a city of more than 100,000.

Fox News fed the fears with a lurid story on its website quoting unnamed sources who said children housed at a Texas Air Force base had measles, chicken pox, scabies, not to mention that "lice would just be climbing down their hair."

Of course, lice are not unique to these youngsters; the Centers for Disease Control and Prevention says that "6 million to 12 million infestations occur each year in the United States among children 3 to 11 years of age." But accusing foreigners of bringing disease and filth is a favorite tactic of nativists.

Much of the reaction stems from motives that are anything but pure. One protester in Murrieta told CNN, "I just wish America would be America again because it's not, and it's not just pointed to the Hispanics."

But there has indeed been a tide of arrivals that badly strain the government's ability to handle them. Republicans blame it on President Barack Obama. Texas Attorney General Greg Abbott accused him of "policies that entice children to navigate more than a thousand miles away from home, going through the most treacherous conditions, facing things like human trafficking and sexual assault." By this, he presumably had in mind the administration's deferral of deportation of some children brought here illegally by their parents ("Dreamers").

One thing critics ignore is the federal law that expanded protections for children who may be victims of human trafficking -- signed by President George W. Bush. "Longer processing times created by the 2008 act mean longer wait times for the minors in immigration detention facilities," writes Cato Institute analyst Alex Nowrasteh. The result has been more kids than places to house them.

U.S. law calls for immediate deportation of children from Mexico who are apprehended at the border -- but forbids it for minors from other countries. Their fate is ultimately up to immigration judges.

The claim that Obama's action to help Dreamers unleashed the flood is plausible but unproven. It's entirely possible that smugglers try to drum up business by telling parents that kids who make it here will be allowed to stay. But presidents can hardly design policies based on how they may be distorted by self-seeking felons.

Experts say other factors predominate. The Migration Policy Institute says kids are coming "to escape violence, abuse, persecution, trafficking and economic deprivation." Caitlin Sanderson, program director at the Esperanza Immigrant Rights Project in Los Angeles, told The Washington Post her staff has talked to some 600 unaccompanied children about why they came and said, "I have not come upon one intake form that says, 'because of a rumor that says I can stay here.'"

Of the five countries with the highest murder rates in the world, four are in Central America. The United Nations High Commissioner for Refugees found that nearly half of the children interviewed said they had been harmed or threatened by criminals.

The flow of foreigners would be more predictable if our immigration laws provided more avenues for those who want to come here. If you block off legal avenues for desperate people, they will find illegal ones. Even a huge expansion in the border enforcement has failed to change that elemental reality.

The surge of kids is a logistical and humanitarian challenge, but not a dangerous wave of pestilential predators and vermin. In pondering immigration policy, it's sometimes useful to keep in mind that we are, after all, talking about human beings.